There is a glut of free content headed to Saber Interactive’s panicky multiplayer shooter World War Z. Publisher Focus Home Interactive has released a timeframe for this first phase of DLC.

May will see a new mission made available in-game, set in Tokyo, Japan and featuring an all-new zombie type, one that is capable of spitting deadly venom and can even resurrect itself if not properly obliterated. This will be followed in June by the implementation of an extra difficulty level – six skulls – which will increase the risk but also the reward for those brave (or foolhardy) enough to take it on.

July will add a new Weekly Challenge mode, allowing players to log in and complete specific tasks for extra bonuses. Also coming for summer are a stack of character skins, accessories and weapon variants. More content and updates will be rolling out over time, including a Survival Mode, private lobbies, and further visual customisation options for the PC release. 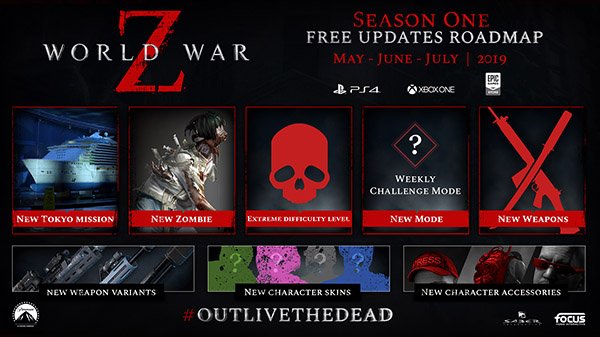 World War Z is available now on PS4, PC and Xbox One.