Yooka-Laylee and the Impossible Lair guide: All secret exits and hidden bees

We found ’em so you don’t have to

There are 48 bees to find in Yooka-Laylee and the Impossible Lair, and they’re important because nabbing as many as possible is the only way most people will get through the final challenge. Clearing the Impossible Lair is needed to beat the game, and it’s a gauntlet that’s much more difficult and taxing than anything that’s found in any of the other 40 levels. Every bee that’s collected adds one health point during the Impossible Lair, so having all 48 gives you the most wiggle room when attempting it — and you’ll probably still fail at least a few times.

Getting 40 of the 48 bees is self-explanatory. The reward for getting through a new level is one bee. There are 40 levels in Yooka-Laylee and the Impossible Lair, thus, you’ll have 40 bees by playing everything once.

That means that eight of the bees are hidden somewhere in the world. We’ve found them all. Four are earned by sniffing out secret exits to certain levels. The other four are cleverly hidden in the overworld. We’ve put together two videos to point you right toward all eight of them.

The video that’s embedded above shows the four secret exits in Yooka-Laylee and the Impossible Lair. I’ll break down what’s needed to find each one.

The first secret exit is in Chapter 5: Gasping Glade. This is by far the toughest secret exit to execute. I wouldn’t attempt it until you’ve unlocked four tonic slots and a handful of specific tonics. You’ll probably need these tonics: Roll Faster, Roll Even Faster, Tri-Twirl, and Slow Mo.

[Update:You can probably disregard all the super-precise platforming in the video. It seems like you just have to wait a long time for the platform to come all the way to the left to pick you up.]

The actual exit is found toward the end of the level, right where you’d normally take a green door. To the right, there’s a tunnel of toxic sludge that seems like a dead end. Instead, hit the Slow Mo ability and roll quickly, jump just before hitting the sludge, and Twi-Twirl onto the enemy. Getting through the tunnel without dying seems like it requires frame-perfect timing. Once you’re safely on a ledge, patiently wait for the moving platform to come back to the right. Duck under the spikes and hop to the secret exit. Be proud that you managed to get this one.

The second secret exit is in Chapter 7: Production Path — Panic. This is the most obvious one of the bunch. It’s found during the section where you’re sandwiched between two moving lasers. Eventually, you’ll come to a small platform that you can buddy slam through. It’ll be easy to notice because it looks like a colorful dimensional spiral right underneath your character. However, note that you need both Yooka and Laylee to pull off a buddy slam. If you took a hit and Laylee’s gone, intentionally die so that you start at the last checkpoint with both of them.

The third secret exit is in Chapter 14: Hazard Hanger. This one’s pretty easy too. Toward the end of the level, you have to cling to some netting as a crane moves across a giant chasm. Eventually, you see the spot where you’re supposed to hop off. Instead, keep riding it and it’ll take you upward toward a box that houses a ghost quill. Smash the box, grab all the quills in the pattern, and this will reveal the secret exit. It won’t show up if you don’t get all the quills before they disappear.

The final secret exit is in Chapter 16: Queasy Quay — Climb. For this one, you should probably equipRoll Faster, Roll Even Faster, and Slow Mo. Near the end of the level, there’s an area off to the right with a green pipe you can walk through. On the other side, there’s a lever that drops a piece of metal that houses a bunch of quills. However, you want to make it through before that metal drops, because there’s a pipe on the other side. Slow Mo makes the timing easier, and the rolling faster tonics ensure you’ll blaze across the gap. Through this pipe is the last secret exit.

The four bees in the overworld are all relatively easy to find. However, note that the video that’s embedded above shows everything after I’ve already solved some puzzles to get through those areas. So, you’ll have to work through the environmental puzzles (that are required to progress anyway) before you can get these bees.

The first bee is found near Chapter 8, where all the wind-blowing rocks are. It’s in a stairwell atop some platforms, over on the right-hand side of the area.

The second overworld bee is near Chapter 14, in the desert. (Technically, you can get the third bee before this one, but I’m just going in the order in the video.) Go to the nearby switch that moves a platform — it’s a bridge when the platform is horizontal, and it opens the entrance to a cave area when the platform is vertical. Make it vertical and fall down the hole. Then, go through the cave, emerging above the hole. Carefully walk across the lip of the platform and nab the second bee.

The third overworld bee is close to the second. By Chapter 9, walk over to the house where the furnace needed to be cooled down. Descend through the chimney. Exit through the right of this room, and then exit through the top of the next room. Finally, roll through the crack in the wall in front of you to grab the third bee.

Finally, go to Chapter 15 and swim all the way to the south west. There’s a beached area you can stand on. Carefully roll and jump to the left to get up on this ledge. (It’s a tricky jump and it doesn’t even look like an area you’re supposed to be able to access.) Walk up and around to earn the last bee. 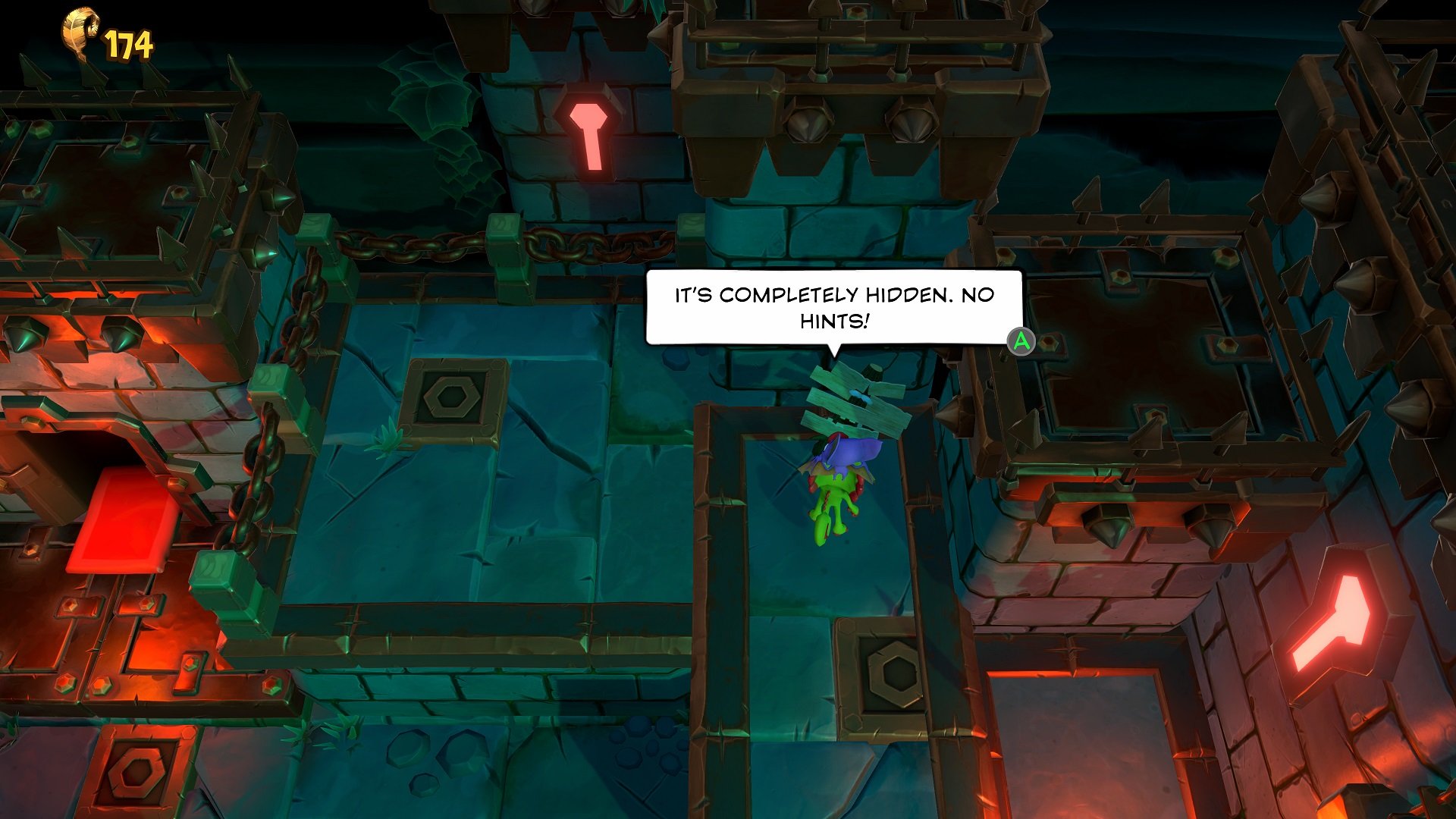 Those eight bees are the vast majority of the biggest secrets in Yooka-Laylee and the Impossible Lair. However, there’s one more that might leave people stumped for a while. The game teases that the final tonic is well-hidden somewhere in the overworld. One of the last hints from a signpost reads “There’s a secret hidden somewhere on the overworld. It’s completely hidden, no hints! But someone will find it eventually… Maybe check online? Good luck, everyone!” We’ve got the bees, but we don’t have the buzz about this last secret.

[Update:The secret tonic has been found. User Archavia on PSNProfiles discovered it after a reddit AMA with the developers. It’s in the area by Chapters 12 and 13, the lake that gets frozen and unfrozen. To get it, you need to buddy slam on top of the right-most post over by the fire berry bush. Here’s a picture with the exact location. It unlocks a gritty comic visual filter.]