47 has a hectic schedule ahead with Hitman 3's February content

Take a day off, mate

Hitman 3 appears to have had the same impact for the long-running stealth franchise as Yakuza 0 had for the adventures of Kiryu Kazuma. While the Hitman series has always been popular, a quick look on social media implies that IO Interactive’s newest sequel has brought a flurry of wannabe sharpshooters into the World of Assassination.

And already the Danish developer is offering players new content for the sequel. Yesterday saw the return of Escalation Contracts – essentially new missions and marks to eliminate in already established locations. The first contract sees Agent 47 return to Thornbridge Manor in order to stage a series of unhappy accidents.

February 11 will add a new Featured Contract – produced in association with YouTube series MinnMax (me neither). February 18 adds a throwing knife-exclusive Escalation, while on February 23 Deluxe Edition owners can enjoy a special premium Escalation, The Proloff Parable, which sees “The White Shadow” pick their way through a snow-covered train as it ruses through the Carpathian Mountains. 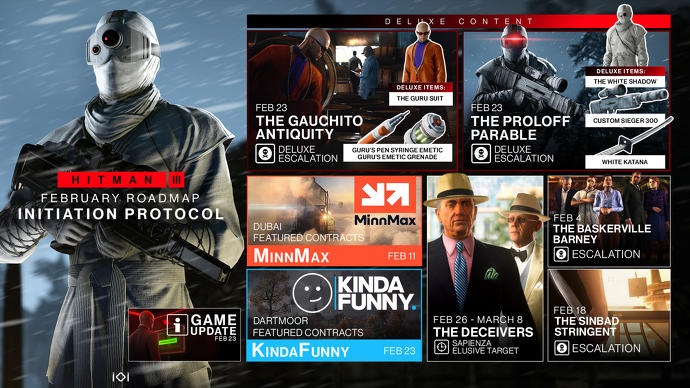 It’s not over, as February 23 sees the arrival of another Escalation, The Gauchito Antiquity, which sees 47 don the gear of The Guru for a spot of poison-pen action. A Kinda Funny-sponsored Featured Contract sees the action return to Dartmoor once again, while Hitman 3‘s first Elusive Target will be visiting Sapienza between February 26 and March 8 – so maybe take a detour to track down this limited-time target.

That’s a lot of work for our boy, 47, and it’s only the first month! Better stock up on piano wire.