Try not to confuse it with that other game

“Battle royale” is a ubiquitous term in the gaming media right now, constantly finding its way into headlines as more developers and publishers jump on the bandwagon, hoping to find the same success afforded to PlayerUnknown’s Battlegrounds and Fortnite. We’ve heard whispers of EA and Activision getting into the genre with Battlefield and Call of Duty respectively, potentially joining projects by Boss Key Productions and however many mods of existing games there are out there. They’ll also join H1Z1, the game Brendan “PlayerUnknown” Greene consulted on before moving onto his own project.

If you haven’t heard of H1Z1, or you completely forgot about it, it’s hard to blame you. Since September, two games have dominated the conversation, turning the Daybreak Game Company title into something of a distant third-place competitor. But it predates both PUBG and current king Fortnite. It had a rocky Early Access launch in 2015. A year later it was announced the game would be split into two separate projects: Just Survive and the battle royale King of the Kill. That moniker was later dropped and now the mode is simply known as H1Z1.

After three years of Early Access, it officially launched on PC in February and went free-to-play — an arguably necessary move that pissed off some of its Steam buyers if reviews are to be believed. Next month, the game will make the jump to console with an open beta on the PlayStation 4.

Over this past weekend in Las Vegas, I got a look at the game as part of the H1Z1 Pro League kick-off. Tony Morton and Eric Correll from Daybreak were on hands to explain how the console version of the game will differ from its PC origins.

“We’re really excited. It’s a pure version of B-R [battle royale] on console,” Morton, Lead Systems Designer at Daybreak, explained to me. “It’s focused on movement and combat, getting in, getting down, getting around the map, picking up weapons and just focuses on conflict. With our heritage and history, we’re just big fans of PlayStation and Sony. It’s an awesome console with a great community and we thought it was the best way to make our entrance into the console scene.”

The PlayStation 4 port does away with many of the aspects of the PC version. Crafting has been removed completely. There is simpler loot and inventory management, a weapons wheel, and a revamped UI that is easier to read. How matches play out is also getting a work-over.The green gas that slowly encompasses the map and pushes players towards one another will spread at a faster rate as the developers push for a target round length of 15 minutes. 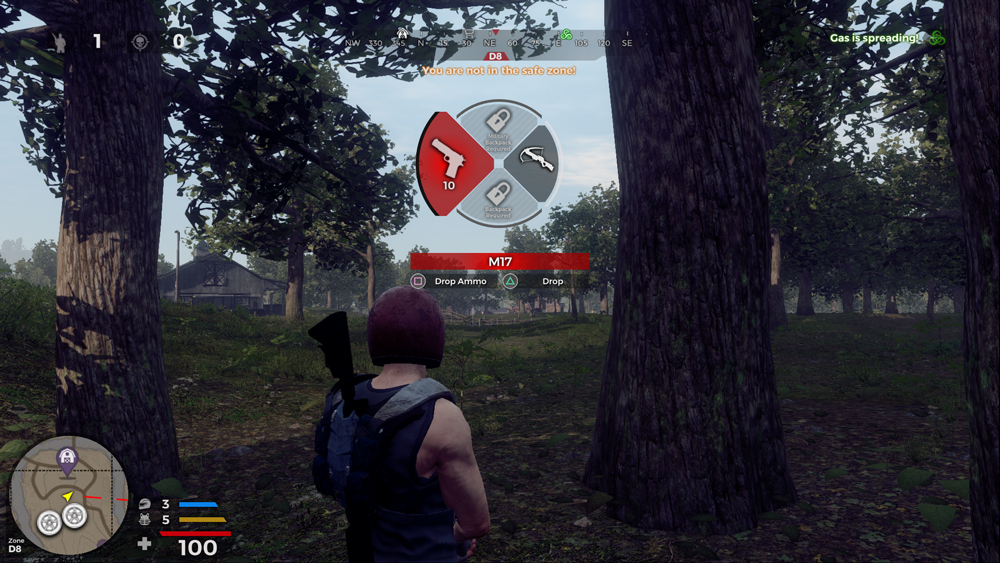 At launch, the game will also feature six new weapons and locked 60 frames per second on the PS4 Pro with minimum 45 fps on a standard PS4. Microtransactions will be limited to skins and other vanity purchases. Starting today, players can pre-order a $30 H1Z1 bundle that will net them unique cosmetic times and a dynamic theme. Future updates are planned for the game and Morton says community feedback can help shape its ongoing development.

“Daybreak has a history of supporting games for a long time. Look at EverQuest or PlanetSide 2. We are a games-as-a-service company, which means you ride that thing out for as long as you can. For H1Z1, on PC we’re still doing regular updates and on console, there will be regular updates. A lot of the update structures will come from the community. What do they want to see? We have Z1 [a new map] coming to PC in the near future and I’m sure that’s a piece of content we’re going to want to bring over to console as well.”

Auto Royale, an all-vehicles mode for the game that is currently in beta on PC, could also make its way to the system if there is demand. H1Z1 on PS4 will launch with solos, duos and teams of five as well as the lone Z2 map. It’s not much in terms of quantity, but Daybreak Games is hoping quality is enough to win people over. I cannot attest to the quality of the console version as it wasn’t available for demo during or after the presentation. What I can say is, based on the video we were shown of it captured on a PS4 Pro, it looks smooth, fast, and deadly. It also looks exactly like PlayerUnknown’s Battlegrounds. 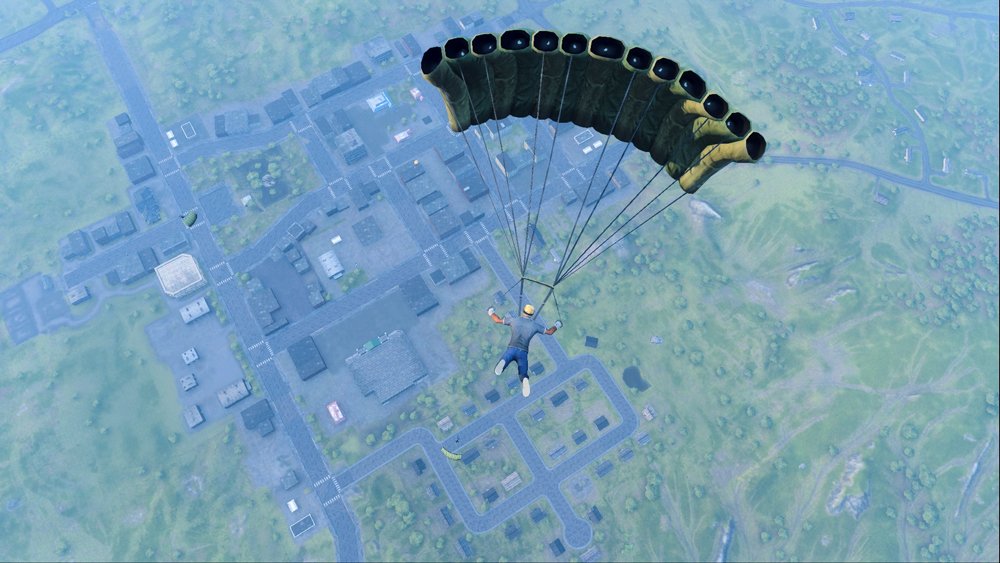 I’m not a big PC gamer and I cannot name a single mod I’ve installed in my life, so when PUBG was announced almost two years ago, I didn’t give a flying fuck. I thought it was another shooter with what has to be the American version of a crazy Japanese video game title. So I ignored it untildoing so became impossible. For several months it was arguably the biggest thing in gaming, neck-and-neck with the Switch in terms of media coverage. I’ve played dozens of hours of PUBG, have watched many hours more of the D-Team, and, gun pointed at my head, I don’t think I could look at video of that game running side-by-side with H1Z1 and tell you which is which.

I get it. H1Z1 technically came first, easily beating PUBG to Early Access. But just because it’s the first doesn’t mean people are going to recognize that. If you’ve never heard of the game and see avideo of it, you’ll probably think it’s Battlegrounds or at least a straight rip-off of it.

It reminds me a lot of John Carter. The original novel series, A Princess of Mars in particular, has had a great deal of influence in modern sci-fi. James Cameron’s Avatar sought influence from it as did the original Flash Gordon serials that would later become the backbone of the Star Wars universe. So many well-known properties ripped their material from Edgar Rice Burroughs that by the time A Princess of Mars received its own feature film adaptation, 2012’s John Carter, there was nothing left for it to dazzle audiences with because we’d already seen everything it had.

That’s the boat H1Z1 is in right now. Though it’s not the original battle royale, it’s certainly played its part in setting up the genre only to have its place overtaken by more popular titles. There wasn’t a single piece of footage shown to me over the weekend that sets it apart. Fortnite, PUBG, even the soulless monstrosity that is Radical Heights, are all more easily recognizable than it. And it’s only going to get more difficult as more titles with more name recognition enter the fray. H1Z1 is blazing a trail on PC as the first to have its own pro league, but on console, it’s betting on the “purity of play,” a term I heard often over the weekend, to wrangle players in. 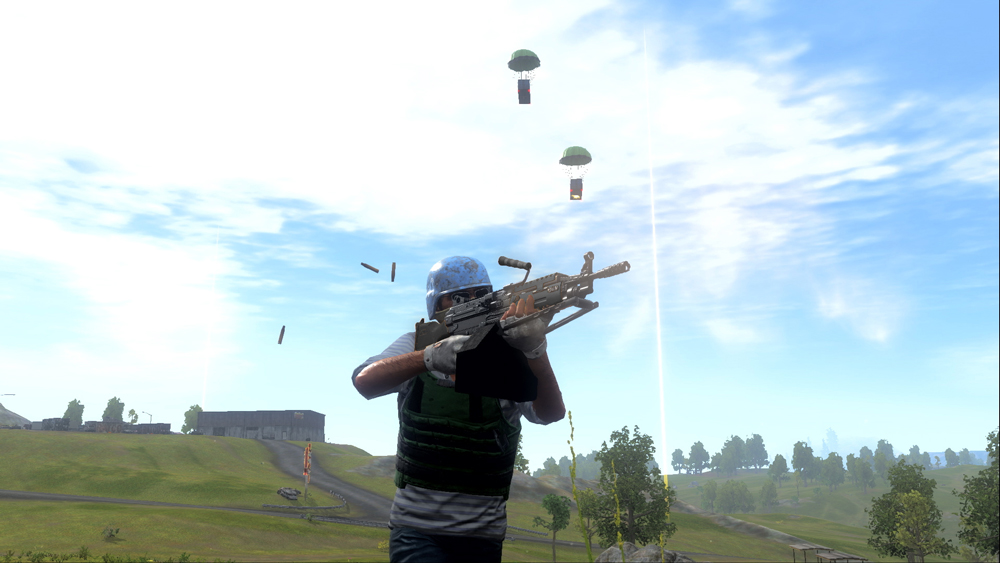 “If you just want to worry about getting around, getting guns and shooting people, and not anything else, H1Z1 is it, especially on the console,” Morton explained. “It literally is as pure as it can be. Grab a gun, shoot some people. It eliminates the barrier to entry and a lot of the confusion because of all the BR games it’s the most pure and, in a good way, simplistic. The pure adrenaline rush of me versus you, gun versus gun, and who wins at the end.”

I don’t know what the future holds for H1Z1, but if you’d like to get your hands on it early you can sign up now for the Closed Beta taking place later this month. As for any celebrities who want to break in on the ground floor of H1Z1 Twitch streaming a la Drake, Morton has an idea on who he’d like to see play the game.

“Elon Musk. He’s got to be one of the most relevant people out there and his thirst and hunger for not only knowledge but to do things better and his ability for awareness, I think if anything he would be insightful as hell if he came and gave us his thoughts on things. So yeah… him or Robert Downey Jr.”