Abandon your individuality in EA's The Urbz: Sims in the City

According to this kusoge, you must fit in at all cost.

In 2000, while humanity was crawling from the wreckage and trying to rebuild after the devastation of Y2K, The Sims exploded on the PC. It was an opportunity for people to look down upon their creations, trap them in the pool until they drown, and have absolutely useless children. It was massively popular, as you’d expect from a product that allows you to watch someone pee, and sold millions of copies.

In typical EA fashion, they immediately began to plot new ways to whore out their cash cow. So, they ported the game to consoles with fresh, 3D graphics and made even more money. Then they did it again with The Sims: Bustin’ Out, which I’m not going to make fun of because it was sort of awesome. Riding high from that, they decided that the franchise wasn’t vacuuming money out of people’s pockets fast enough, so they decided to spin the series off.

They chose to move the game from the weird Edward Scissorhands depiction of suburbia and into the urban jungle where everyone listens to the Black Eyed Peas and the partying never stops. The result was The Urbz: Sims in the City, and if this is the first time in years you’ve heard the title mentioned, I’m not surprised. 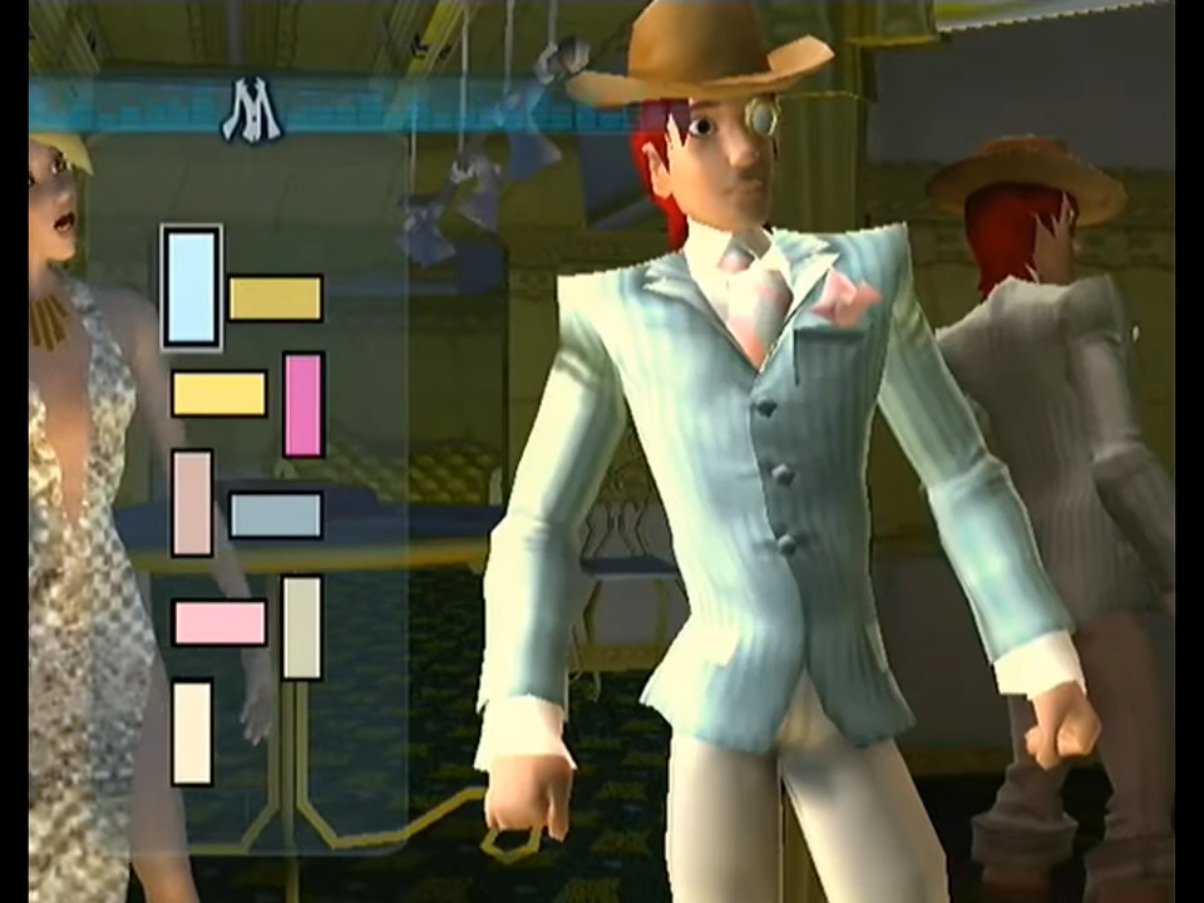 If you’re unfamiliar with The Sims, that’s weird, but okay. It’s essentially a virtual dollhouse. You build or buy homes for your hapless little people, drop them into it, then dictate their life until they get rich or you get bored.

Urbz is not that, for some reason. Boy howdy, it is definitely not about being the personal God of the whiniest people to ever inhabit a mansion. You’re given an apartment, but it’s largely vestigial. You spend all your time traveling to different neighborhoods, all of which have the amenities needed to keep your Sim’s stats topped, so you never need to go home. Then you unlock a pet and there’s even less reason to go back to your apartment because it pisses everywhere. There’s no room stat, so there’s no reason to clean up after it because your avatar is perfectly content living in a lake of urine. But, again, why slosh through an apartment full of your useless pet’s elimination when you can just sleep in someone else’s bed?

That’s the closest it really comes to being The Simsbecause the rest of the game is about being a poser. Apparently, in this city, the most important thing is to become popular because some guy named Darius told you to. To do this, you have to go and make friends with everyone, kind of like the most boring part of The Sims. Except it tells you what social interactions are going to succeed 100% of the time, so you just spam them until someone likes you. So, actually more boring than the most boring part of The Sims. That’s impressive. 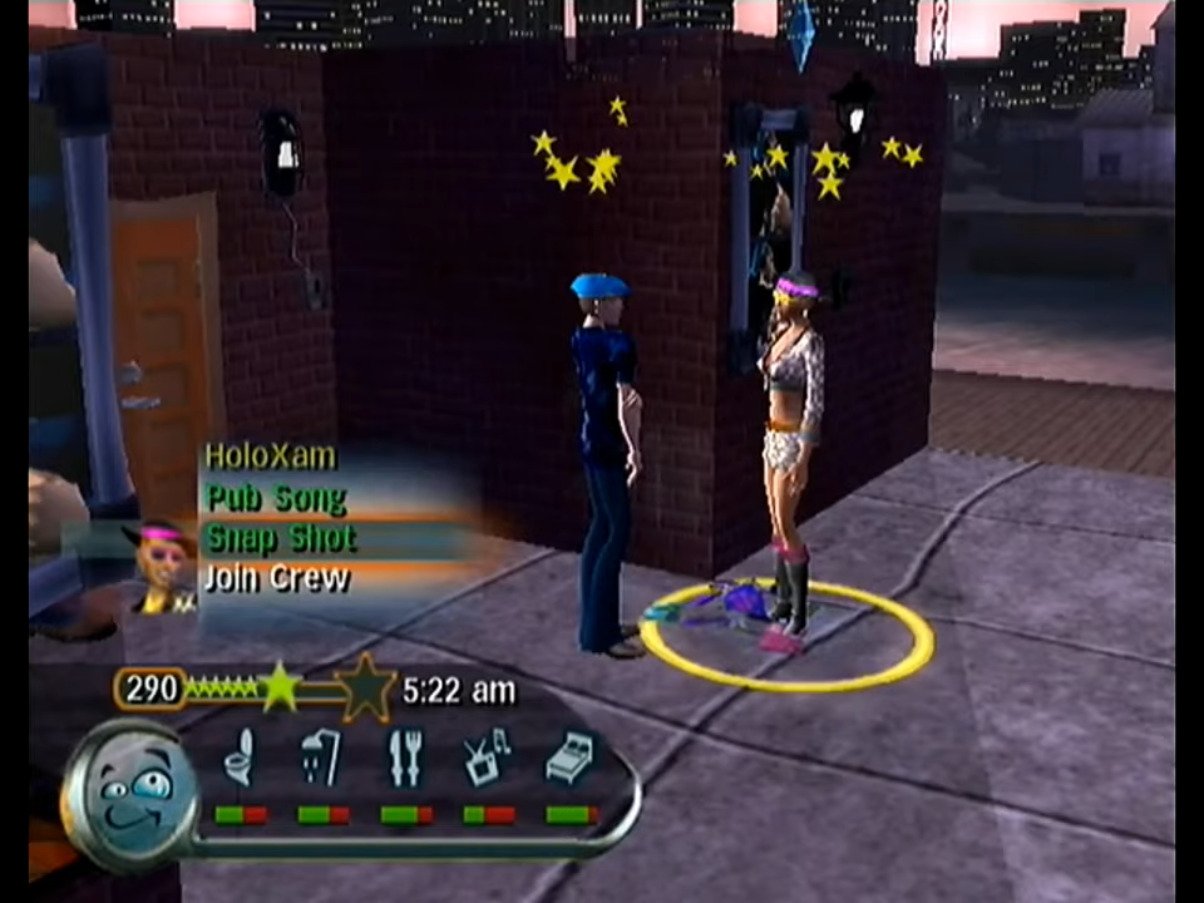 You get to create your avatar, but don’t spend too long in the character creator because it’s just going to end up looking the same as every other character in a particular neighborhood. Yeah, to make friends you have to dress like them. You have to act like them. Do the same skateboard tricks everyone else is doing. Only once you’re popular enough can you get into the VIP area to party with the rest of the beautiful people and dance like you’re part of some sort of cult ritual.

Eventually, the neighborhood villain shows up and starts lighting people on fire. I don’t think they’re supposed to do that, but one area had a taunt where they throw firecrackers at the feet of another Sim, and that Sim just went up in an inferno. It might have just been emergent gameplay, but I can’t help but feel The Urbz is threatening me. If I go missing, check the disc case, you might find my burnt teeth in there. 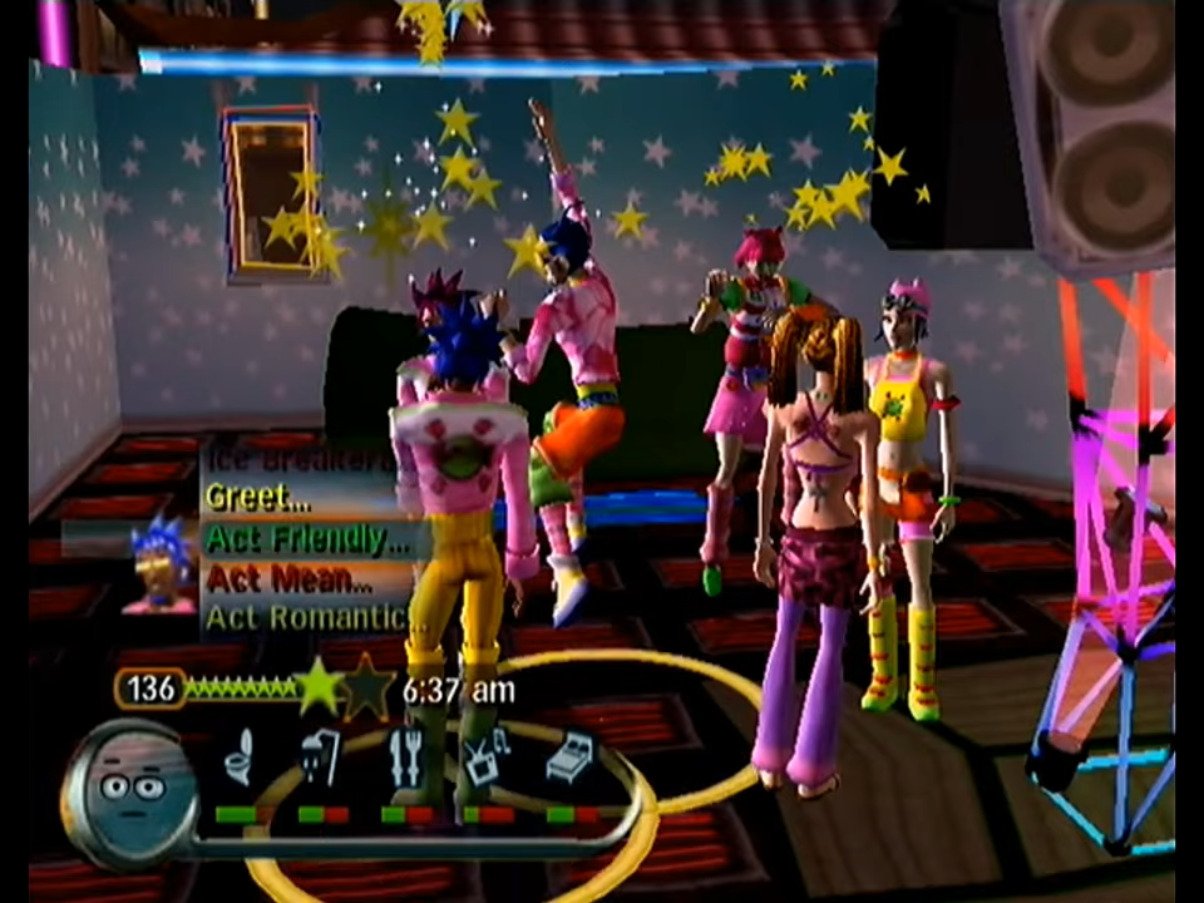 The Urbz isn’t fun to play to begin with, but then there are problems layered over top of it. The pathfinding, which has always been a little sketchy for the series, is at its worse here. In particular, whenever the VIP club opens in the evening, everyone attempts to pile in at once. And then, after they get through the door, they just start dancing, blocking everyone waiting from getting in. It makes you wish you could put a rug and a fireplace in the club and just burn all the gyrating doppelgangers in one neon blaze. Thin out the herd. They all look the same; they’re practically born expendable.

The graphics also look horrible. I don’t know what it is about console Sims titles of that era, but they always had this weird haze to them. But never mind that, they changed the art style, and it looks rough. I guess you could argue it has more personality to it, but that kind of clashes with the game’s complete absence of individuality.

It’s not all bad ideas, however. Skill-building and jobs are now done with mini-games rather than watching a progress bar fill, and…that’s all I can think of. The Black Eyed Peas are in it if you like their music circa 2004! I don’t, but you might! 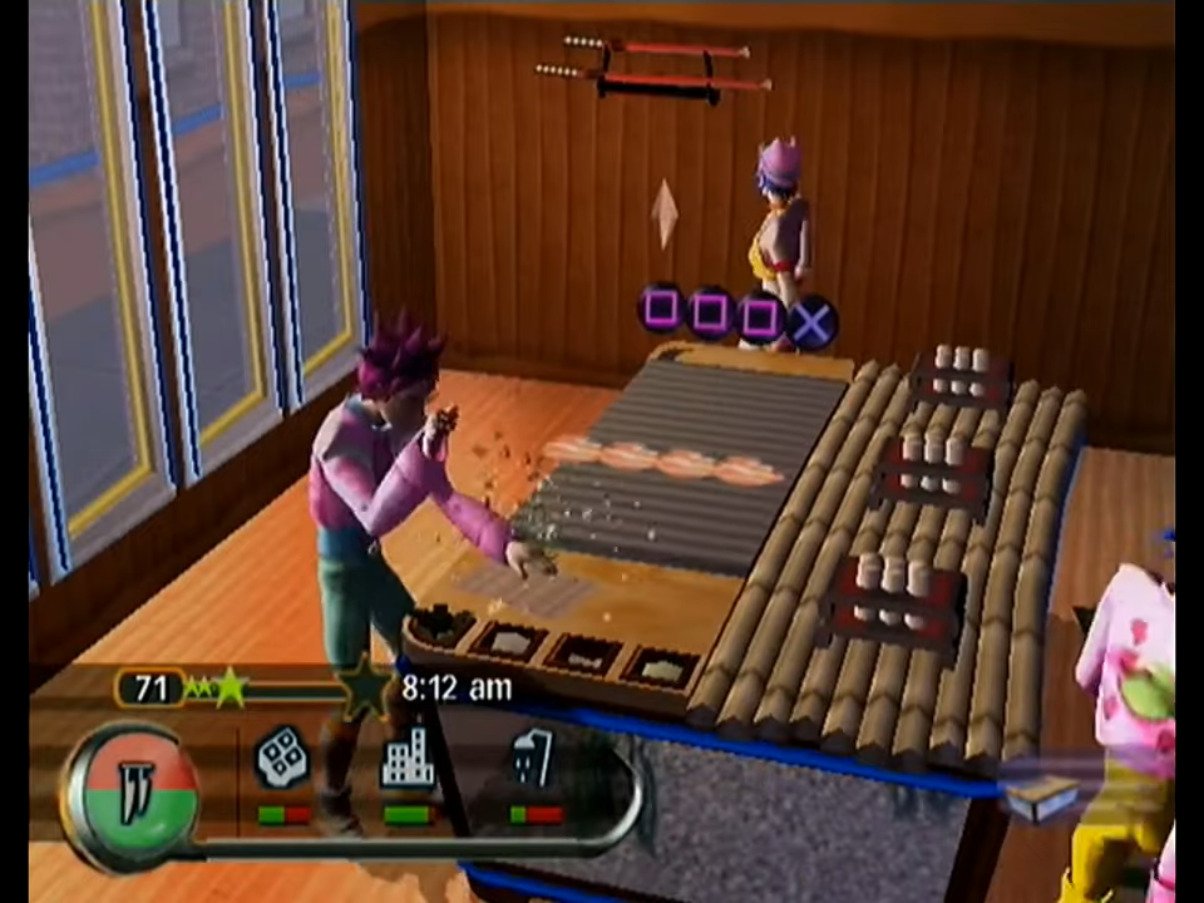 Mostly, I just find the game bordering on repugnant. From toes to tits, it’s all about conformity. It runs completely against the philosophy of the series at large, which was mostly about putting together unique characters or just living your ideal life. In The Sims 4, I had a lady who poisoned her baby’s daddy with poorly cooked fugu fish. In The Urbz, I showed off my muscles repeatedly until a person liked me, and then I did it again to the next nearest victim.

I don’t know who this is supposed to appeal to. Maybe I’m the weird one, and it’s normal to just blend into a scene and make as many friends as possible at the expense of your individuality. And what happens when someone you befriend finds out that you’re not a punk? That you just were wearing ripped jeans because you thought that was the only way people would like you? I’m pretty sure they’d throw firecrackers at your feet until you combust, you faker.

Honestly, I’ve never been part of the party scene, so how would I know if this is normal? While everyone else was at the bar, I was killing my eyes in front of a CRT playing Bully and Chibi-Robo. If what The Urbz depicts is normal for the party crowd, I don’t want any part of it. Seriously, I thought those people were just having more sex than I was, not lighting each other on fire and doing skateboard tricks. 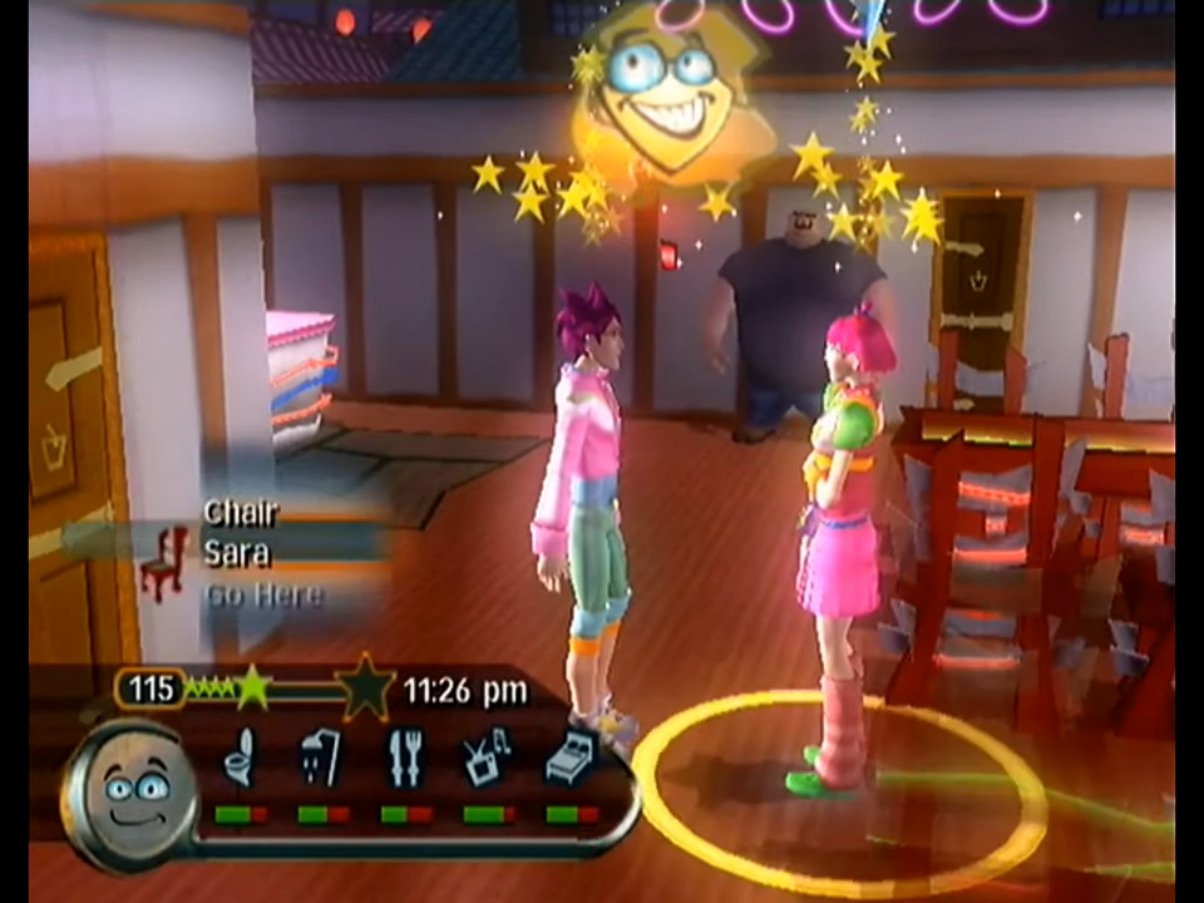 The Urbz wasn’t the hit that EA was hoping for. It immediately failed to spawn another series to go alongside their flagship, which didn’t stop them from trying again with MySims and The Sims Medieval. There were plans for a PC port, a PSP version, and even a sequel, but that all hit the skids when The Urbz was met with a collective pbbt. The Urbz 2 was eventually repackaged into the console version of The Sims 2, which had so little in common with the PC sequel that it’s offensive in its own way.

I do want to point out that the console version of The Urbz is an entirely different beast than the one that came out on handhelds around the same time. That version is weirdly compelling and full of creativity that was completely lacking in the console version. The Urbz on console is just a vacuum where fun should be. I strongly think that a more urban-based Sims concept could have worked, but not like this. This is the pitz.