Army Men: Major Malfunction is like having an apology letter tied to a brick thrown through your window

This kusoge’s disk will react real well in the microwave

I’m the world’s foremost expert on the Army Men series of games, and while I can see you raising a skeptical eyebrow, I have to ask: do you really want to challenge that claim? The series is something of a guilty pleasure of mine. A majority of it is mediocre, some of it is decent, but a lot of it is bad. The experience is a lot like dumpster diving; every once in a while, you might find a discarded treasure, but you’re mostly just going to wind up with tetanus and a foul smell.

It’s an interesting part of gaming history because a massive deluge of the titles hit between 1998 and 2002 before it coughed out the disturbingly depressing eulogy that is Army Men: Sarge’s War shortly after 3DO went bankrupt. The rights were bought up by Global Star Software, a subsidiary of 2K. They tried rebooting the series twice before just giving up and leaving it to be forgotten.

Army Men: Major Malfunction is the first such effort. Developed by Team 17, it at least has some pedigree, but sometimes pedigree comes with severe medical complications and genetic mutations. 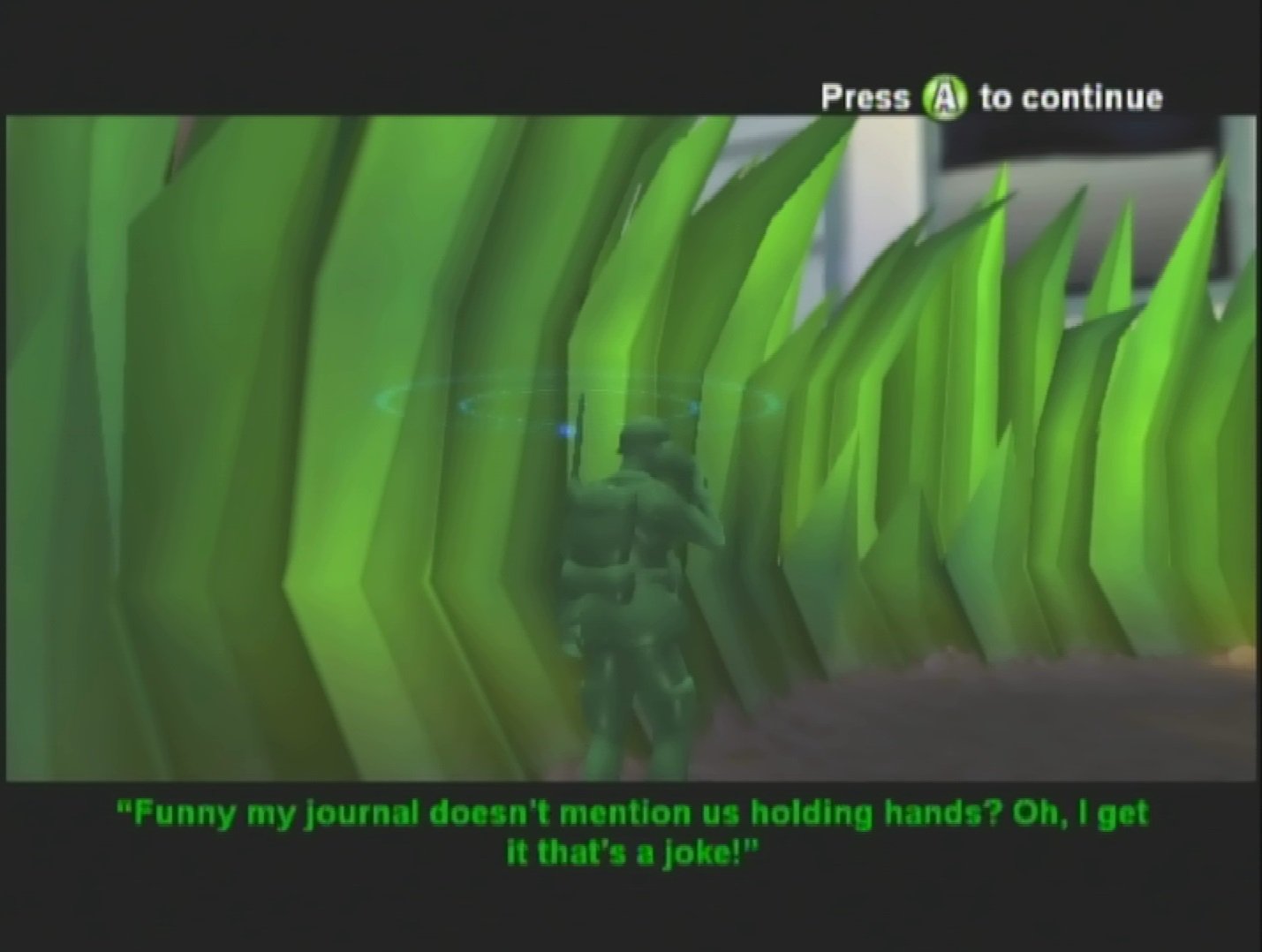 The Army Men series has been traditionally about an eternal race war between green and tan toy soldiers. Major Malfunction wipes the slate clean, then it breaks that slate over its knee and gets a different slate. Not only does it can the old principal antagonists, but it also nukes the old protagonist. The opening cutscene shows a green toy soldier wearing sergeant stripes getting microwaved in an obviously dark implication that they just killed off series mainstay, Sarge.

Try something for me: put a toy soldier in the microwave and try roasting it. I’m not going to try and explain how a microwave works, but my point is that plastic doesn’t react. It’s why your Tupperware doesn’t meld with your leftover chow mein.

Anyway, that’s all beside the point. What Team 17 is trying to say is, “we made the bad game go away. It’s safe to come out,” and, gosh, do I wish I had their optimism. 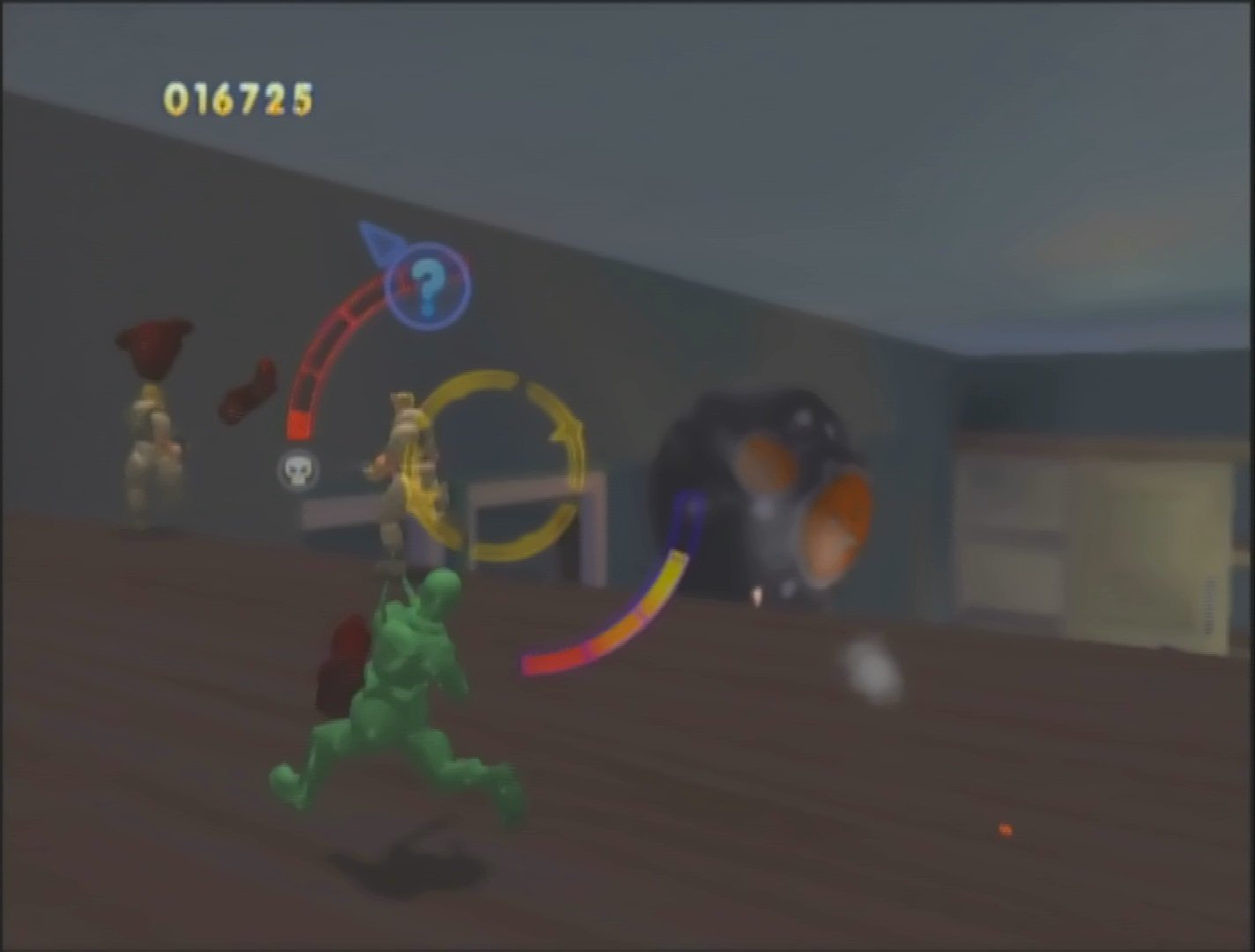 At first glimpse, Major Malfunction has a lot going for it. You play as Private Anderson, a green soldier who is tasked with taking down the eponymous Major Malfunction and his army of toys. The graphics are bright and colorful, and honestly, I find them to still be pleasing to look at for an Xbox title. It has a very clean and cartoony look to it, while its environments are expansive and detailed. It’s just unfortunate that it seems like the art team are the only ones who had fun with the game.

It’s your typical 3rd person shooter but made as vexing as possible. The 3D entries of the series historically used a hyper-sensitive auto-aim to compensate for its inaccuracies, and that worked for the most part. Sometimes. Major Malfunction uses a lock-on targeting system, which sounds like an improvement, but is somehow less reliable. The range at which it locks on is bewilderingly short, and it never seems to prioritize the more pressing threat. You can be targeted by a handful of bazooka-wielding foes on a distant platform, and you’re completely helpless. There’s no manual aiming for some reason, so have fun eating munitions fed to you by enemies gifted with better eyesight. 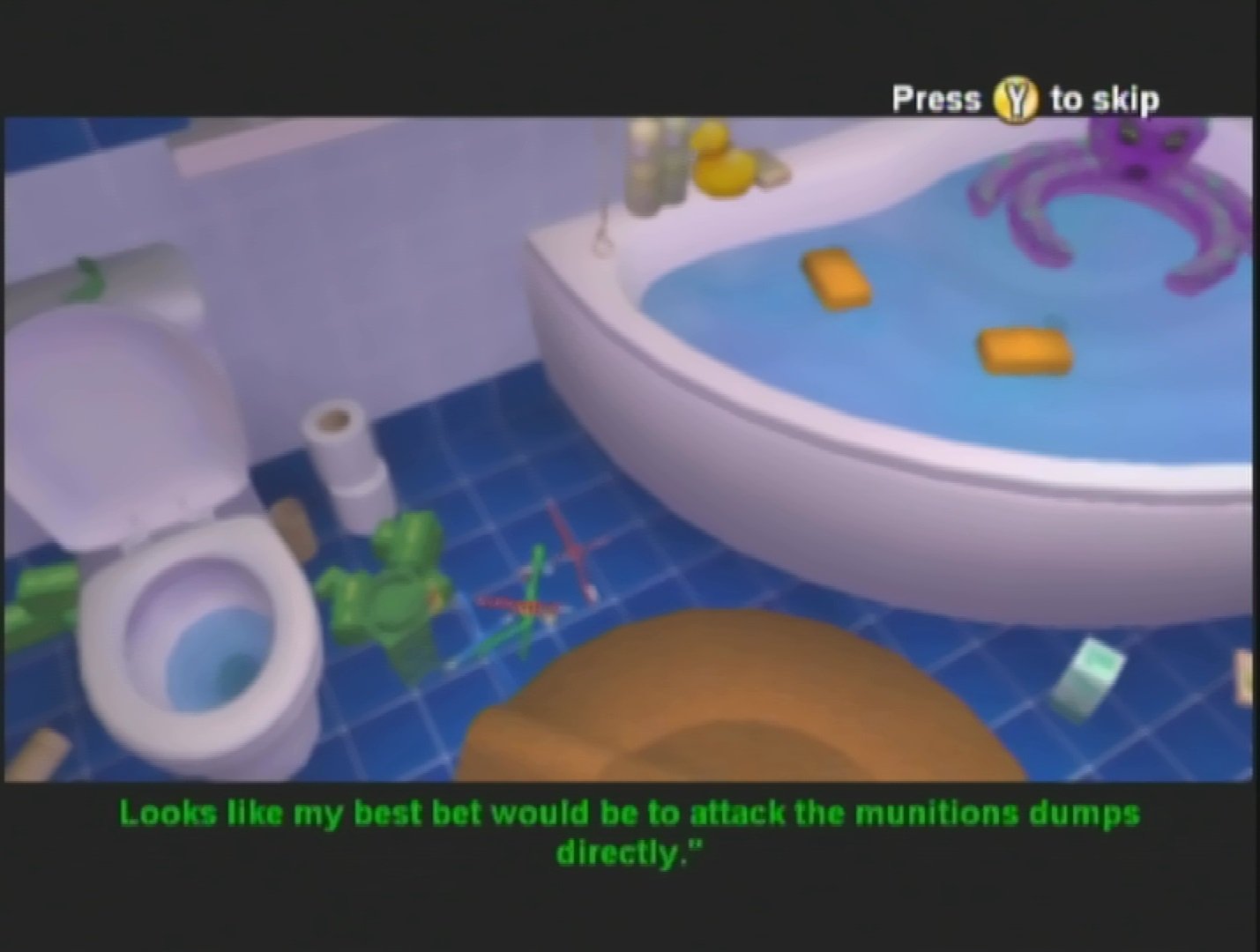 Even when the lock-on does cooperate, combat is about as stimulating as an afternoon nap. I don’t have a problem with circle-strafing, but both the enemies and Anderson don’t seem all that committed to their own survival. Guns are slow to fire and lack impact, while everyone moves with the urgency of the tides. You get a collection of weapons throughout the game, and they mostly have their uses. However, never try pulling out a new one during combat since Anderson has to first dig past all the gum wrappers and receipts that have piled up in his purse before he can find anything.

The gameplay isn’t even my biggest complaint about the game, instead, it’s one that I didn’t even know could be a problem: establishing shots.

Major Malfunction is lousy with establishing shots where it takes control of the camera and slowly scrolls over to the next point of interest. It doesn’t just do this to introduce the level, oh no, every time you complete an objective or defeat a group of enemies, it yanks control of the camera from you so it can slowly hover over to the next group.

I’d say it doesn’t have any respect for the player, but I feel it’s lacking self-respect a bit more. Its absolute obsession with giving you the grand tour every time you take three steps seems more like an attempt to get past its crappy level design. I know I said that the environments look nice, and I stand by that, but when it comes to actually playing with them, the designers seemed to half-ass it. They lack visual cues, natural barriers, or ideal paths to lead the player along, it just arbitrarily plops its objectives wherever and then shows it to you. Slowly. So you won’t get lost. 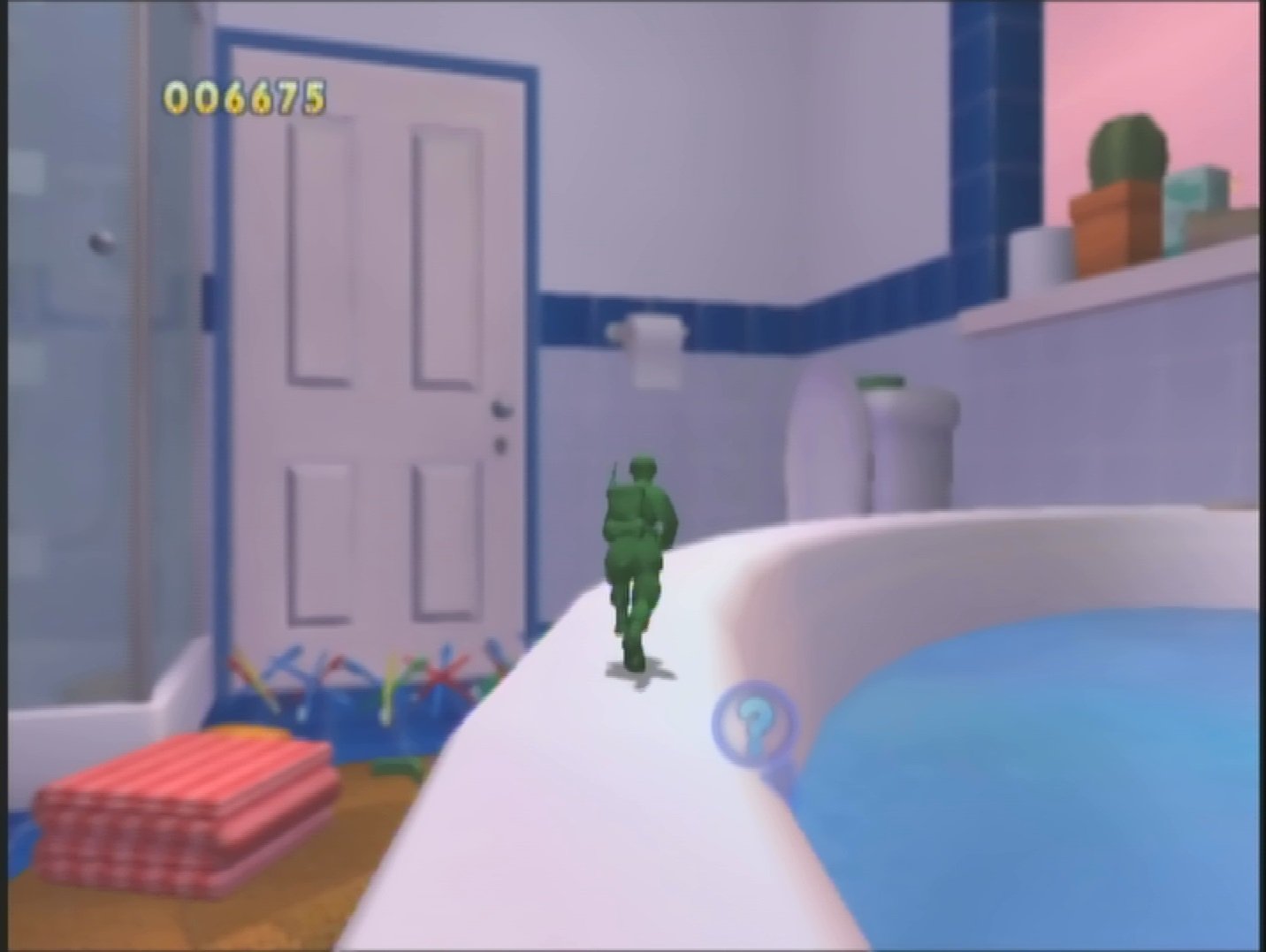 It may seem weird to complain about the game’s method of directing players as the crux of this article, but it truly is offensively frustrating. It is, however, not the game’s only problem. It’s just the one that drilled into my head and laid its eggs.

The camera, for example, breaks frequently and is unable to fix itself. On the whole, the camera is unreliable and annoying, but I’ve rarely encountered one that just gives up when the going gets tough.

The story is just bizarre. It does that thing where it shows glimpses of the present interspersed with gameplay based around how we go there, but the story isn’t anywhere near deep enough to really pull it off. There are a bunch of characters introduced that I had no hope of keeping straight because they usually speak from offscreen. It really can’t get over its obsession with killing previous series’ protagonists either since there’s a really confusing bit of dialogue involving Sarge, the protagonist from the PC Army Men games, and Sargeant Hawk from the Sarge’s Heroes subseries; a distinction no one cares about.

I get it, Major Malfunction, you thought the previous games were so bad that they need to be erased. It’s just funny that you think that you’re somehow better. 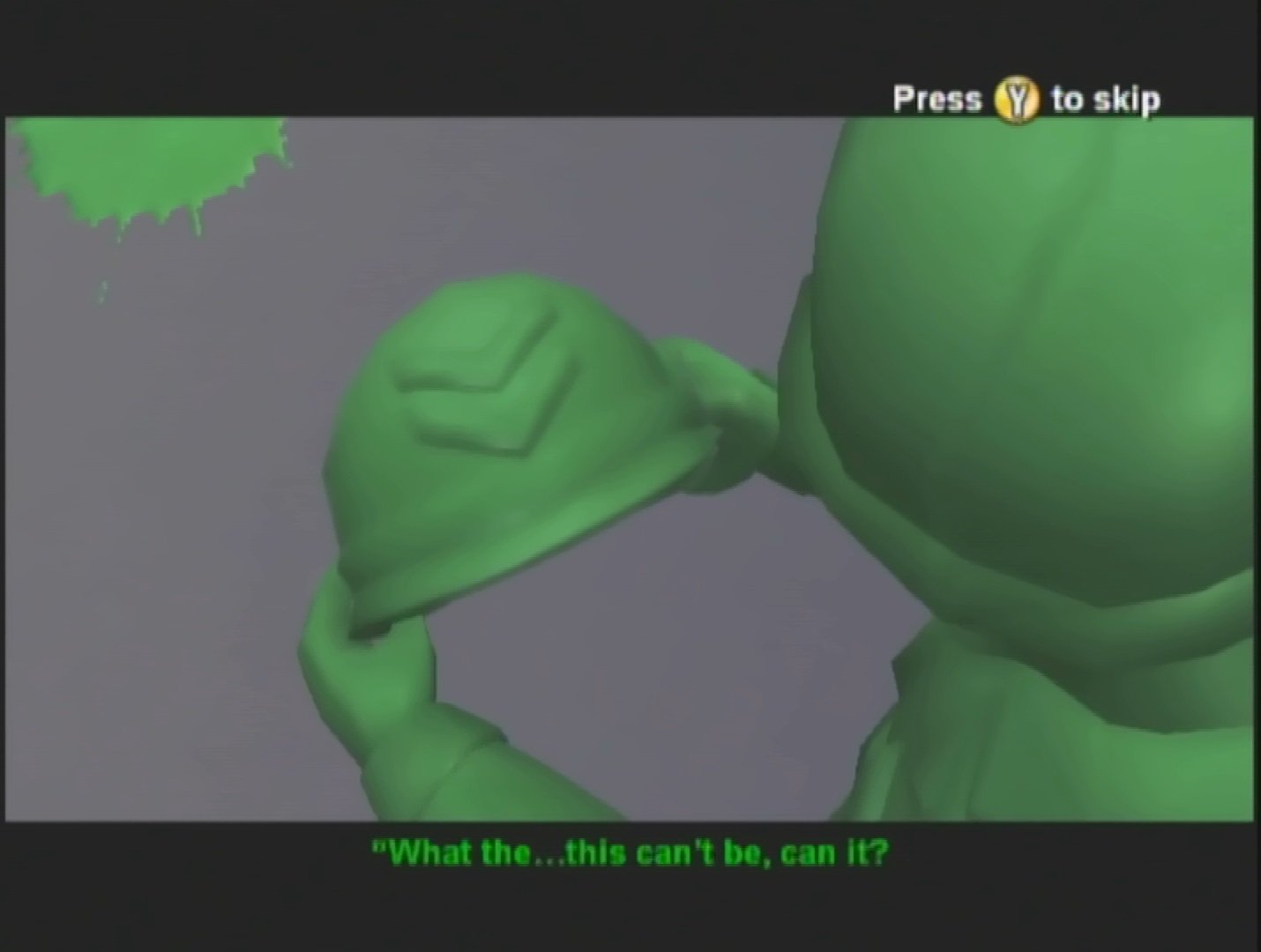 I just find it darkly funny that I’ve played most of the Army Men series, a franchise that is infested with awful titles, and the one I chose first for these articles is the one that was presented like an apology. Just to see so much undeserved confidence depicted in a horrible game tickles the part of my brain that I like to pretend isn’t there.

On the other hand, I wish it was good. The Army Men series often presented a lot of good ideas that just never reached their potential. I’ll still extol the virtues of Sarge’s Heroes’ level design and the art style of Operation Green, even if they’re mired in other problems. Indeed, Major Malfunction isn’t a total wash, but it takes more than a cheerful and clean art style to make a decent game. Not when everything else is about as much fun as organizing someone else’s collection of toenail clippings.