Details on ACIV’s story and setting

Your journey as an Assassin’s Creed player has been a vast and varied one so far. Time travel has taken us through some of the most exciting times in human history. But, at first glance, the setting for the franchise’s next stop sounds a bit banal in comparison to previous games. A bunch of pirates in the Caribbean? We’ve already seen that movie. Four times.

From what we’ve seen of the game, I’ll tell you that this isn’t some cheesy kids’ flick. Ubisoft have dug deep into the treasure chest that is the history of the golden age of piracy. They have used what they’ve found to build an original and highly-detailed world that we can expect to get lost in once more. It’s less about eye patches and peg legs and more about the realities of being a pirate in the late 1600s.

It’s way cooler than it sounds at first. 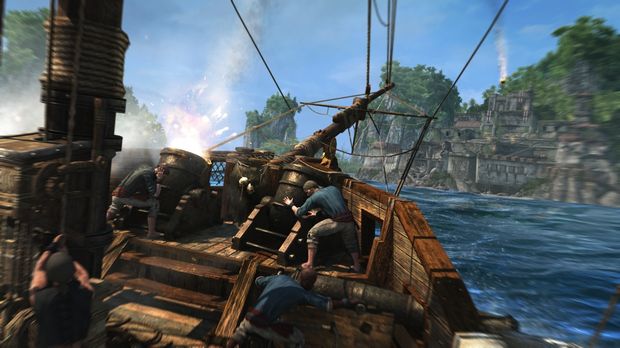 We got a full lay of the land (sea?) from three people that would know best.Darby McDevitt, the writer of Assassin’s Creed IV, talked about just how much research and detail went into the game’s story and setting. ActorMatt Ryan, the talent behind main characterEdward Kenway, gave us color on what went into the role. Finally, weapons expert and historianMike Loades told us just how brutal life was as a pirate, with full details on how fights went down.

Assassin’s Creed IV: Black Flag is set in the beginning of the 18th century, and it follows Edward Kenway from his work in the Royal Navy to his transition into piracy. This happens just as the Golden Age of Pirates kicks off. And as always, a war between the Assassins and Templars seems to be tied to the conflict.

My key takeaway from this meeting is that McDevitt’s passion for this period of history is really going to make Assassin’s Creed IV easy to get caught up in. He told us that after his own half-year of research, he traveled to the area where this history took place, in the West Indies, near Costa Rica. Their work goes way beyond taking pictures and going to museums. All aspects of life, from sugar trade to slavery to stealing everything under the sun, was worked in. He left no stone unturned. 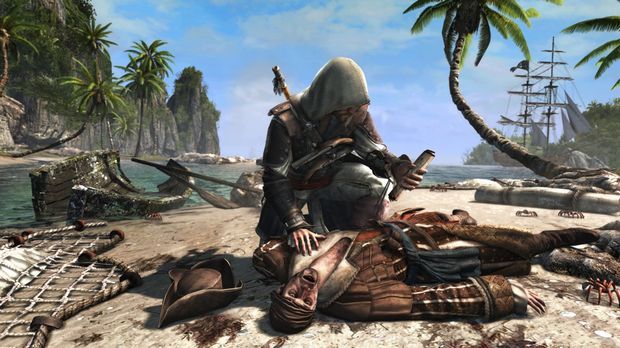 Everything from the dress to the talk of the time has been thoroughly researched and carefully implemented. Characters have their proper accents, with voicing coming from actors from their proper locales. Forget “shiver me timbers” — characters say fun phrases like “dash my buttons” and “bag of shite” in ACIV. And they sing! McDevitt explained that there are some 70 authentic shanties to be heard in this game, all faithfully recreated by the game’s composer. What’s fun is that players can collect song sheets through play to add to the game’s shanty playlist.

Authenticity was important enough for Ubisoft to send sound teams to create impulse responses of real-world locales in the area, letting them effectively sample and reuse the characteristics of a building’s reverberations in the game. This means that the echoes you hear from voices and sound effects will sound just as they would in the real-world version of the game’s locations. These people are crazy.

We learned that in the pirate world, many of the pirate stereotypes we know from television and moves did not exist. For example, pirate ships weren’t these grand, oversized vessels. Real pirates sought out small, agile ships so that they could make their getaway easy. They rarely went for the big haul, instead going for the easiest pickings possible.

Also, there were female pirates. Not many, and they were considered bad luck, but they existed, and it sounds like we’ll encounter some in ACIV. 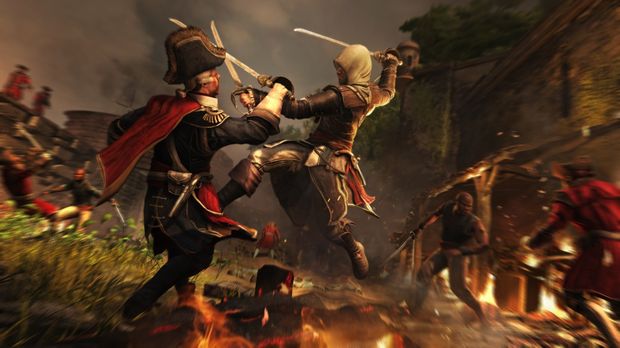 Slavery was also a reality in this time. Assassin’s Creed IV will feature slavery, though McDevitt says that they’ve chosen not to focus on it. In this age, slaves sometimes escaped the plantations and joined pirate crews but weren’t given weapons. We were told that no intense scenes of slavery were created for ACIV.Instead, slavery plays out in the background as a fact of life in the time, and not as an attempt to draw sympathy.

Main character Edward has relationships with slaves in the game. Pirates have different ideologies, and Edward has his own philosophy on the topic, so both friendships and enemies are created. The story explores this — some characters may not like his feelings on slavery.

Historian Mike Loades is just as passionate as McDevitt is about the pirate age, though his focus lies more with weaponry. He worked as a consultant for Ubisoft, helping to guide their work onACIV‘s weapons. He explained that pirates would board ships carrying as much weaponry as their bodies and clothing could handle, so depictions of television pirates carrying both swords and guns are not that far off. He said that it often went further, with jackets stuffed full of single-shot pistols, grenades, knives and more, all supplementing their cutlass swords. 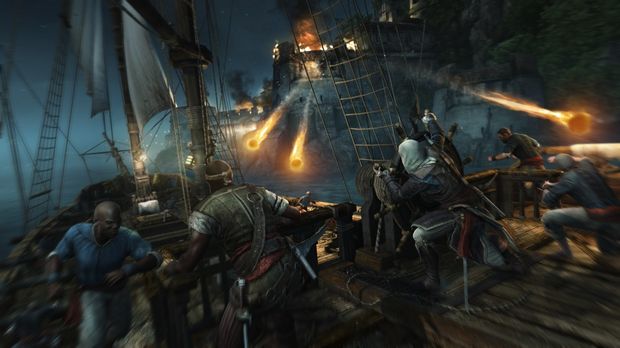 Loades credits Ubisoft with going farther than Hollywood has as far as pirate authenticity is concerned. He admits that ACIV is a fantasy game, but says that it’s well anchored in real history.

One aspect of pirate life that is often depicted in movies and actually is real is drunkenness. Both Loades and McDevitt explain that water was in limited supply on these boats, though rum was always at the ready. Pirates had to drink rum or grog, a ration of water mixed with rum. As they explained it, pirates lived their entire lives drunk.

Even with all of this authenticity, it’s still Assassin’s Creed, which means that there’s a fair bit of fantasy mixed in. This is not the History Channel, after all. And how boring would it be to sit on a pirate ship for months on end? In fact, ‘fast travel’ on boats is a feature players will appreciate, getting them back into the action quickly. Just like a movie, a quick sailing scene can take you to the next locale. 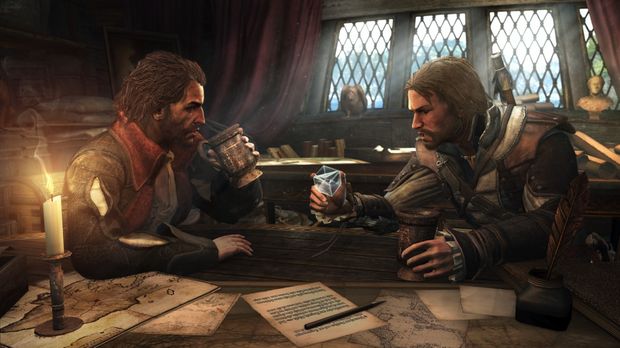 Details were light on this side of things, but we did learn some new gameplay details from our discussion, including some changes to stealth play. You’re on your own as Edward, meaning that can no longer call in the guild for help. You’ll just have to be smarter. Or, you could use the new blowpipe to take enemies out from a distance. It’s non-lethal as Ubisoft felt that insta-kills like this would break level design. You can now whistle anywhere to distract and later take out enemies via stealth.

We saw a live demo where a single player would have to sneak onto a plantation to take out 10 or more soldiers by himself. The usual tricks worked fine, like hiding in haystacks for stealth takeouts, but it seemed that the blowpipe was a big help in this situation. It looked a lot like the Assassin’s Creed we know, but a bit more detailed and fluid. I’m guessing we were watching next-gen console play.

The setup we heard from this meeting for Assassin’s Creed IV story alone is enough for me to be excited. Factor in the new gameplay in an open world, the naval battles, new multiplayer modes (more on this later), and the next-generation visuals, and you have a game that is sailing toward the top of my most-anticipated list.