The Good, The Bad, and The Tomb of Horrors

If you like spaghetti westerns (and you should), take a look at Bandits and Bounties. It’s a top-down action RPG that combines fast-paced arcadestyle action with the bleak Western setting we all know and love. The game is currently looking for funding on Kickstarter, with a funding goal of $15,000.

At first glance, Bandits and Bounties seems like Hotline Miami but with 1000% more saloons. There’s certainly truth in that assumption, but the game skews more Dungeons and Dragonsthan anything else. The game’s character creator goes beyond skin-deep forehead shaders, instead giving players a wealth of stats to min-max. And I’m not exaggerating when I say “wealth.” Get a look at this stuff. “Investigate: 0.8?”

There will also supposedly be a variety of ways to handle each combat encounter, including dialogue trees. According to the Kickstarter, “The dialogue system in this game more closely resembles the diplomacy system from a strategy game. You can negotiate, threaten, and ally with characters in the game. Much of the dialogue also happens in real-time, so if the conversation starts going sour, drawing your gun or throwing a punch is an option.”

I love that kind of stuff: telling me I can end fights by talking my way out of them is basically my Manchurian Candidate code phrase. If you found Bandits and Bounties as interesting as I did, you should kick a few dollars their way or give them a thumbs up on Greenlight. Do whatever, just so we can all live the Wild West fantasy I’ve always dreamed of: all the moral ambiguity, none of the dysentery! 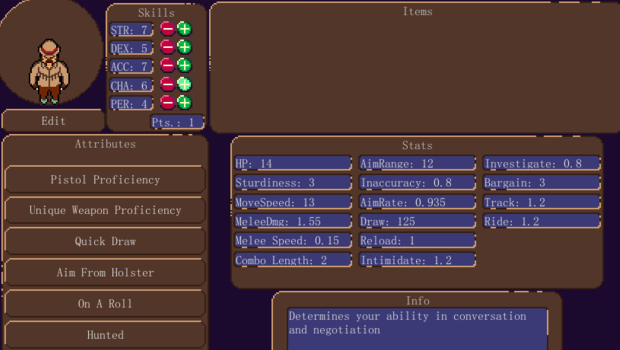