When Battleborn was first announced, there were certain trigger words my mind immediately connected before I had read a single word about the game. “Gearbox, shooter, color. Oh, I wonder what the loot drop rate is like,” I said to myself. Then all the MOBA comparisons started, and I didn’t know what to make of the game.

After roughly two hours worth of a hands-off presentation, it’s clear that Gearbox is back to their genre-blending ways. Whether lightning can really strike twice remains to be seen, but I’m intrigued so far. 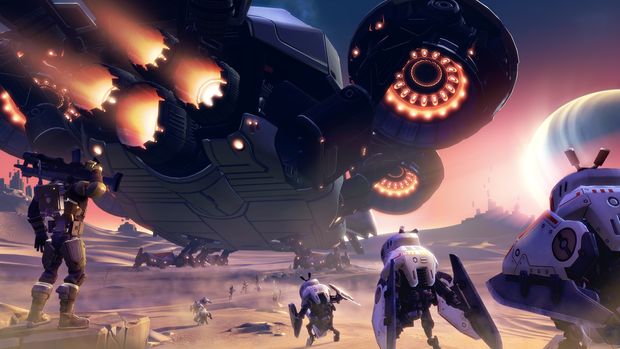 Battleborn takes place at the end of the universe, at a time when all but one star, Solus, has died out. All of the space-faring races of that time have descended on the last life-sustaining solar system, creating conflict as each faction fights for territory and resources. Times get worse for these desperate races as the Verelsy, beings from another universe who are causing all the stars to go dark, show up to finish what they started. Enter the Battleborn, a coalition of the remaining surviving races set on driving back the interdimensional invaders.

It’s a dramatic set up, to be sure, but Battleborn definitely does not carry a serious tone.Despite the end-of-days premise, there are constant little interactions that reinforce the game’s humorous slant.Characters like the soldier Oscar Mike shout battle dialogue like, “Be advised, this place creeps the hell out of me” or “Hippie down!” In one mission, an NPC character will mumble something about hacking an encrypting computer, while she is actually just punching around some unlucky captured enemy.

There has been a lot of talk about Battleborn being a pseudo-MOBA, so let’s set the record straight. Battleborn is a first-person shooter. It does carry influences from MOBAs, but the moment to moment combat is largely first-person gunplay. Every time you play a competitive match or a cooperative mission, you will grow from a base level to max level within that game, with each game estimated at about thirty minutes.

The multiplayer Incursion mode is where Battleborn‘s MOBA sensibilities shine most. In this five-on-five mode, two teams fight to conquer different objectives across the map, working through enemy grunts and opposing players as they try to make their way into their base. Again, all of this is happening in first-person combat, so you probably won’t be directly translating your League of Legends strategies. 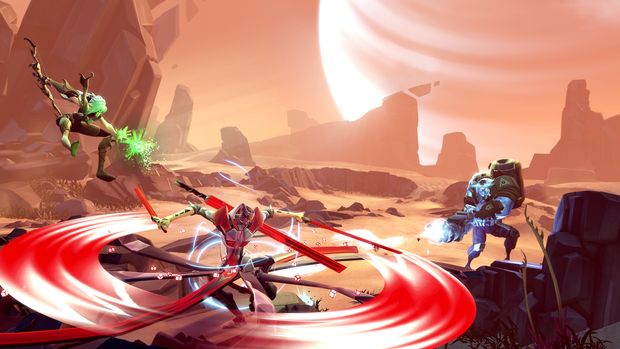 Battleborn also brings a considerably large roster for a cooperative shooter. Each player character comes from one ofBattleborn’s five playable factions. The Jennerit are a vampire-looking race, coming from a culture that respects power over all else. The katana-wielding Rath was the representative in our demo, looking like a cross between a vampire and a samurai. The Peacekeepers are Battleborn’s riff on the standard soldier class, home to such colorful characters as the hulking, chain gun-wielding Montana, and the soldier Oscar Mike.

Rogues are the unaffiliated free people of Solus. They are less structured than others, but every bit as vicious. The Eldrid are basically space elves, revering the natural order of the cosmos. As studio writer Aaron Linde puts it, “They respect nature but nature doesn’t have to mean life. They’re not the tree-hugging hippies you might think.” The Eldrid also deliver a distinctive purpose in combat, being the main faction for magic-based combat. Finally, we have the robotic LLC, an aristocratic group of war profiteers. Think of them as the 0.001 percent. They want to arm everyone in this conflict, so long as they make a nice profit. The longer the war runs on the longer they can feed their materialistic needs.

Each character comes with their own skill sets too, though these are not the branching skill trees of Borderlands. Skill upgrades in Battleborn work down a single path, each stop asking you to choose between one upgrade or the other. Do you want a red dot sight for close-range engagements, or a scope for long-range fights? Maybe you want extra damage resistance or an increase to damage dealt. Beyond that there are mutations on each of the augments, further branching off how each character plays, although that was not big part of our demo. Between all the different characters, upgrades, and mutation options, Gearbox is touting around a million possible builds. It seems the studio’s affinity for large numbers remains intact. 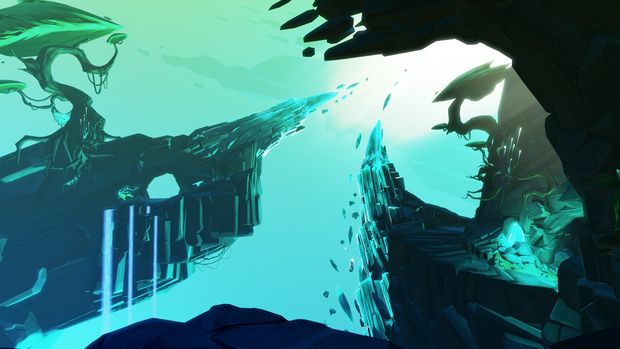 Past the upgrades, each character quickly unlocks unique abilities at level 7. For example, the peacekeeper Montana gains the ability to grow a metal skin coating, playing further into his heavy/tank role. Oscar Mike has his airstrike, and the living kung-fu fungus Miko can poison enemies. You will probably want to find a solid balance when running with your team too, as Battleborn has no second wind or revive mechanic.

At this point I honestly don’t know where I stand with Battleborn. Admittedly, I’m not much of a MOBA player, so there could be some deeper intricacies to the genre fusion that have gone over my head. That said, seeing the game in action has left me hungry to know more, but mostly, I want to get some hands-on time with Battleborn. Gearbox does appear to be on to something here. Whether that something is going to be great, I just can’t seem to tell yet.