I don’t even know

I played Betrayertoday, and I have no idea what it’s about. Not because of any sort of inattentiveness on my part, but because the ex-Monolith developers don’t want me to know what it’s about. That’s kind of the intrigue behind Blackpowder Games’ first title — trying to figure out exactly what the hell’s happening.

The first-person perspective game starts on the shores amidst the aftermath of a shipwreck. Immediately, Betrayer‘smost defining characteristic hits you — the monochromatic visual scheme mixed with deep hues of red. It’s reminiscent of Bloodforgein this sense, except it emphasizes things of importance instead of ultraviolence. Chests, enemies, and items that can be interacted with are highlighted, making them stick out across the desolate but vegetated environment.

From there, you get to figure out where to go. There’s no goal in mind, no waypoint marked, nothing but sheer curiosity pushing you forward. As you wander into a deserted fort, you get the feeling that you’re a part of something bigger. A ringing of a mysterious bell and a conversation with a ghost confirm that feeling. After departing the fort, Betrayershows its true colors. 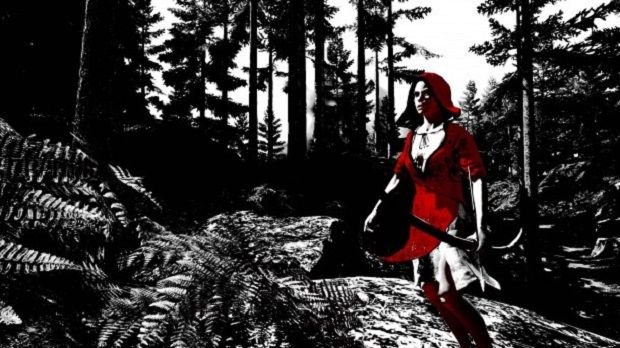 Surrounding the proximal areas are clusters of skeleton warriors — some melee-based, others with ranged weapons. It’s bad news if they catch wind of your presence, as they are particularly proficient in ensuring your demise. While the heads-up display may show 100 health, this dwindles at an alarmingly quick rate. If you die (which you probably will), it’s necessary to trek back to pick up all your loot, lest it disappear forever.

The difficulty wasn’t some sort of mistake that Blackpowder’s working on balancing. It was very much intentional. “We’re a small team. We don’t want to make a subpar ‘triple-A’ game,” I was told. Blackpowder is obviously making the game that they want to make.

Betrayeris largely an action game, with stripped-down role-playing traits. There isn’t any sort of statistics or attributes system, but there is an inventory. Different weapons can be equipped, and charms can be worn to enhance the character behavior.

That was the extent of my time with Betrayer. I couldn’t make sense of what happened, but I know I liked it. Unraveling the story at-large seems like an interesting prospect, and the game’s world appears well-suited for the endeavor. For now, we’ll just have to accept that this one remains largely a mystery.