Braid creator Jonathan Blow’s The Witness is probably my most anticipated PS4 game — almost definitely among games that are coming to the system this year. It, in its own way, stole the show at Sony’s PlayStation 4 announcement conference and stole E3 for me, too.

In a behind closed doors, hands-off demo, Blow took members of the press through a live explanation of the game, using his small team’s working build of the game. No “carefully manicured E3 thing” here. It was running on the PlayStation 4, looking quite close to completion, and I’m excited to delve deeply into its mysterious depths later this year.

The Witness is a puzzle game couched in an explorable world, emphasis on exploration. It’s “not about rushing through the environments as quickly as possible,” Blow explained. Indeed, this isn’t just a claim being made to encourage a meditative pace befitting of the atmosphere. The game’s puzzles require some consideration and they are designed in such a way to slowly teach you how to solve them.

The most consistent thing the game is about is nonverbal communication. You “build an explanation to yourself of what you’re doing. The game never tells you.” In fact, aside from some optional collectible audio logs that fill in the island’s backstory, The Witness is almost entirely reticent.

You start the game in a dark corridor and the only thing to do is go forward and begin opening doors with simple line puzzles through simple mazes, setting precedent for all the subsequent puzzles to come. In one of the early areas you will encounter, two rows of puzzles of increasing complexity sit near each other. Earlier still, there is a door with a nonsensical-seeming, incomprehensible lock barring you from entry. 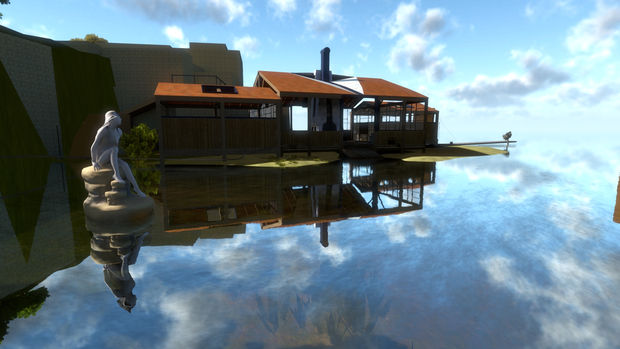 After you complete the first row of puzzles, and then the second, you’ll find that, “nothing actually happened. Nothing obvious,” Blow said. In the first set of puzzles, you try to guide a line through a maze while covering all the black blips o screen before getting to the end. You can’t run into yourself, so this gets more challenging. In the second set, you intuitively begin to realize you have to separate blips of different colors on your way to the maze’s exit.

Each set of puzzle starts out simple and gets more challenging. You can theoretically blow by the first few quickly and by luck, but you’ve not gained any understanding of how they work and would subsequently be stuck when solutions become less clear and less prone to guesswork. You’re tasked with figuring out the rules of the puzzle and then applying them.

While it seems nothing obvious has resulted from solving those two sets of puzzles, you’ve actually organically learned how to operate those puzzles and then, eureka, you’ve developed the skill set necessary to solve the aforementioned, seemingly incomprehensible puzzle that locks the door. 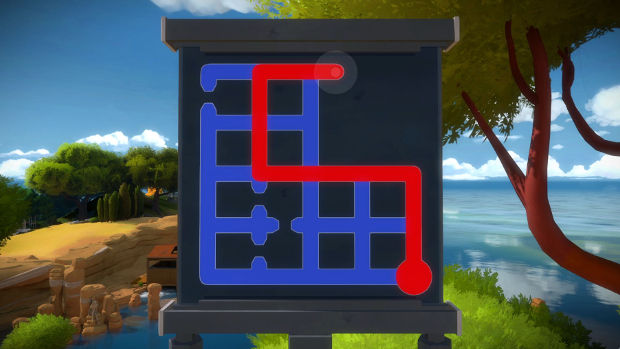 “The key was in my head the entire time,” Blow explained. It’s a fascinating concept. The Witness bears similarities to adventure games, but the differences are paramount. It is entirely open and explorable, rather than linear. The puzzles are obviously present and divided into palpable sections, keeping the logic from spiraling out of control. “As a game designer who was ideas about games I look at [adventure games] now and just think they’re all bad,” Blow explained.

When I asked him how he felt about comparisons to the well-known Myst, Blow told me that his game bore important similarities to Myst, minus all of the things people — or Blow himself — dislike about the game.

The idea that solving puzzles can give you actual intuition — a metaphorical key inside your head — rather than a throwaway inventory item is an interesting refutation of cliche game mechanics and systems. It also seems emblematic of the general theme of The Witness as a game that encourages more consideration than is typical. 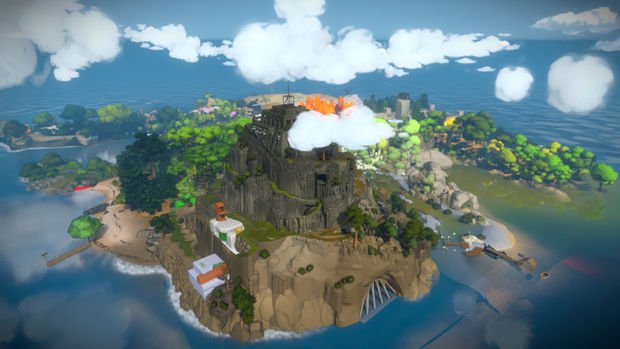 The Witness is not, however, arcane or intentional obfuscating. Puzzles and other elements in the environment are constantly linked through cables that light up when active, keeping you from circling areas trying to figure out what you’re supposed to do. You know: you’re supposed to do the puzzles, and the game teaches you to do them.

You’re free to wander the island, but there is a goal that reveals itself clearly upon clearing the first of ten areas. Within these areas, progress is relatively linear, making you feel forward momentum, yet not locking you into a certain area if you’re stuck. In fact, only seven of the ten areas need to be cleared, though “something better happens” if you clear all ten, solving all the puzzles. Your level of engagement decides how much you understand the game and its underlying intent, but Blow is “preparing for variable levels of engagement,” partially through intuitive design.

“When you go in, if you just are interested in a puzzle game and you’re not really looking at story or philosophy or anything like that, there is a really good puzzle game,” Jonathan Blow said here in this developer video. “But if you want to read further than that, there’s other layers.” 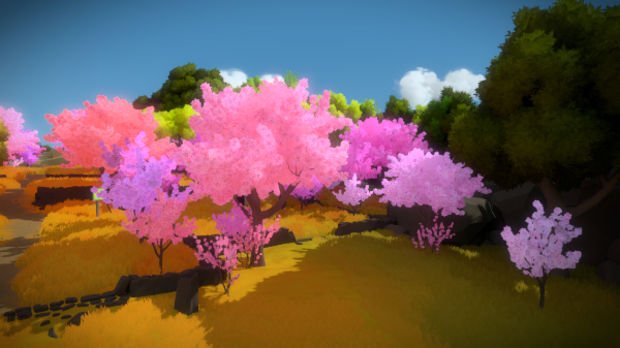 I believe it. The puzzles we were shown were varied and clever, though often mechanically simple. One segment that necessitated completing three similar puzzles to continue made you start from the first if you messed up on the second. “You can’t brute force it or you end up having to keep walking back and forth like an idiot,” Blow explained.

Every element of the game’s design seems intricately considered to serve Blow’s intentions (Blow “designed 95% of the puzzles” in addition to programming for the game and serving as its figurehead) and through this fastidiousness a plainly interesting puzzle game was borne for those only in it for the surface level. And it’s a damn fine surface level. Beyond the puzzles, the game looks absolutely stunning with it’s almost 3D vector art aesthetic and gorgeous cherry blossom trees, among other geography — I’m a sucker for cherry blossoms. And I can’t wait for The Witness.