If you’re in the mood, the Switch ports are worth a look

I didn’t set out to buy Borderlands 2 for Nintendo Switch, but it worked out that way over the weekend.

Why? Well, it’s been a while – I haven’t gotten around to Borderlands 3 yet (or even The Pre-Sequel), and I’m not sure I ever will – but split-screen on my go-to co-op platform sounded pretty appealing.

If you’re considering getting Borderlands: The Handsome Collection (BL2 and The Pre-Sequel) or the Borderlands Legendary Collection (BL1, BL2, and The Pre-Sequel) on Switch from a similar state of mind, you’re probably curious about how these ports look, run, and feel. You might’ve already heard that they’re aiming for 1080p (docked) at 30 FPS, and that there’s optional motion/gyro control support.

I’ve only had time to check out Borderlands 2, but so far, so good in single-player and two-player local co-op – it’s stable. It’s smooth enough to keep up with at least the early-game chaos. While the Switch isn’t my favorite console for shooters – not even close – I’m happy overall with how Borderlands feels.

Your best bet is a Switch Pro Controller if you’ve got one, or playing in handheld mode, which feels like the dream of Borderlands 2 for PlayStation Vita brought to life. Both of those options feel natural. I don’t particularly care to use the Joy-Con for a frantic FPS like this, but maybe you’re more used to ’em. Whichever route you to take, brace your hands for some teeth-chattering rumble (or toggle it off).

Here’s a look at the gameplay, controller, and split-screen options for Borderlands 2: 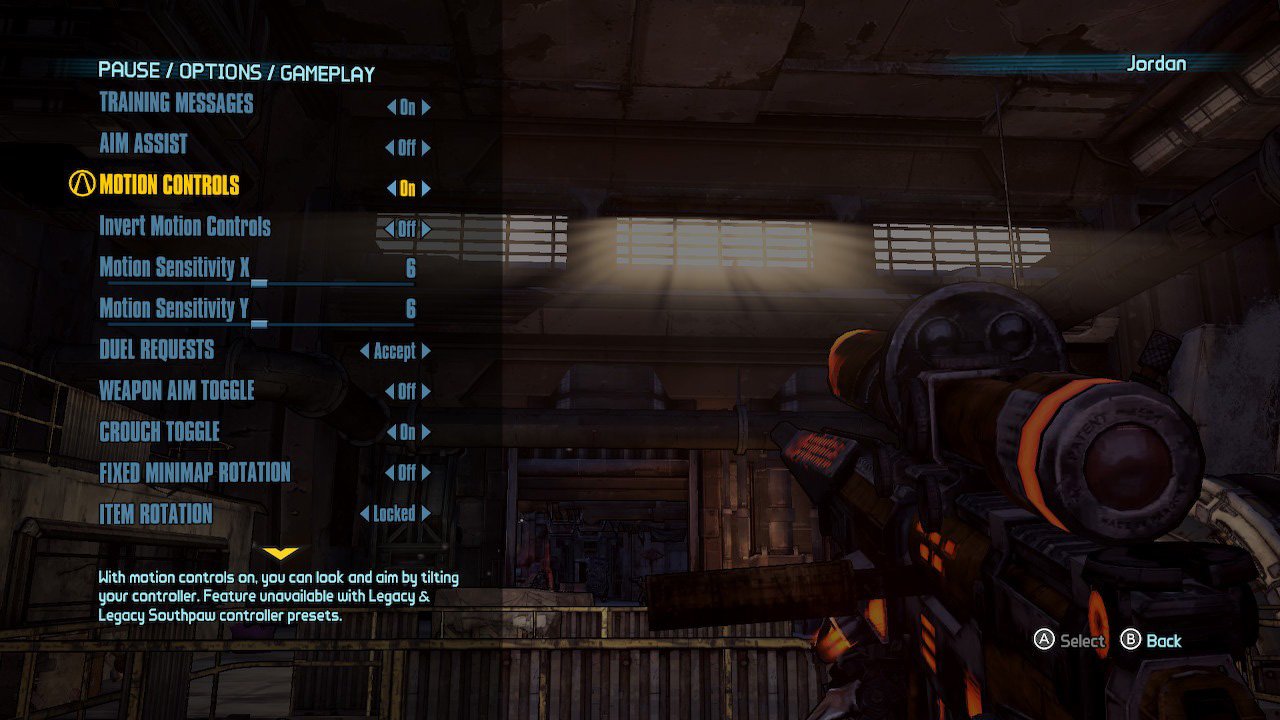 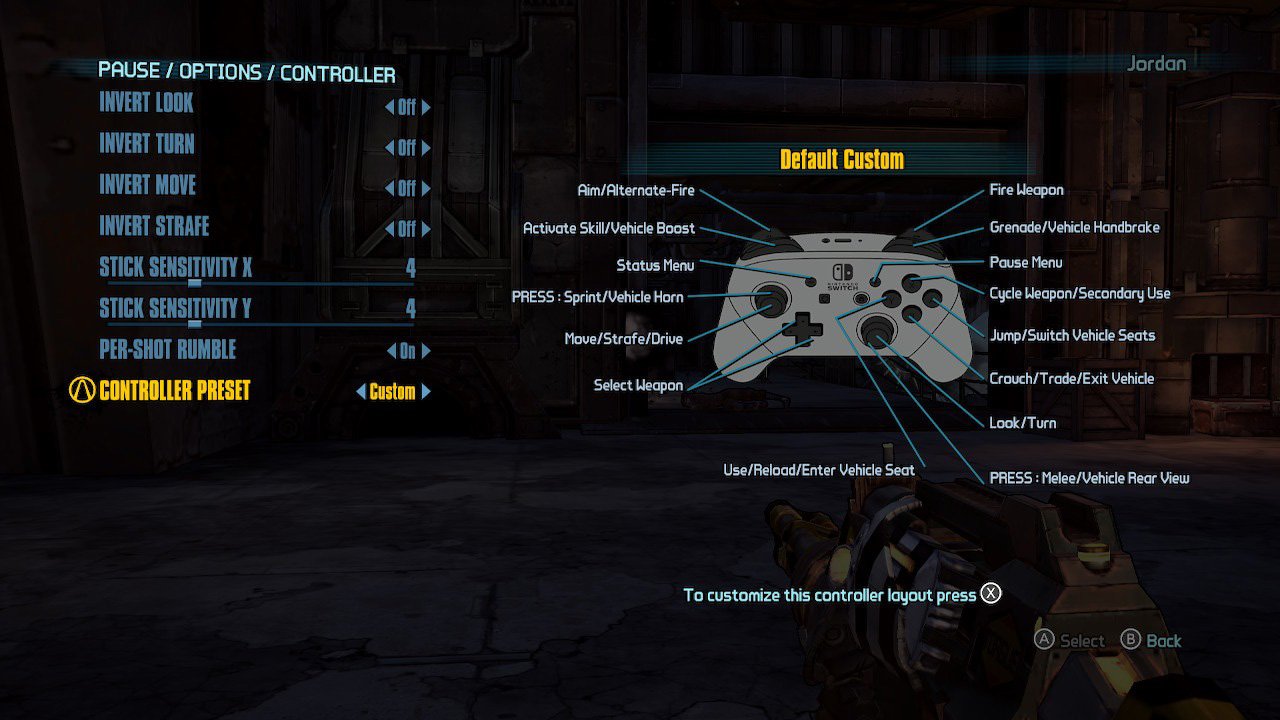 This is where you’ll find the per-shot rumble toggle. Apart from the default control scheme, there are several other presets and you can manually customize the control layout to your liking. 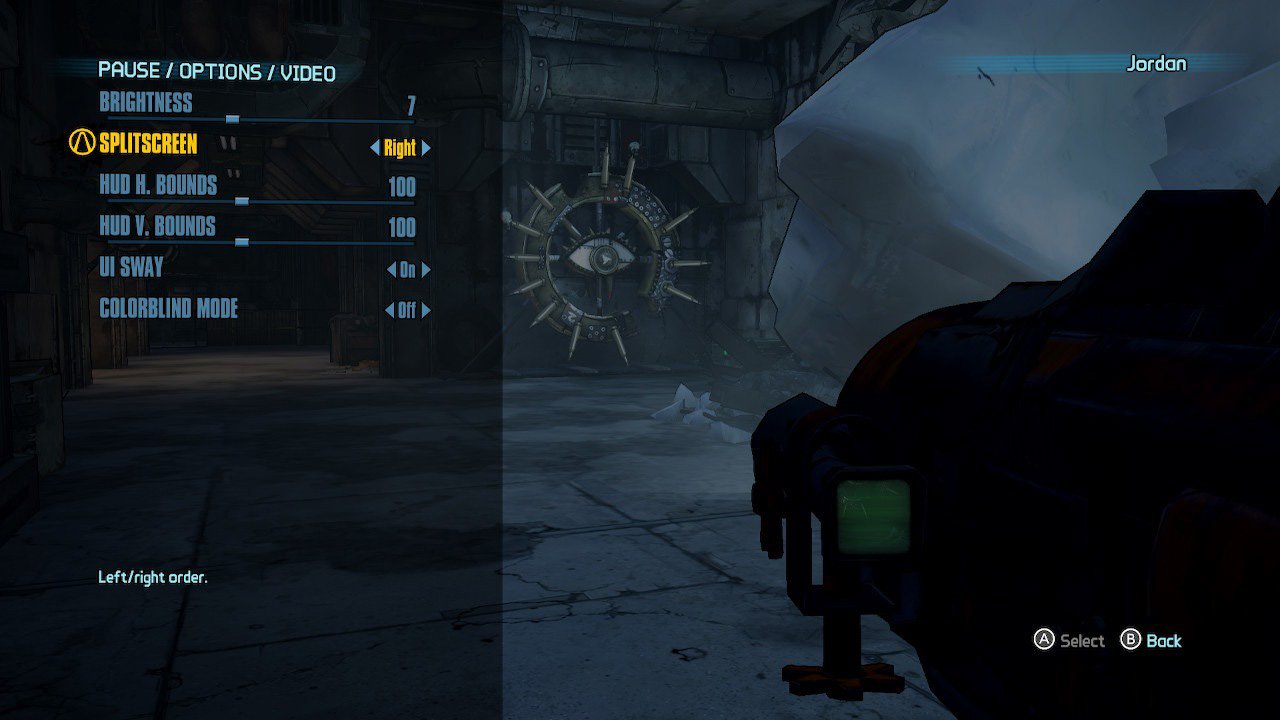 For two-player split-screen, you can designate which player appears on the left and right side. 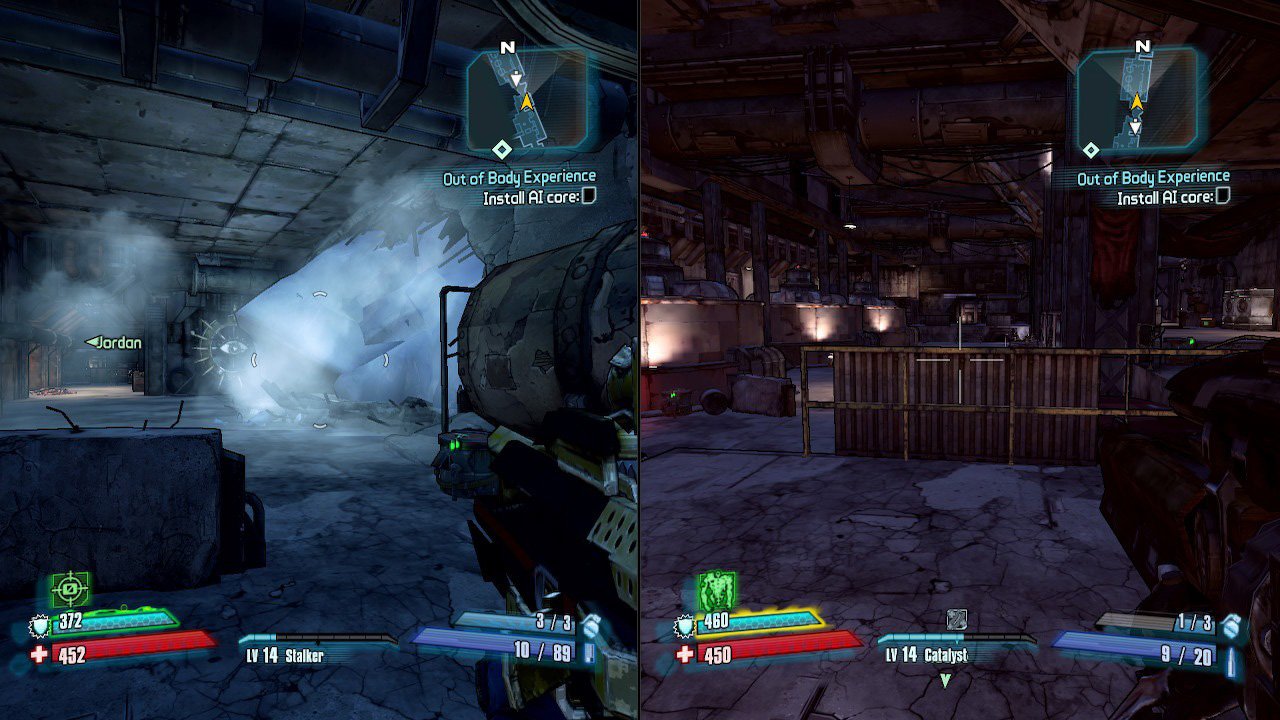 Split-screen multiplayer is cramped, but not unbearable. I got used to the vertical format after a few firefights and now I only really have issues with the skill trees, which can be hard to read at a glance.

As a quick aside, Borderlands 2 is the odd man out in that it doesn’t have an FOV slider on Switch. According to other players, the original Borderlands and The Pre-Sequel do have an FOV option.

In terms of network options (by hitting the minus button from the main menu or pause screen), you can do “Online Friends Only,” “Online Invite Only,” “Online Public” (open matchmaking), “Local Play” (for nearby Switch consoles), and “Offline” (split-screen). For split-screen co-op, if your partner doesn’t have their own Nintendo Switch Online account, you’ll need to play in offline mode. You might see a warning message when they initially try to sign in – just ignore it. They don’t actually need a paid account.

Another tidbit that I was curious about coming in and I’m sure some of you are wondering about too: even though the Borderlands games are sold as a bundle, you can install them individually.

Considering how much DLC is packed in (essentially everything except for Borderlands 2: Commander Lilith & the Fight for Sanctuary), that’s a godsend. Even though I have a microSD card, I still ended up having to delete games I haven’t touched in months to accommodate. BL2 alone needed 21.5GB. As for the physical Switch copy, you’re still looking at mandatory downloads. They haven’t learned.

What can I say? I don’t care for the humor, especially not in 2020, but I’m a sucker for the Badass Rank challenges and minor stat boosts. I appreciate that these Switch ports weren’t rushed out the door. Now I just need to figure out if I’m sticking with Gaige and learn to not be so grossed out by Goliaths.

Unlike a few too many other eShop impulse buys, I don’t regret double-dipping for Borderlands 2. The Switch version is a surprisingly good time on a technical and “does this game still hold up?” level.

If you’ve been on the fence, hopefully you have a little more peace of mind.

[This impressions piece is based on a retail build of the game purchased by the author.]