We were shown a new level in Call of Duty: Ghosts and I can confirm that it looks a lot better in person than it has on streams and at conferences. The level we were shown opened on top of a roof, behind enemy lines, in Federation space, during some sort of fireworks celebration.

It looked damn good. The fireworks popped with great color, the expansive city lit up reminded of most gorgeous big cities at night. Everything without lights looked a little drab and gray as an affect of making it nighttime, but still wanting players to be able to see everything, of course.

From there, things got more familiar. 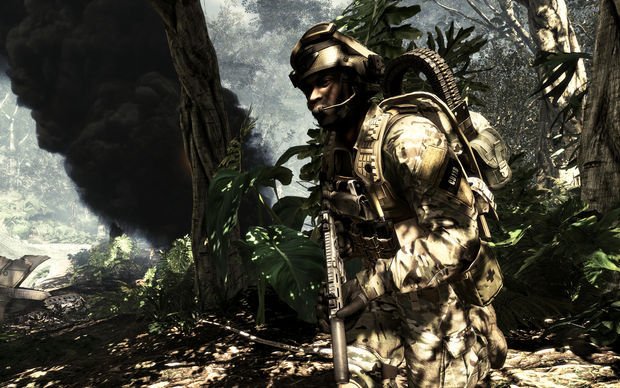 In the first portion of the level, one squad member commands your character to shoot his line and so he did, resulting in the crew zip lining over to the adjoining, target building. The goal was sneaky infiltration. Walking on the outside of the building, tied to ropes, looked pretty cool. You could hear and see the wind blowing, sometimes affecting your silenced shots into the heads of unassuming guards.

The protagonist repelled down and all around the building, silently picking off random adversaries at his squadmate’s behest. “On you, bro,” is actual dialogue from the game. Bro, indeed. Repelling also made a likely unintentionally cute squeaky sound.

Then the bros sneak into a server room of some sort and the main character does some hacking at the behest of his squadmates. When enemies appear to be coming down the hall, your squadmate yells for you to hide in an alcove between the servers, at which point you silently watch the guards walk by. One stops, almost sees you, but your bro cuts his throat before he can sounds the alarm.

On the way out of the building, you repel downward. At one point there is a guard looking out the window. If you walk by him, he sounds the alarm, slightly altering the next portion of the level. If you spot him, you can take him out. 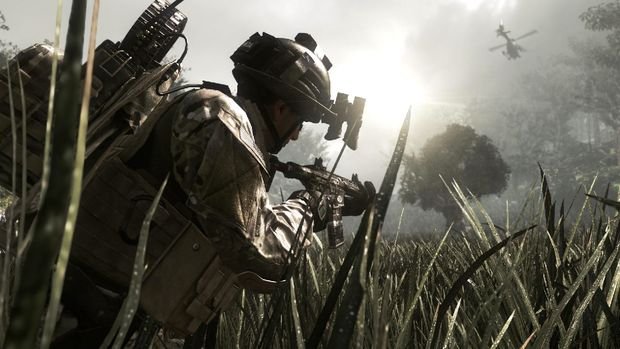 My favorite part is when there was one guard standing on a balcony below you, and your character pulls out a knife and does a Dishonored-style drop-stab for no apparent reason. Maybe he got bored of linear shooting? Incidentally, that leads to him being spotted and the game goes slow-mo so you can throw the knife at one of the spotters and then continue shooting.

The demo then jumped forward in the level as things were going to heck and the entire building began collapsing. Go big or don’t get to go home because you’re a war criminal, I guess.

It was very much the ubiquitous, familiar Call of Duty. Your character can shoot some dudes, though it didn’t seem all that necessary. The floor collapsed in a big set piece and you slide against your will into all sorts of debris and the like. If you want, you can shoot enemies while doing so. The demo ended with the squad seemingly about to fall out of the building and to their death. Oh, it was running on Xbox One.