[There’s a lot that can be said about the infamous ‘chainmail bikini.’ It doesn’t provide any actual protection, it’s only for sex appeal, and someone really ought to Repair Her Armor. Jinx 01 looks at it a little bit differently: maybe it’s okay to play as a bikini-clad catgirl. ~ Shade]

I recently started playing Final Fantasy XIV. Given a choice, I always play as female character in games, so I created an adorable catgirl archer and named her Alisia; after Alisia Dragoon. I noticed that the character editor didn’t allow for huge bust proportions (admission: I maxed it), which is actually a bit unusual. That kind of impressed me for some reason (because it’s ‘progressive’?), and everything was great. At least until I was a few hours in and Alisia found her next armor upgrade: the metal bikini pictured above.

Yet I was sitting there, torn between what I knew I ‘should’ feel – some sort of outrage or revulsion over this armor – and how I really felt about it, which was that it was just fine.

At first this new look was a bit jarring. Alisia’s armor ‘upgrade’ was a two-piece? It certainly triggered the awareness that Repair Her Armor and similar projects created in many of us – that women in games tend to have impractical armor designed to show off their bodies rather than protect them. That they are underdressed and oversexualized. The typical assumption is that this is a bad thing because it promotes objectification and is done only to titillate men. I know this argument, and on an intellectual level it’s where I’ve usually been. I have degrees in English and anthropology, I’m a liberal, I know how this shit works and where I should stand on it.

But despite all that, I didn’t mind the armor at all. I felt sort of guilty. Was I a bad person for not minding if my character was wearing a skimpy outfit? Had Alisia herself become some monstrous affront to feminism? Was she, as a character, a terrible person for daring to dress this way?

So why doesn’t skimpy armor on female characters in games bother me? And is it a bad thing that it doesn’t? It took some self-reflection, but I found a couple reasons I’m generally okay with it. 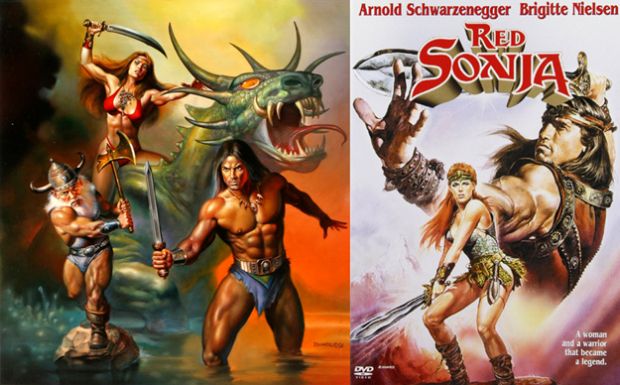 – On the left is Boris Vallejo’s cover art for Golden Axe II on the Sega Genesis.

To start, I grew up in the ’80s. Conan, Red Sonya, and the Boris Vallejo style characters in film, art, and games, didn’t wear much armor at all. They celebrated their bodies, and displayed them as a sign of power and self-confidence. It’s not ‘realistic,’ but neither is much of anything in fantasy settings. In a game like Dungeons & Dragons armor typically becomes more expensive and ornate as its defensive power increases – the assumption being that enchantments are what provide the extra protection in high level equipment. So how the armor looks becomes an aesthetic choice made by the character, the player, and the game developer.

Second, I fall into the camp that feels displaying one’s body can be a form of empowerment. When I was younger I wore tight black clothing most of the time – a slim, almost feminine body is considered attractive for goth guys, and I enjoyed displaying that I had one. In fact, goth culture in general celebrates sexuality. When such a display is an active choice of the person, it’s not objectification – it’s self-expression, even empowerment. Yes, some of the people viewing them may do so in an objectifying, negative way. But why would you privilege their view over the view of the person expressing themselves?

I’d like to think that with games, like with real life, we can start moving beyond the clichéd trope that skimpy clothing or sexual expression automatically means ‘objectification’ and is negative. We’re coming to accept that people in real life can find empowerment as they like, by dressing as they like, and I think that kind of agency should also be given to players and their characters. Let them dress however they want. It’s nobody’s business but their own. 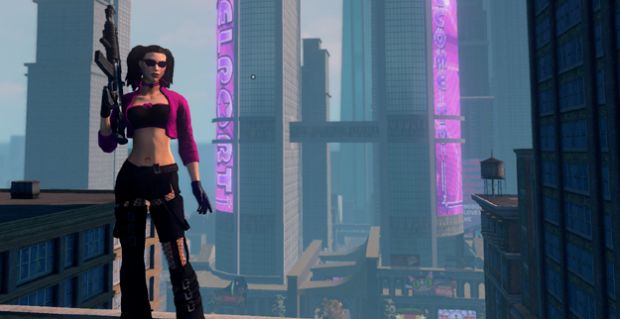 This all leads to a bigger question: when it comes to how I dress and design my character, why should I feel a need to explain myself at all? Ultimately, if video games are fantasies then like fetishes and other personal tastes it seems to me they are best left unjudged. If I like to play a game as a scantily-clad catgirl, whose business is that other than mine? Whether my reasons are purely sexual or more complex (hint: it’s #2), I don’t deserve to be judged for my tastes. Nor do the developers for providing me with a choice appropriate to those tastes.

Arguments about skimpy armor, and about objectification and ‘oversexualization,’ tend to make huge assumptions about the people who make and consume these games, and about their motivations for liking skimpy armor and ‘sexualized’ characters in general. Typically these arguments assume that the characters are made by (misogynistic) heterosexual males for consumption by (misogynistic) heterosexual males. Yet even if skimpy armor exists solely to play to male fantasies… what’s so wrong about that? People don’t play games to see a didactic model of how the world should be in real life. The reasons they play and enjoy the game, and the different aspects of it, are their own.

– The Shantae games are sexy in a fun, playful way. I freaking adore them.

Let’s take me as an example. Why do I play a catgirl in Final Fantasy XIV? It’s… complex. Alisia reminds me of a friend who passed away, who I like to think of as being out there having new adventures. She’s also sort of a daughter figure. Finally, she expresses the ‘feminine’ side of my personality that I’m forced to repress in our society. Sexual attraction toward her doesn’t really factor into any of this.

The feminine, gender expression part is especially important to me. I’m a ‘femmy’ guy, but I can’t really express that in real life in dress or posture without harassment and assumptions about my sexual orientation. But in video games I can express that side of myself without judgment by playing a ‘sexualized’ female character. When Alisia is dressed in skimpy armor, she is not a sexual object that I desire. Rather, she is an embodiment of my own, personal sexual expression and empowerment.

Not quite the ‘male gaze’ you were expecting, was it?

Don’t get me wrong, I think taking a critical look at gaming from any theoretical perspective is just fine. In fact, I think it can be a great way to stimulate self-reflection and debate. But that intellectual analysis shouldn’t be used as a weapon to attack people or games in a moralizing way. In a world that is becoming more positive about letting people express their sexuality how they choose, being judgmental about how characters dress – or pose or act – is increasingly difficult to justify. If you step back and give agency to female characters themselves, then judging how they dress, I would argue, is antithetical to a feminist ideal. Nor should players or developers face judgment for their chosen ways of expressing themselves.

That’s what this is about, isn’t it? Expression. How people find expression and empowerment in their own ways. I will take freedom of expression over repressive judgment any day.

So if you’ll excuse me; I have to go be a catgirl.