Don’t come and go in a heated rush

We have been keeping our eyes on Chasm for a long time now. Ever since it initially showed up, it looked like it checked off all the right boxes to be a retro dream game. It has procedurally generated dungeons, Castlevania-esque inventory and map management, and absolutely gorgeous pixel art.

Upon starting up the demo at PAX East, all of that was there. I delved into the demo with reckless abandon, and was promptly killed by a wayward slime. Hmm. As it turns out, Chasm requires a bit more caution and care than expected. One missed jump can land protagonist Daltyn in a spike pit, but more frequently, one mistimed sword slash can leave him open to attack. 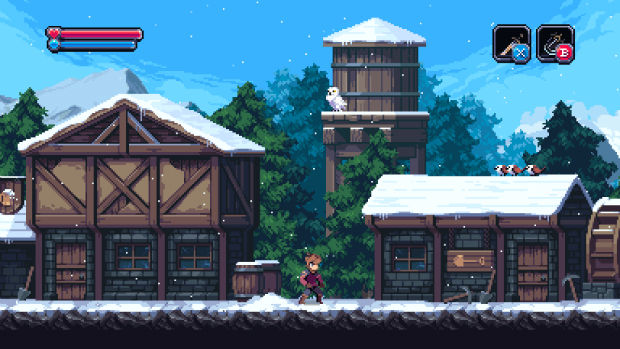 Despite working as a soldier, Daltyn is far from being a combat powerhouse. Immediately after fighting the first slimes and rats in the tutorial dungeon, it becomes clear that haste is detrimental when approaching enemy creatures.

Sword swings take a long time to execute, and the animation must completely finish before new inputs are accepted. This means that during an attack, the player is stationary and vulnerable to counterattack if the first attack is mistimed. Since there is a bit of knockback when an attack does connect to an enemy, an immediate second attack from the same spot would often miss and cause the same consequences as before.

The result is very deliberate combat, where each sword swing has heft and must be carefully considered, and mashing the attack button is the quickest way to get killed. On the subject, one of the developers did say that combos would be implemented depending on the weapon equipped.

Jumping does provide a bit more freedom, where Daltyn can be moving while attacking if he is airborne, but he still must time his sword swings well.

The reason I spend so much time on the pacing of the combat is that it is likely to turn off certain players who prefer faster action in their metroidvanias. After having most recently played Guacamelee!, Chasm‘s combat was jarring. The two are on opposite ends of the spectrum, where the former is fast and flowing while the latter is much more pensive and restrictive.

That is not to say that the combat is bad. By the end of my second run, I got the hang of exploring the depths without too many missteps. Through the demo area, I witnessed the opening of the mystery surrounding the mountain town and its mine, and uncovered a few clues pointing toward some potential explanations. 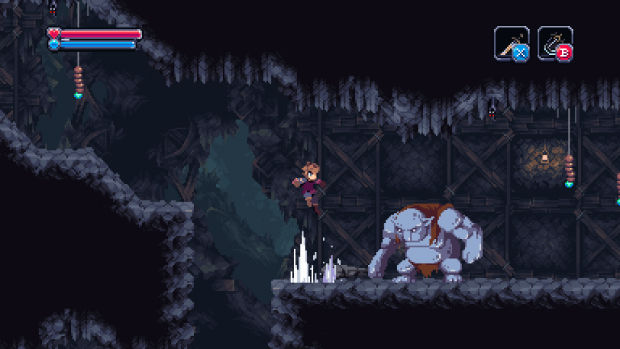 Not a lot of inventory management was shown in the demo, but the framework for it is there. What is present hints at a system similar to Symphony of the Night‘s, where the player can have items equipped in either hand, with each assigned to a different face button. Though none were shown in the demo, it seems reasonable to expect off-hand items more interesting than mere throwing knives or shields.

All in all, though I was taken by surprise with the control, Chasm is still looking as good as ever. The demo featured some light puzzle solving and genre staple backtracking adding to game’s requirement for a thoughtful approach. By the time I was descending down the newly fixed lift, my mind was in the right place and I felt ready to take on what would come next.