Personally, I think the quality of Mario levels, now that we live in a Super Mario Maker 2 world, has gone up considerably. There are some cool, high-stress runners, some comically-themed levels, and some fun, puzzle-oriented levels.

The Destructoid community also has its own fair share of aspiring “Mario Makers,” from casual designers to intense critics and everything in-between, creating all sorts of levels that you’d expect from this community of weirdos. So, just like last time, here are a new smattering of custom levels made by our happy-go-lucky readers, all test-run by yours truly (in some cases, quite painfully). 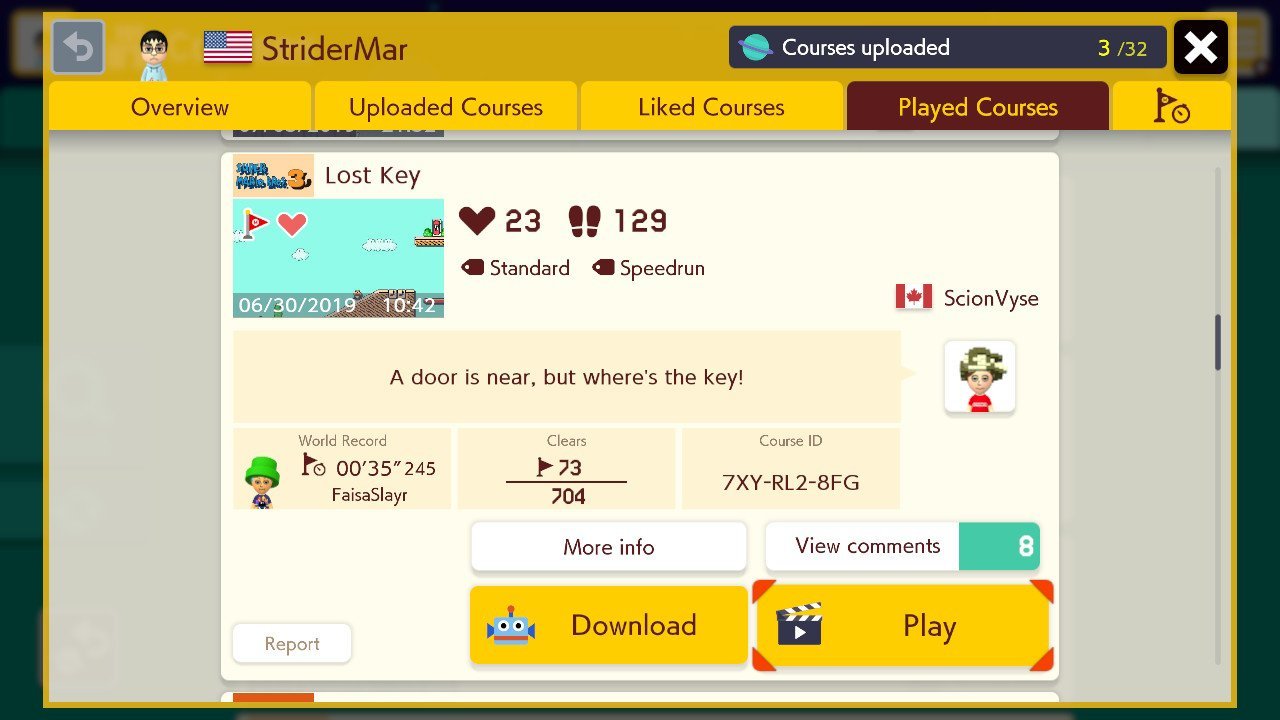 First up is “A Lost Key” by Scionvyse. This level is sort of more in the vein of being designed like an actual Super Mario level, as opposed to being a stressful speedrun or a zany puzzle-platformer. Once the locked door is taken care of, the rest of the level has some actual platform gameplay my muscle memory for jumping hasn’t experienced in a while, and not in any maliciously difficult way either. 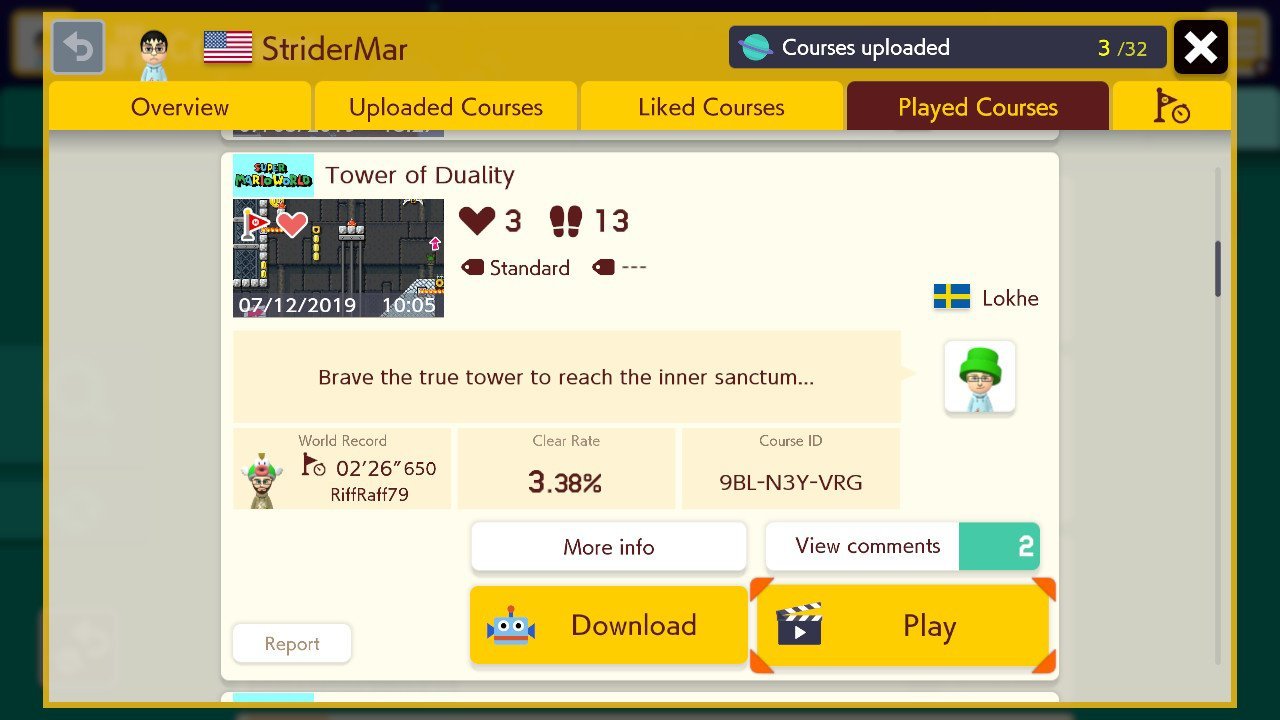 Lokhe‘s “Tower of Duality” is a level I enjoyed. Or enjoyed after I got past a very difficult and narrow jump clearance anyways. 70% of my time was spent repeating the first jump segment over and over, and a few times I’d screw up on the following buzzsaw/Bullet Bill combo obstacle so I’d have to start over.

Once I threaded the needle though, the rest of the level was a fun jaunt of crisscrossing door paths. Maybe you’re jumping skills won’t struggle so much as mine did, but after the first major obstacle, it’s all gravy and good times after that. 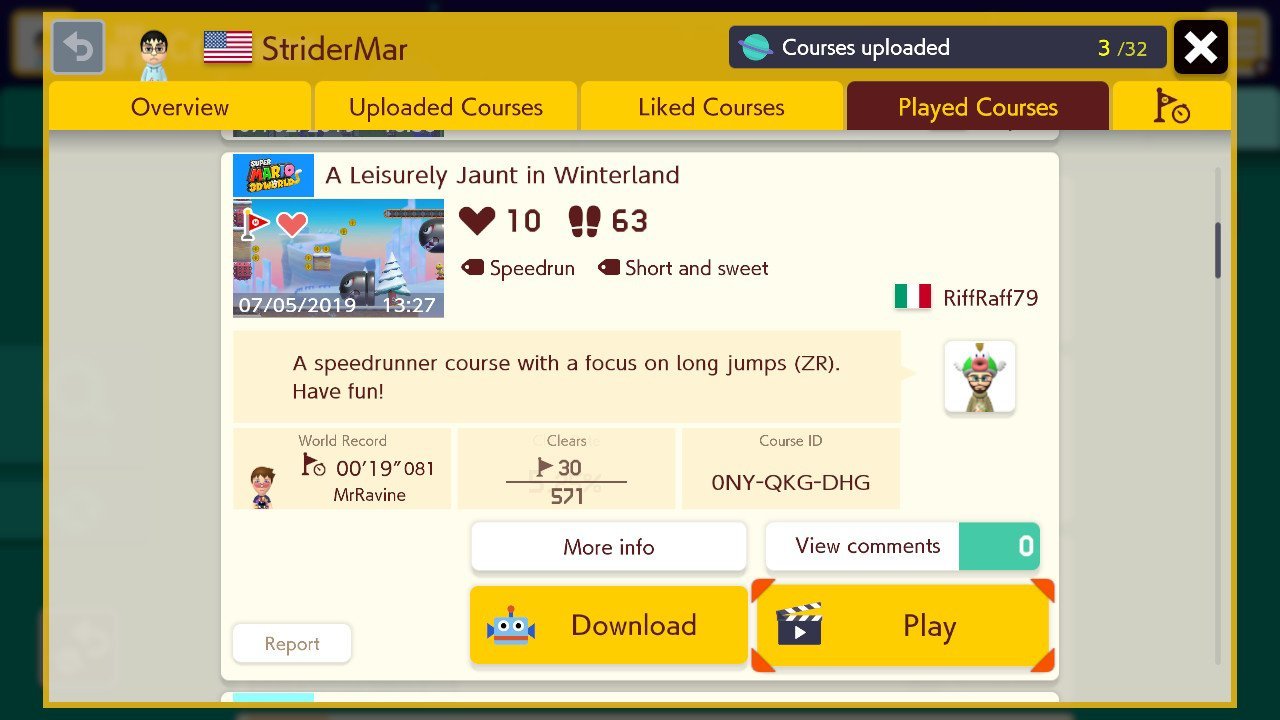 RiffRaff’s “A Leisurely Jaunt in the Winterlands” is actually anything but that. I blame myself for most of my deaths because the level is designed specifically around something that is stated up front in the level’s description: using long jumps (ZR) to clear the gaps!

After dying a couple of times by mistiming my jumps, things got a bit easier, but, this level is never a pushover. There’s still quite a few other design elements to shake things up beyond the long jumps, so I gave this level a hearty favorite. 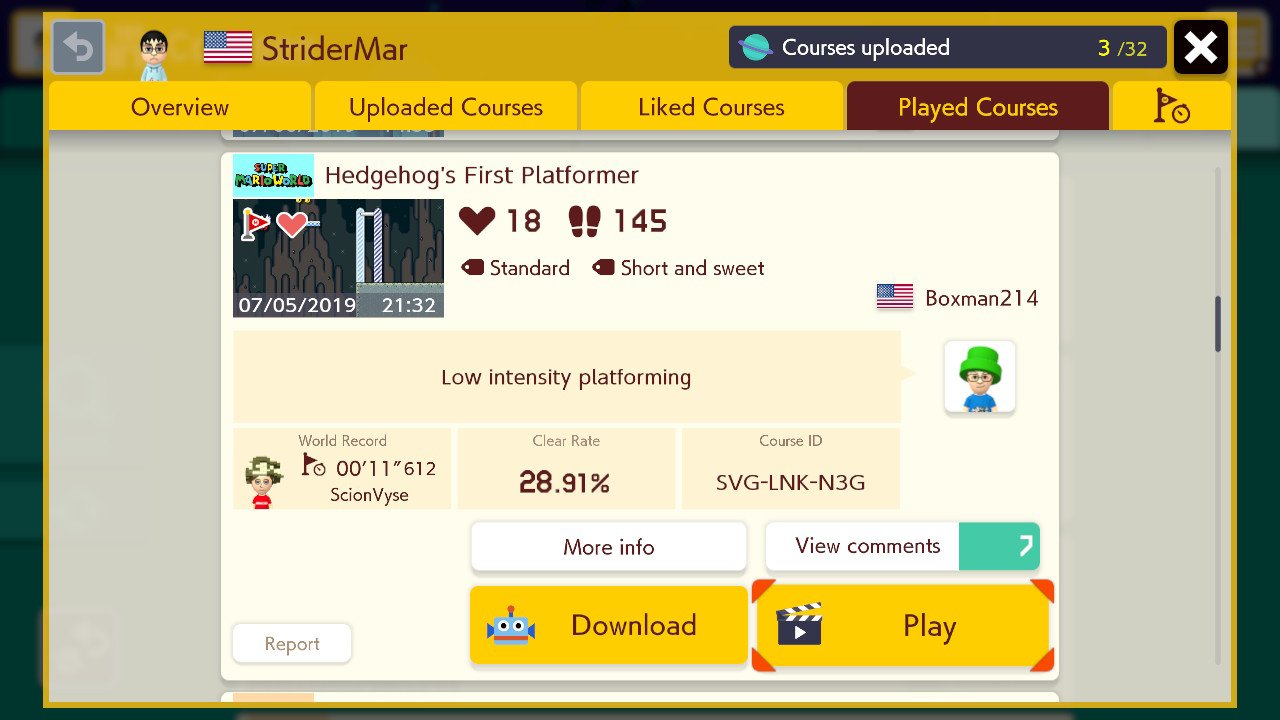 “Hedgehog’s First Platformer” is at least honest about itself. Boxman‘s custom level is a fairly basic experience, but let’s not forget there are levels we want to spend days and days tweaking and optimizing, and there are also levels we just want to create in just a few hours and enjoy.

There is something to be said about taking a leap of faith, with only the assurance of coins telling you that you will be fine, and just dropping straight down without endangering yourself completely. 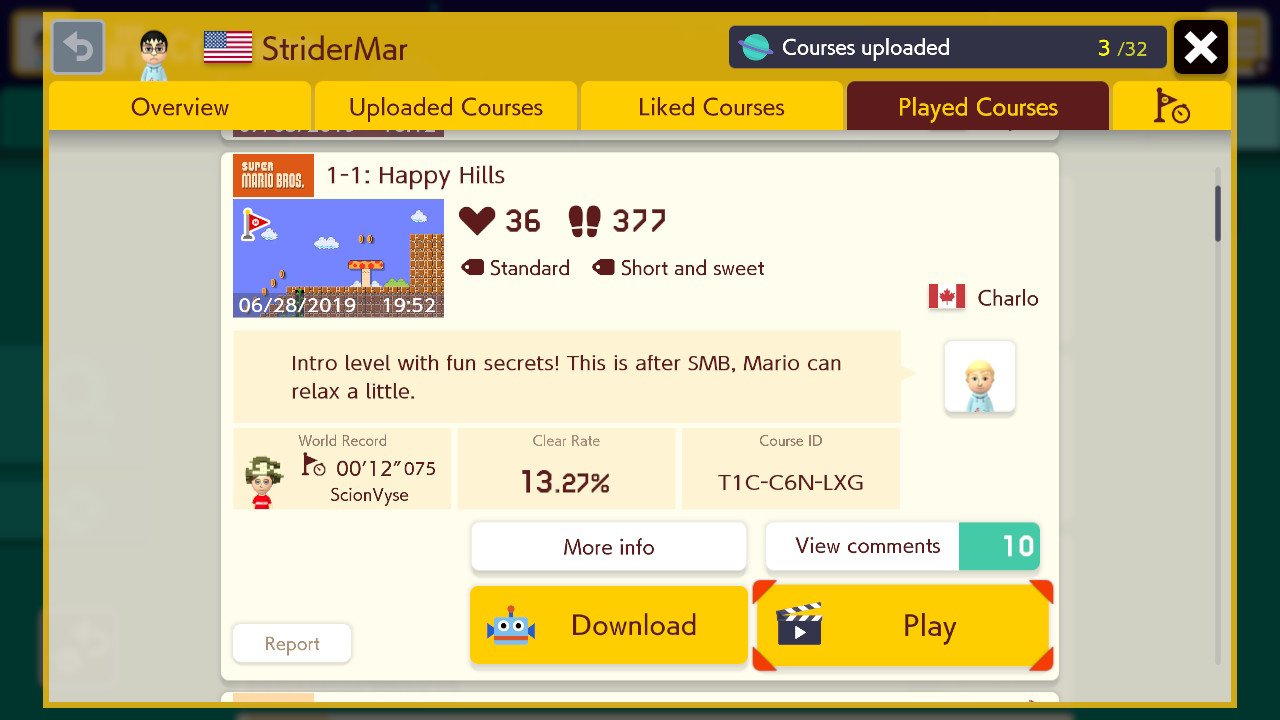 The Blonde Bass‘ “Happy Hills 1-1” is the first in a series of levels designed to canonically take place within the Super Mario series of games. The first entry is pretty straightforward, with the only notable thing being a gauntlet of piranha plants as you descend a plateau. But all the future levels in Bass’ portfolio that follow the number scheme are also pretty nice. My personal favorite is “Basic Beach”, so try Bass’ Happy Hills and delve into the rest of his levels in his profile to see what else sticks for you! 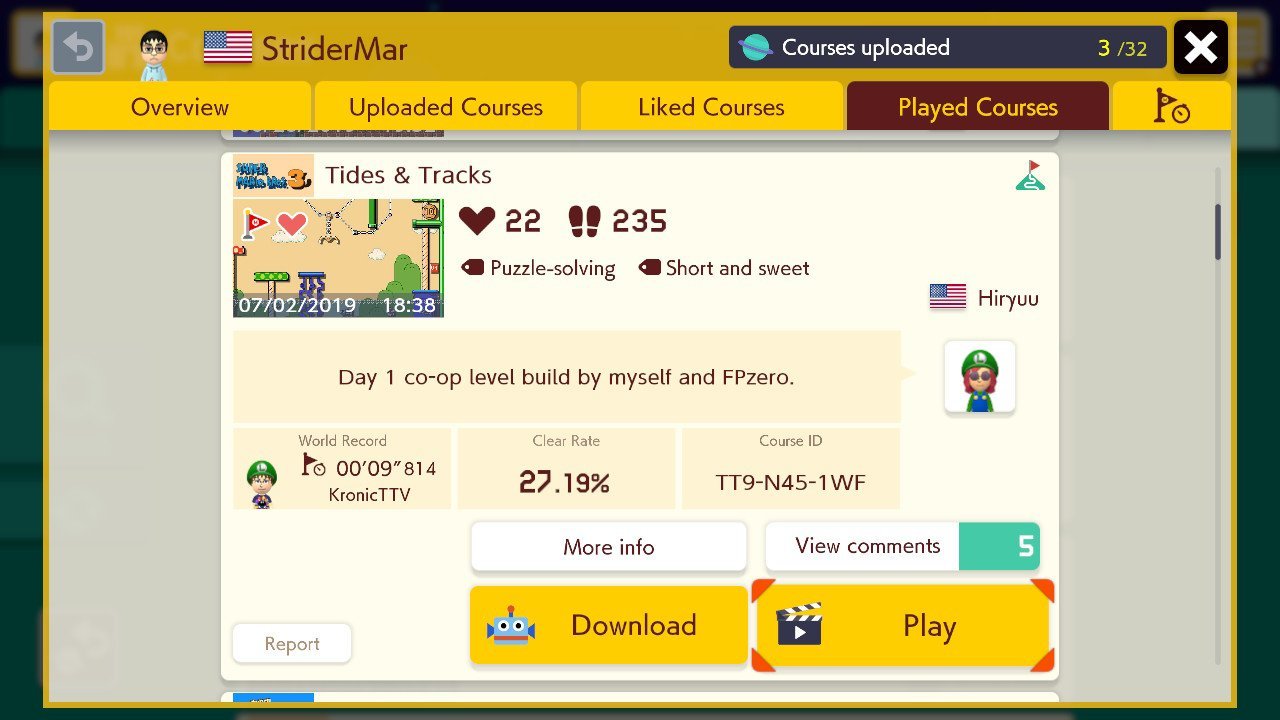 Hiryu I’d say is the community’s resident art critic for Mario levels, as he’s perused a lot of the community’s levels already and offered his own critique and tips for what’s good and what could be good for improvement. “Tides & Tracks” and “Mr. Goomba’s Wild Ride” are good appetizers, but Hiryu’s latest stage, “You Should Make An Ice Level”, has the design that I really liked the most. It really feels like a normal Mario level that would’ve been right at home in any Super Mario 3D World title. All the alternate paths were really fun to explore too.

So that’s what I’ve gathered so far from our community for great Super Mario Maker 2 stages. But this feature will be returning to feature all the great levels made from our awesome community. Until next time, keep making! And don’t forget to leave your own levels in the quick posts or in the comments below.