It makes sense that when word gets out that Harmonix is working on a new game, everyone is going to want to see it. This was exactly the case at an invite-only showing earlier this month, taking place during D.I.C.E. Summit 2014.

I sat in a small meeting room in a Las Vegas hotel with a few other journalists, and Double Fine’s Tim Schafer worked his way into the room to also see Harmonix’s next big project. When attendees were asked to guess what kind of new game this might be, Schafer called out jokingly, “A first-person shooter!”

No one reacted as they probably already knew.

A few minutes later, after Harmonix’s John Drake began the presentation of this new game, Schafer blurted out with a surprised laugh. Apparently he was joking about the game being a first-person shooter, not knowing that he was absolutely right. 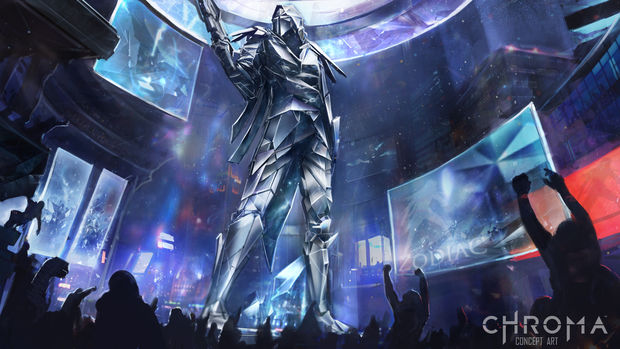 Chroma is a free-to-play musical, arena-based first-person shooter for PC, powered by Unreal Engine and coming to Steam. Let that sink in for a moment.Harmonix says that the concept has been around for two years, but the actual game has only been in development since October. So what we saw earlier this month was early in the pre-alpha state.

Hidden Path Entertainment (Counter Strike: Global Offensive) has teamed up with Harmonix in what sounds like a pretty even split on the development of Chroma. Hidden Path holds down the fort with all of the shooter aspects of the game, while Harmonix does the rhythmic and musical side.

Each team has their own side of an arena in Chroma, and each side has its own music. Getting closer to winning causes your side’s music to play louder, with the goal being to overtake your opponents in both score and song. At key moments of the song, a musical change up can occur, and the map layout can change along with it. For example, a stylistic change in music could also have sniper towers rising up from the ground to mix up the map. 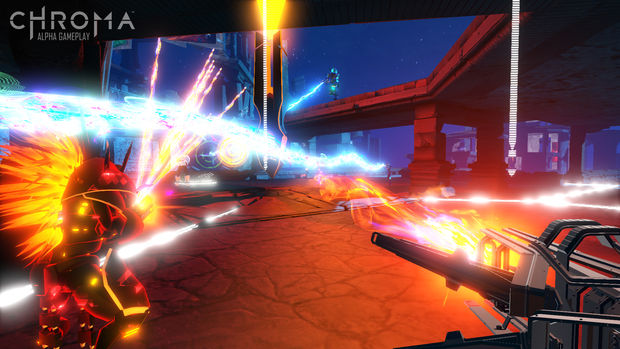 Music is also deeply tied to the shooter mechanics. For most of the weapons of Chroma, you’re free to fire at any time. But hitting the right beats or staying on rhythm will bring power and accuracy bonuses, and some actions can only occur on beats. For example, the assault class sub-machine gun needs to be clicked on the beat to reload. The grenade launcher can be fired at will, but it’ll only detonate on the downbeat of any given measure. The engineer class is probably the most musical; it features a Rock Band-style HUD that has the player clicking the mouse buttons to line up with the song’s beat markers to fire properly. The engineer’s gun actually won’t fire off beat.

Harmonix says that you can think of each teammate as a band member, and their weapons as their instruments. Weapon fire actually sounds like instruments, and ties in with the music nicely. It seems like a lot of thought went into how sound effects could be musical accents.

Chroma has a futuristic, space-y look that, from the maps we saw, seemed to be made up of a lot of angled platforms and other structures. It’s what I’d imagine that a battle arena would look like on some futuristic alien planet. The different class types looked to match with their lack of color and angular faces. The game is almost completely monochromatic, save for the brilliant lighting and coloring coming from the weaponry. The whole thing is set to electronic music that seemed heavy on beats and light on melody.

I tried two different maps in this first hands-on session of Chroma. At first, I left my teammates to work on the objective in a point control map while I played with some of the rhythmic features of the map. Jump pads let you quickly bounce from one to the next by tapping the spacebar on the correct beat. There are different bars that require taps on whole notes, half notes, and quarter notes, with an audible prompt to let you know what you should be expecting for the next pad. Do this just right and you’ll be able to very quickly navigate across the map. Using these pads, quick traversal is like its own mini-game. Once you get the hang of it, bouncing around like this is quite fun.

A timed boost replaces the typical shooter’s constant running button in Chroma, so those used to quick movement may feel a big bogged down by the switch. But movement feels pretty slow in general. Mastering the jump pads helps to move faster, but you’re not able to defend or fire back while bouncing between pads. 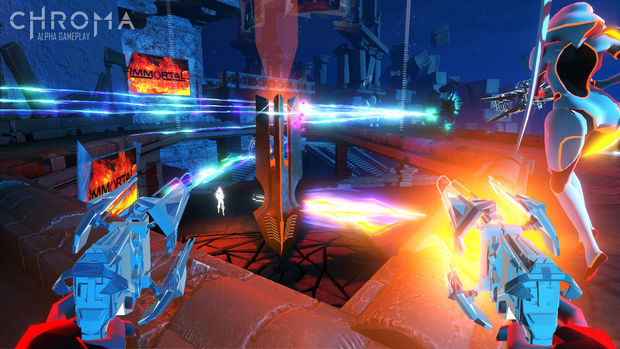 The play style is locked to the music, so much so that being on top of the beat seems to matter more than aim accuracy. For example, for the tank class, mastering clicking on the beat lets you get much more than one hit out of their rocket launcher as proper input allows the shot to angle onto another target continually. Getting the beat right also helps with the sniper class; a shot turns into a one-hit kill if it happens on the beat. The pistol also gets a strength boost with on-beat firing.

The combination of shooting and beat matching is a great idea, but having to run down an enemy, aim at it, and shoot at it on a beat is a lot to wrap your head around. I found that trying to line this all up in my head was pretty challenging. I’ve never been great at aiming, so I liked the idea that having skilled shooter players held back by the rhythmic requirements might level out the field a bit. But it’s not clear if it really works out that way. I don’t know that these skilled players would look at the situation as favorably, and those bad at keeping a beat or making a shot may feel even worse about the whole thing.

The way shooting and music comes together in play starts to make sense after awhile, but it does take a bit of experimentation to get a feel for all of these classes and their respective weapons. There’s a lot to learn across the five classes, and with each being so different, the required time to scale this learning curve could hurt Chroma‘s accessibility. This game will need a really good tutorial. 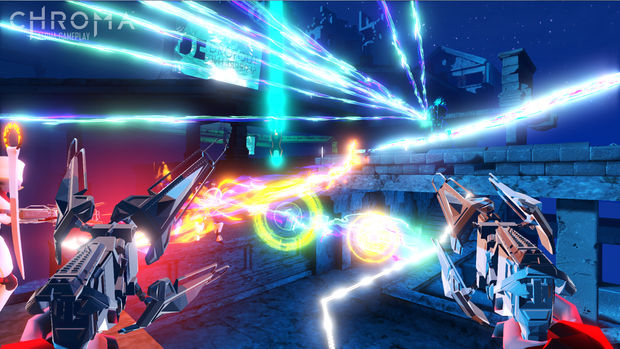 But what if you’re not that musical? It’s still early, so Harmonix has room to play with the balance, but I feel like those having a hard time keeping the beat will have a hard time enjoying this game. The maps we played were full of visual indicators to give you a feel for the beat, so much so that it seemed like it would be pretty difficult to lose a song’s downbeat. But, just like with aiming in a shooter, not everyone has a good sense of rhythm.

Even with my good music sense, I was having a hard time with this early build ofChroma. Other than the timed jumping and maybe the on-beat reloading, none of the musical elements seemed to click for me. The experience was rough overall, from the movement to the beat-timed firing. Even with a full hands-on session I felt like we were only seeing the beginning of a neat idea that hadn’t come together yet. 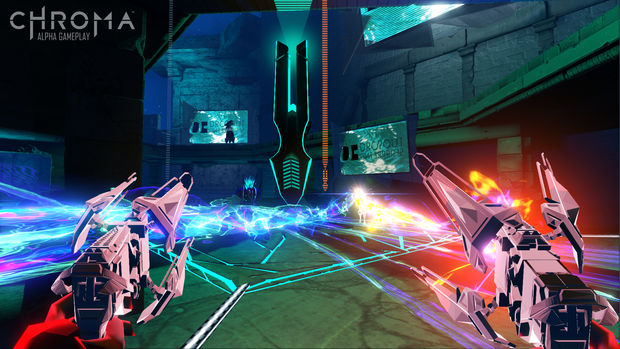 With five different classes and a variety of load outs, there’s plenty of room for players to get in and find a combination that fits their preferred play style. But who is Chroma for? Gamers that like rhythmical challenges could find the movement and aiming to be too much to take on at once. And shooter fans are going to have to approach this with a pretty open mind to be fine with beat-timed requirements for their shots and reloads.

As for the free-to-play aspect, details are light on monetization, but Harmonix does stress that Chroma will not be a pay-to-win type situation.

I love that Harmonix was willing to take on such an ambitious combination, but they’re really going to have to focus and fine tune the experience to make it as accessible and balanced as possible. If they figure it out, Chroma could be a truly unique experience.