Last month, The Happytime Murders opened to a pretty tepid response, both critically and financially. Having a budget of $40 million, not including advertising, so far the movie has only made half of that back and it’s been out for well over three weeks. To make matters even worse, one of those weekends was Labor Day weekend, which usually means an extra day or two for improved box office totals since most people are off work. It placed eighth for the overall weekend. Forperspective,Mission Impossible: Fallout, a movie released at the end of July, placed in third.

Why did The Happytime Murdersbomb? And let’s not mince words here, the movie is a catastrophicbomb. Why couldn’t it get more audiences into theatres? If I was to hazard a guess, the reason is two-fold. One, the reviews destroyed any chance of an average person going to see it. It currently holds a 23 percent on Rotten Tomatoes, and while I personally think the movie isn’t that bad, Rotten Tomatoes does hold a lot of weight for some people when deciding on what movie to see. The other reason, and the one that is more interesting to look at, is that the comedies studios are putting into theatres just aren’t funny at all.

Comedy is one of the most, if not the most, subjective forms of entertainmentI can think of. If you tell two people the same joke at the same time and place, one of them might piss themselves laughing but the other might just let out a chuckle cause they’re being polite. What we find funny is entirely determined by our upbringing, culture, and the people we interact with on a daily basis, and that’s just naming a few factors. However, it seems alarming that most of the movies that labeled themselves as “comedies” this year miss the mark completely. Why is that? Well first, what do Americans find funny? And yes, I’m saying Americans because Hollywood comedies are made for Americans and American sensibilities. So how are American jokes structured?

American humor is actually very different from humor in other parts of the world. Look at the differences between comedies in the U.S. and the U.K. Both are English speaking countries, but British humor is more focused on having normal people placed in bizarre situations. Edgar Wright’s Cornetto trilogy, which consists of Shaun of the Dead, Hot Fuzz, and The World’s Endall feature Simon Pegg as an average guy that has to deal with crazy circumstances. Whether it’s an alien invasion or a zombie apocalypse, it never seems like it’s too out of place in his world. The biggest dilemma he faces in Shaun of the Dead is deciding which records to throw at the zombies that want to eat his brains. He wants to live, but he couldn’t possibly throw away “Hip Hop Be-Bop.” That’s funny.

American humor is usually the opposite. Yes, characters usually have to deal with unnatural events, but the humor is more focused on the characters than the setting. The characters are the source of the jokes and constantly react to the escalating circumstances. Anchorman: The Legend of Ron Burgundy isn’t funny because Ron is navigating the insane world of San Diego’s mass media empire, it’s because Ron and his friends are over-the-top man babies that get into gang wars and break out into Accapella solos. There are a few exceptions, but typically the characters are the source of the comedy in American movies and TV. 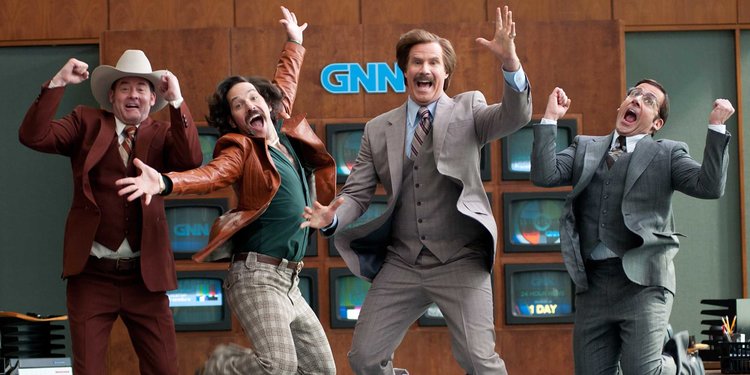 American studios also tend to cast good comedians as the central characters in their comedies. Say what you will about the 2016 reboot of Ghostbusters, but the casting choices were not the reason the movie failed. The majority of the cast were Saturday Night Live members and all of them were funny in their own ways. Kate McKinnon is hilarious on SNL, same as Leslie Jones, and while I think that Kristen Wiig has more misses than hits, her time on SNL was good to her. Celebrities like Will Ferrel, Chris Rock, Eddie Murphy, Tina Fey, Amy Poehler, Chris Farley, Jon Belushi, and Maya Rudolph all had great careers after getting their start on SNL simply because they played funny people and had good delivery.

But here’s the kicker. You can have a fantastic cast and have a great lead actor, but if your script is terrible, then your movie is going to suffer. Writing a good joke takes time and effort. You need to know how to tell it properly, how much setup you should have, when to get to the punchline, and how long you should hold before continuing. It’s all in the moment. You can ask any performer how they were able to get an audience to laugh at a joke and the best they can do is shrug their shoulders and admit they don’t know how they got people to laugh, they just did. It’s an art, not a science.

But when making a Hollywood movie, you have all of the opportunities to perfect a joke. You can tell a single joke in multiple takes. You can deliver the joke in a variety of ways. You can edit it to hell and back after production is done. You can even film multiple versions of the joke and test screen it with different audiences to see how they react to it. But if the joke isn’t funny to begin with, none of it will matter in the slightest. 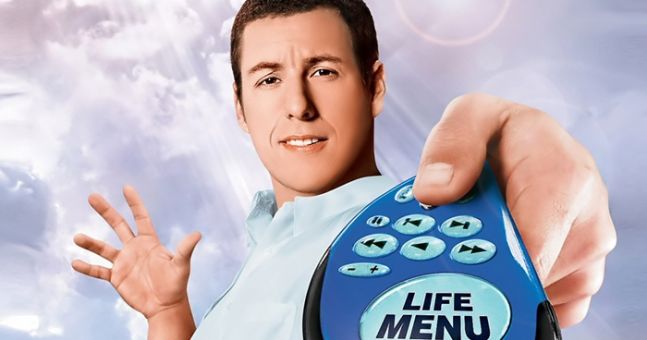 And so, as is often the case with comedy, let’s talk about Adam Sandler.

Look… I get why people like Adam Sandler. He’s a funny comic and has some classic bits that still hold up today. His “Hanukkah” song is phenomenal and some of his movies like Billy Madison, Happy Gilmore, and 50 First Dates hold up extremely well today. However, most of his modern movies range from being passable to outright trash. Jack and Jill, That’s My Boy, The Ridiculous Six, The Do-Over, and Pixels are all terrible movies that are bad movies for a variety of reasons, but the biggest complaint is usually that they’re poorly written. Basic joke structures are overlooked and substituted by Adam Sandler doing a funny voice, or maybe he’s yelling, or maybe there’s a piss joke in there. The joke lies in the gimmick that Adam Sandler is telling a joke and not because it’s actually funny.

And you can really make the case that a lot of the bad comedies that come out today over-rely on gimmicks. Funny comics may be cast in your movie, but they’re not given a chance to be funny because the movie they’re in is based on an unfunny gimmick.Uncle Drew is a movie about old basketball players showing that they can still play basketball. All of those old basketball players are played by former NBA stars, but what’s the joke? That the old people are actually NBA players in age makeup? Yeah… so? Why is that funny? Is it because old people shouldn’t physically be able to play basketball, but they’re able to do so in the movie? Yeah, that’s the gimmick, but what does the movie do with it besides acknowledging it?

The same goes for The Happytime Murders. It’s a detective noir with puppets. Cool! Sounds fun! But what does the movie actually do with it? Short answer, nothing. A few jokes are structured around the gimmick that most of the cast are puppets, but the majority of jokes could have easily been done if the puppets were humans. The joke is the premise, and if you don’t like the premise, then your movie sinks. Even then, if you have only one central gag in your entire movie, then it’s going to run out of steam by the end.

But badly written comedies are nothing new. Hell, they’ve been a constant for as long as movies have existed. No matter what year or decade it is, bad comedies will always find a way to wiggle their ways into theatres and underwhelm audiences. It’s sad to say this, but fantastic comedies have, and always will be, rare. For every Zoolanderor Blazing Saddles, we’ll have a hundred Bio-Domes or Alvin and the Chipmunks. Those bad comedies are still built on terrible writing, usually catering to pop culture trends that date the movie as soon as they’re released. We’ve thankfully steered away from movies whose humor relied solely on pop culture references, but ho-hum comedies still seem expected today.

So where have all of the good comedies gone? They’ve never left! Good comedies still exist, but they’re more focused on making a point and getting a message across than ever before. Nearly all of the best comedies today have an ax to grind against someone or something and by God, they’re going to make you laugh and face those issues directly. Both Sorry to Bother You and Eighth Grade are labeled and advertised as comedies, and in truth, they’re some of the funniest movies I’ve seen all year as well as some of the most thought-provoking.

But if you think that those movies are too “niche” or that those are movies that only film snobs and critics go to see, then just look at the MCU. While its movies aren’t labeled as straight-up comedies, every Marvel movie features a healthy amount of jokes and levity. People have criticized Marvel for its brand of humor, but the jokes are still there. It’s just the humor isn’t as big of a priority as the action or the continuity.

Most movies that market themselves today as comedies aren’t that great. I think it’s going to be a while until we have another all-time comedy classic hit theatres that everyone falls in love with. Writers are much more prone to copping out with gimmicks than actually develop scripts and jokes that stand the test of time. If you’ve been jonesing for laughs, then go check out Netflix. Most successful stand-up comics have exclusive deals with Netflix to stream their comedy specials and Netflix has an undeniable stranglehold on the market. Comics like Dave Chappelle, Bo Burnam, Ali Wong, and Hannah Gadsby all have fantastic Netflix specials that have some of the funniest jokes I’ve seen in years and I saw them all on my laptop. Not in theatres.

The talent is there. There will always be amazing comics ready to tell jokes and make people laugh one way or another. What Hollywood needs to do is let these talents tell their own jokes and not just improv their way through clumsy joke after clumsy joke. Don’t let 13 writers come together to write a funny script. Trust the comedians to be funny. That’s what they’ve spent most of their life doing. Don’t rely on gimmicks to get audiences into theatres. If a movie is funny, people will hear about it and want to go see it. Word of mouth has worked wonders for the stand-up comedy specials on Netflix, so let it work for big budgeted movies.

Don’t play it safe. Be a little risky. Comedies don’t need to have a multi-million dollar budget. Keep it small, keep it insular, and keep it focused. If you do all of that, I can guarantee that people will start paying more attention when comedies make their way to the big screen.