Bring a blanket or something

Grab your sword and hit the road in today’s contest for a physical PS4 copy ofThe Legend of Heroes: Trails of Cold Steel III!

Do they still have war schools/academies somewhere? I don’t think we really have any like the ones video games seem to think we do. I could be wrong, but man there’s always drama with these things! I figured if nothing else there’d be less interpersonal drama at war schools.

Alas, war never changes — and neither does school. Get into both with a physical PS4 copy ofThe Legend of Heroes: Trails of Cold Steel III Early Enrollment Edition, and protect your country while also running a school!

My mom grounded me from writing about video games on the internet, so I’ll have to let the devs tell you about this one.

Nearly a year and a half has passed since the Erebonian civil war, and much has changed since then. From the shifting stances of countries to the internal politics of the Empire, and even the life of Rean Schwarzer, the shadows of the past have given way to the embers of a new chapter. Now graduated from Thors Military Academy, Rean has become an instructor at the Thors Branch Campus, a newly-opened academy that quickly finds itself thrust onto the national stage. It is here that he takes the lead of a brand new Class VII, and must guide a new generation of heroes into an unknown future. Though all is calm now, the nefarious Ouroboros organization continues to weave a dark plot that could engulf the entire continent in war…or perhaps something even more sinister.

Trails of Cold Steel III invites players into a world full of intrigue and excitement that is years in the making. They will embark on a whirlwind tour through the never-before-seen lands of the recently expanded Erebonian countryside, and encounter fresh faces as well as old friends familiar to fans of the series. In true Trails fashion, the deep, engaging story pairs with an incredible cast of characters and a combat system refined over decades of innovative RPG worldbuilding. This renowned title has also now been developed natively for PlayStation 4 hardware, a series first.

So, check out what we’re giving away! 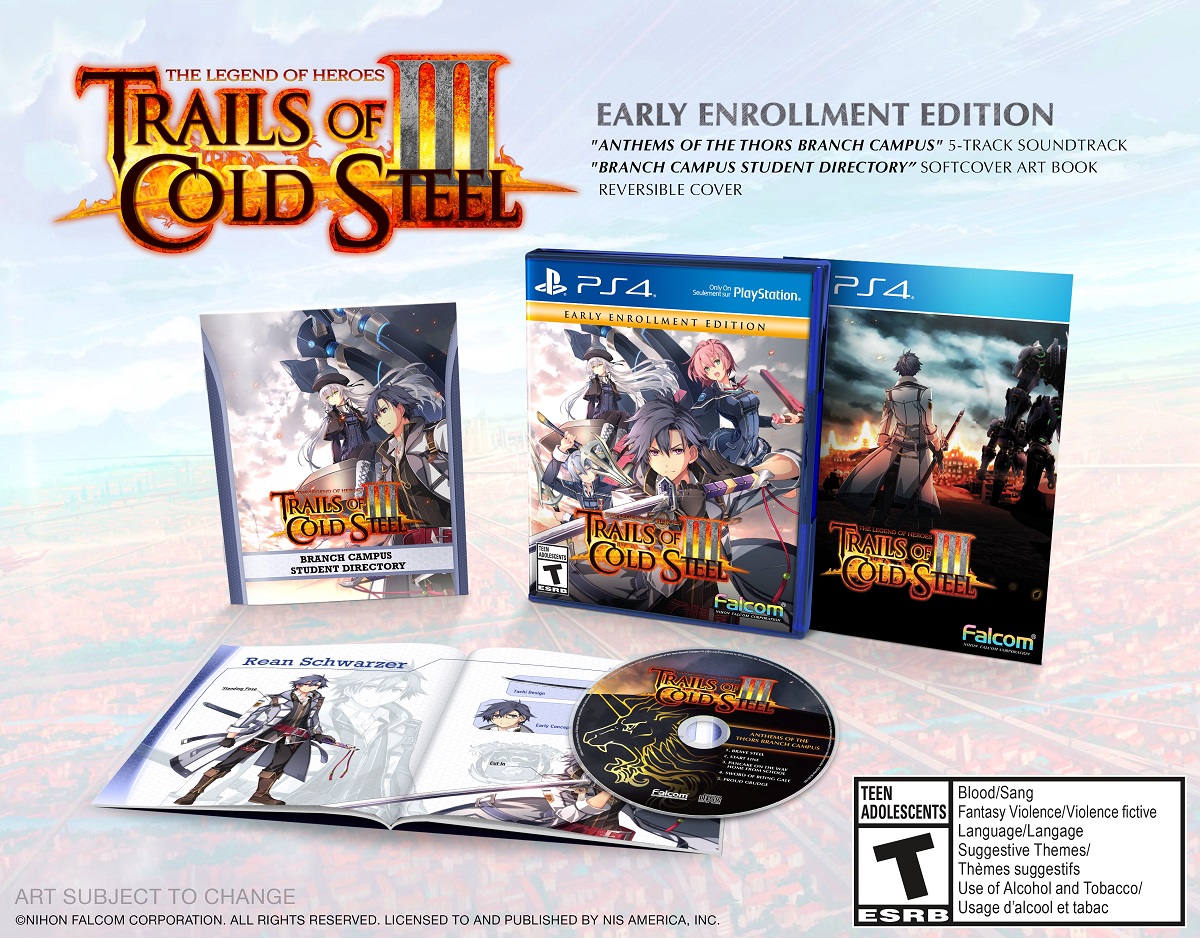 The Early Enrollment Edition comes with the game, artbook, and soundtrack so you can enjoy all the sights and sounds the game has to offer.

To enter to win, use the widget below to leave your name and email address. You can enter daily for additional chances to win. For bonus entries, follow Dtoid and NIS America on Twitter and share our contest post with your friends.

While you’re waiting, tell us why there’s always so much drama at school. It seems like every time there’s any depiction of school, there’s also tons and tons of drama going on. What’s up with that? Why do we like drama so much? Let’s just relax a minute, y’all.

We have two physical PS4 copies of the game to give away; you must have a United States shipping address in order to qualify. Winners will be drawn Friday, October 18. Head over to our sister site, PlayStation Enthusiast, for more chances to win a copy!

The Legend of Heroes: Trails of Cold Steel III launches October 22, 2019. You can preorder your copy today!

Dtoid Contest: Hit the road with a physical PS4 copy of Trails of Cold Steel III