What’s your CPS? That question is a litmus test, and if you have no idea what it means, good. You’re safe. I envy you. I’m not as fortunate. I, like a whole bunch of other people, fell prey to the recent Internet phenomenon, Cookie Clicker, and things just aren’t the same anymore. By the way, my CPS is 1.8 billion, as if any of it really matters.

CPS, or Cookies per Second for the uninitiated, is the statistic that’s at the heart of Cookie Clicker. Ask anyone that plays, and they’ll be able to ballpark their most recent figure. Their answer is unimportant. What is important is the fact that regardless of progression, their response will almost always come with a twinge of pride and accomplishment.

That’s because we’re not just baking cookies here; we’re building empires. And if Cookie Clickerdoes one thing extremely well, it’s giving the player a constant pat on the back, assuring them at every step of the way that their cookie kingdom is growing. Likewise, the next big breakthrough is always right around the corner. Always. 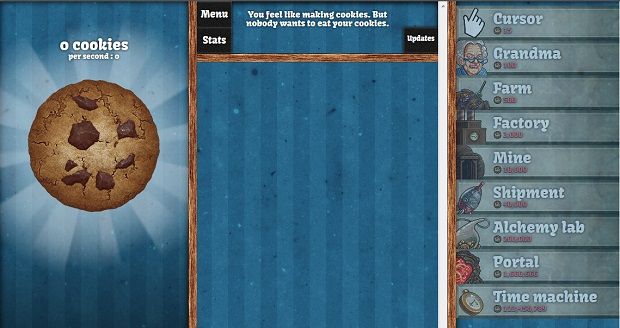 What starts as an exercise in manual dexterity quickly turns to something far more fulfilling. As that giant cookie’s been clicked enough times to buy a few upgrades, you don’t have to do the work anymore; you have people for that. Things are streamlined. Each new purchase may temporarily bankrupt you, but who cares? Watching your CPS increase is the main attraction. You’re thinking long-term, like any good visionary. Rome wasn’t built in a day, after all.

Okay, it’s just floating there in the left-hand margin like some sort of gift from the patron saint of baked goods. Maybe you’ll click it a few times. It’s not necessary, but, you know, just for good measure. Of course you will.

Before you know it, the entire game is defined by the number of commas you see. 1,000 cookies? That was exciting for a while, until you hit a million cookies. Then, it’s “A million cookies isn’t cool. You know what’s cool? A billion cookies.” Alright, Justin Timberlake, get out of my brain now. 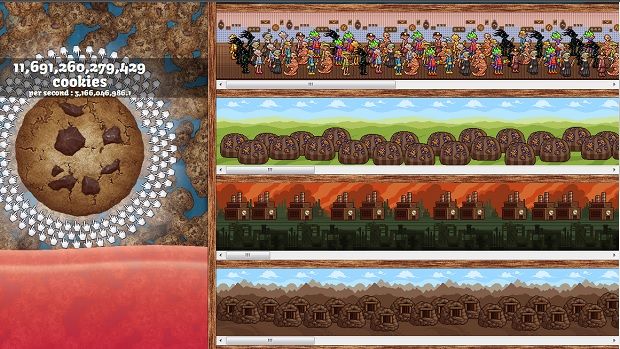 Knowing Cookie Clicker‘s tricks doesn’t make it any easier to avoid. There’s still a very persistent urge to let it remain in your life. Is it because you’ve already made an investment of time? Is it because it’s so damn fun that you just need to keep playing? No, it’s because you’re greedy andCookie Clickerexploits that.

The single most identifiable mindset that Cookie Clickerencourages is “more, more, more.” The entire game is centered around the pursuit and accumulation of vast wealth, and it doesn’t taint that with any sort of semblance of a clearly-defined, ultimate goal. Sure, you can choose to prestige, but that decision’s driven by the promise of a bonus to your CPS on the next run. The inclusion of dungeons are also forthcoming in a future update which will certainly vary gameplay, but ultimately feeds right back into the same cyclical mentality.

As your sense of industrial tycoonery increases, the assets that were once vital to your operation become virtually meaningless. Who needs grandmas and farms anymore when they now contribute only a slight fraction to the overall cause? Your resources are obviously best spent elsewhere.

Eventually, Cookie Clickergoes so far as to blatantly call out your greed, knowing full-well that anyone that’s cognizant still won’t change their ways. It’s right. The quest for riches undeniably alters your judgment, as you become willing to disregard the most outward of warnings for even the most incredibly minimal of returns. More is better, right?

All of this only serves as a minor distraction, a cause for pause. A moment of reflection before guiltlessly diving back in. Ethically intriguing or not, there’s a fortune to amass. I’m aware that I’m just as prone to it as everyone else. Maybe more so. In the time it took to write this, my CPS jumped to 3.1 billion — again, as if any of it really matters. Strangely, somehow it feels as if it does.