Not quite stealthy, but still fun

In a recent hands-on with Splinter Cell: Blacklist, I had a chance to see exactly what our other editors have been excited about regarding both the game’s single- and multiplayer components. I spent a little time with a couple of single-player missions set primarily in the Middle East in broad daylight, and then jumped into a few Spies vs. Mercs rounds in a Hacker’s Den before finishing out with a co-op mission with another journalist through Eastern Iraq.

Much of what I played was familiar territory in regards to gameplay conceits of both the series and of similar games in the genre, and the Spies vs. Mercs mode remains as strong as ever, but the mission I actually came away the most impressed with was the one spent with a complete stranger that had us both working together to complete a number of objectives.

Though the co-op missions don’t demand the precise stealth of earlier titles, they are still incredibly fun and actually do require some tactical skills. 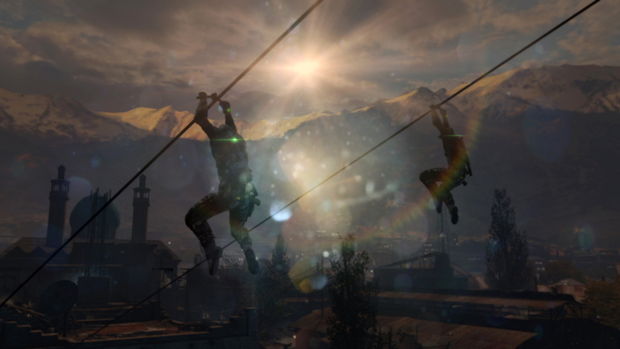 A group of monitors at Ubisoft’s Splinter Cell: Blacklist event were set aside specifically for co-op missions, and as a PR rep pointed me and another random journalist towards opposing monitors, we ‘suited up’ with our headphones, tested our audio connection, and jumped into the game proper. We had never met before, and now we were to rely on each other’s judgements to make it through the mission. Cue immediate anxiety about screwing up and pissing off my teammate, or vice versa.

The game started in Mirawa Iraq, and I played as a supporting agent (I believe it was Isaac Briggs, but without any real investment in the character it could’ve just as easily been Charlie Cole, whose missions revolve around assault tactics) while my co-op partner played as Sam Fisher. We began at the top of a precarious mountain trail leading towards a small outpost and a bridge, tasked with taking out the bridge with C4 after clearing the outpost of hostiles. 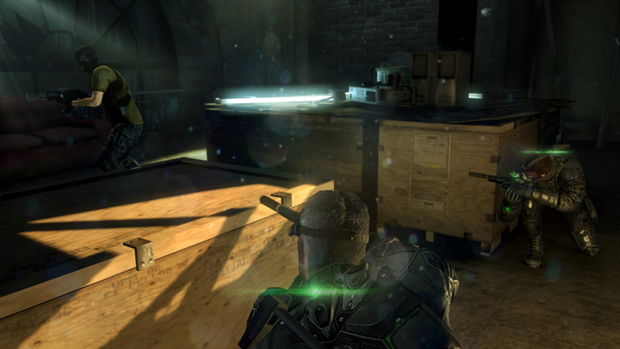 What immediately became apparent about the co-op missions is that stealth is still pretty necessary, although not to the point of frustration. At one point, as I aimed my gun over a fallen tree to get a clean shot on an enemy — I somehow misfired, alerting everyone in my area.

“Oh. Shit,” I spoke over the headset. “We’re probably screwed. I alerted them.”

“I got it,” my co-op partner said, and then as I became the perfect decoy, I watched him take down each surrounding enemy one by one, until I could dispatch the last couple near me. A few kills later, and a guy with a riot shield appeared from nowhere and began trudging towards my partner. I took the opportunity to sneak around and snap the guy’s neck. 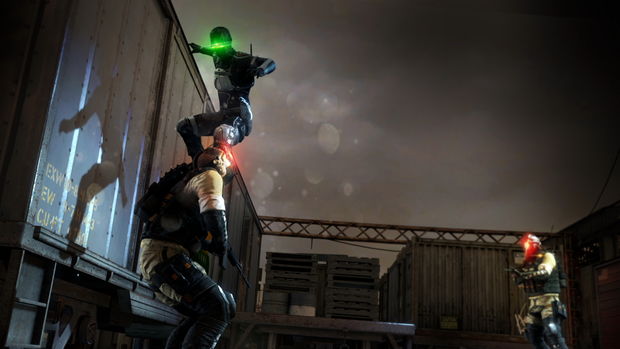 This scenario actually replayed itself a couple of times throughout the mission, with our roles reserving each time. After we took down the bridge by planting the C4 on the trucks parked on it, we began heading to a village filled with snipers, and each of us took different routes to distract our enemies. My co-op buddy soon got overwhelmed and cornered from within the village, and I took the opportunity to become Rambo Sam Fisher, blasting enemies from above the rooftops, before slinking off into the shadows to stealth kill the last couple that were giving him trouble.

Curiously, the next large segment of this mission became a lot less focused on stealth, even as day turned to night. While one of us was tasked with making our way through a heavily guarded segment of the village, the other was required to support with UAV drone bombings from above. This segment absolutely required one partner to mark enemies for execution, as not all enemies appeared in the UAV radar, and several heavies in the area needed priority marking for a nice bomb blast to deter them. After getting halfway through this area, the roles switched so that each player got a turn at either support or making way through the village.

While this area was a lot of fun, it played a lot more like an entirely different Tom Clancy game — Ghost Recon: Future Soldier, to be exact. While other editors have mentioned the homogenization of genres that Ubisoft seems to be going for in this latest Splinter Cell game, nowhere has it been more apparent than in this particular section that really had little to do with stealth and everything to do with tactical bombing strikes. 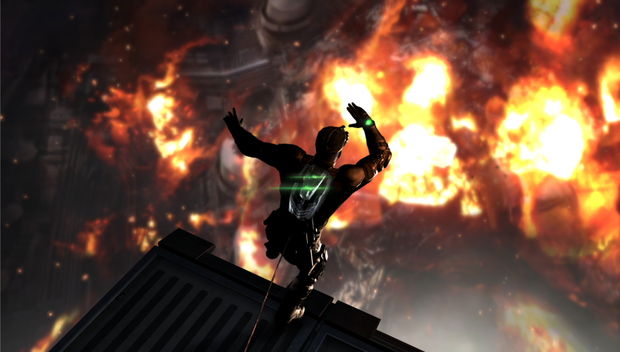 Soon after this portion of the level, our mission ended and unsurprisingly our approach was deemed primarily ‘assault’ by the endgame stats meter. My co-op buddy and I congratulated each other on a job well done and wandered off our separate ways. I have to give it to Ubisoft for making co-op accessible and fun enough that two strangers could become strong teammates without either getting overly frustrated at the other’s incompetence. While the gameplay may not be the approach to stealth that diehard fans expect out of the series, it’s still solid and enjoyable enough on its own merits to be worth a look.

Oh, and if you’re not a fan of co-op but still want multiplayer in your Splinter Cell, at least Spies vs. Mercenaries is still as tense as ever. I played a couple rounds as both the Spies and Mercs, and found myself dying a ton because of my lack of stealth ability and/or aiming my weapon against my foes. So there’s that.