Cleopatra Jones and the Funky Bunch

What happened to the style and cleverness that came from heist thrillers? I remember watching films like Ocean’s Eleven and Thief, that had little to no action or shooting. But now, these high-pressure and tense moments just seem like over the top spectacles. Due to the success of Grand Theft Auto and Pay Day building entire gameplay scenarios around such high-pressure and intense moments, it’s likely that ‘heist’ is now synonymous with shooting and explosions.

But what about the methodical and low-key approach to pulling off such crazy scores? Well, that’s what the developers at Skilltree Studios have in mind for their take on pulling off big scores. With Crookz, they seek to take a different approach to heist gameplay, while doing it in authentic and funky 70’s style.

Set in the 1970s, Crookz places you in charge of a group of thieves, grifters, burglars, and other sneaky individuals in order to break into secure locations that house loot and other treasures. As the trailer suggests, the people you’re robbing are sleazy and shady folk that certainly have whats coming to them, and it’s your job to ensure the cash moves from their pockets to yours. With each successful score, you expand your arsenal of gadgets and crew members, while taking on increasingly more difficult jobs that will test your skills as a pro robber.

While most games follows the more action oriented approach to heists, Crookz takes a very different stab at it by turning it into a quasi puzzle-strategy experience. Instead of getting into massive shootouts and high-speed chances, seeking to emulate the infamous bank heist scene from Heat, you’ll have to plan each move step-by-step and utilize your crew’s strengths and weaknesses to covertly break into secure locations and procure valuable items and intel.

Similar to a real-time-strategy experience, you can move your characters to specific points on the map, while using their abilities on the fly as you evade guards and avoid alarms. During our demo, we were taking part in a score at a private mansion, and it was loaded with guards and other traps. While it looked daunting at first, it was readily apparent what was required for the score. For every heist, you’ll need the right people for the job. 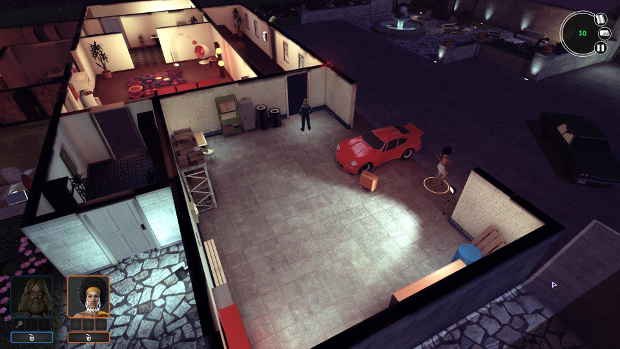 Before each mission, you can outfit them with various gadgets and augment their skills to facilitate the needs of the heist. With several characters classes, such as Runner, Tough Guy, Locksmith, Hacker, and of course Robot — you’ll have to learn the lay of the land and get a read on things to succeed. For the mansion job, the runner, tough guy, and locksmith were able to break into the site with ease and take out guards while making it to the loot.

If you’re unsure of what you need to do, you can take your time and go through each step to figure out the best course of action. But if you’re an especially clever planner, than you can meticulously analysis the layout of the environment, guard routes, and security systems to plan out your heist step by step. If done right, you can watch as your crew methodically and expertly tackles the score as if you were witnessing a Rube Goldberg Machine at work with the style and grace of Ocean’s Eleven. 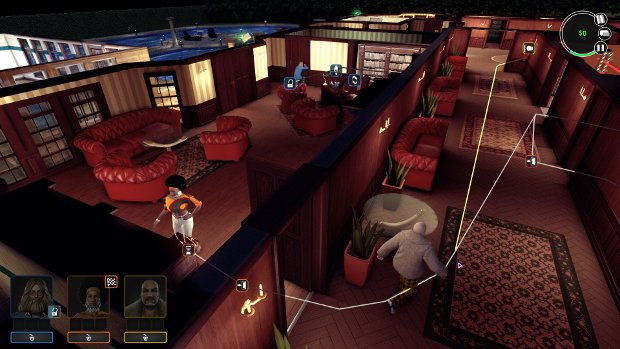 I found the style and presentation to Crookz to be very refreshing for the heist genre. The music and atmosphere evokes the hip and energetic style of caper films from the 1970s. The music in particular is very much exciting and smooth, the themes throughout the heists pull from influential period films such as Shaft or Deep Throat. In any event, it works well. Ithas style and swagger in spades, and it feels exciting to play through a heist game that manages to not take itself too seriously, while still looking cool as you pull off the score.

Set for release Q2 2015, Crookz is very interesting blend of puzzle and strategy elements sent across the backdrop of 1970s heist thrillers. I’m quite the fan of the era, and the style it evokes is very refreshing to see. With over 20 different mission and some online challenges to tackle, it’s very rare to see heist game like this, and I’m very much looking forward to checking more.