Cuphead's DLC has been delayed yet again

Here’s a development that won’t shock many people, and probably would’ve been completely missed had the creator not provided an update: Cuphead‘s The Delicious Last Courseexpansion won’t launch in 2020 as previously planned.

Now, eleven-twelfths of the way through 2020 and without any recent roadmap to guide us, everyone had passively assumed Cuphead‘s DLC wasn’t going to show up this year. Studio MDHR made it official by posting this on social media: 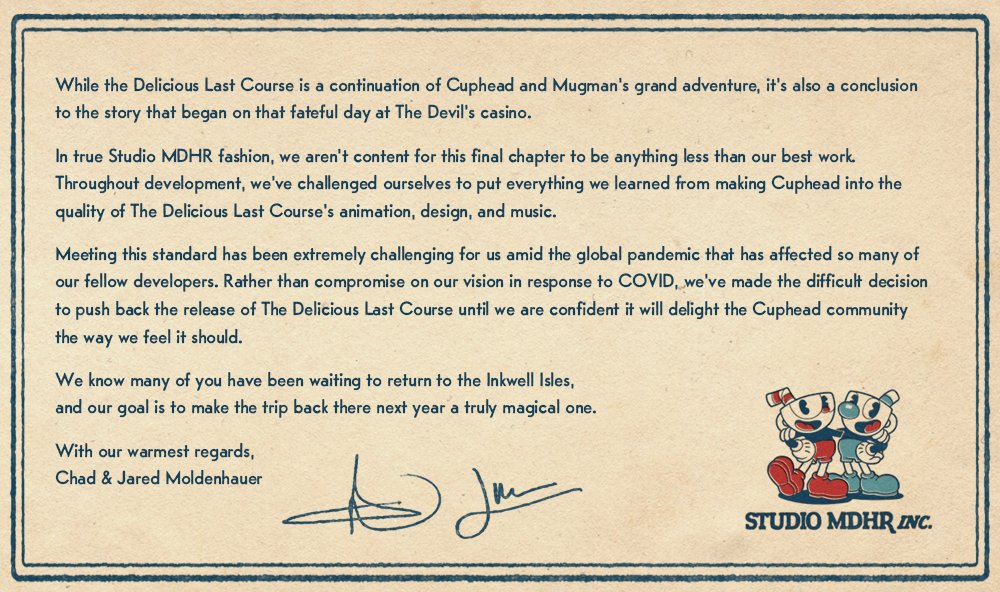 The last we had heard, Studio MDHR delayed The Delicious Last Coursefrom 2019 and into 2020. The pandemic is the chief culprit for this postponement, but an even better reason might be that Cupheadhas just always been developed at its own pace. It takes a long time to create and that’s the history of Cuphead.

We’re left to assume that 2021 is the new target release date for The Delicious Last Course. Either it’ll be ready next year and we’re given a more narrow launch window, or it won’t and we’ll have to look toward 2022. Cupheadoperates on its own schedule, and that formula worked wonders the first time ’round. No one expects Studio MDHR to rush the expansion out the door until it’s 100 percent perfectly refined.