And a whole lot less zany despite massive blood spurts

As Jim reported, Dead Rising 3 is being aimed to appeal to Call of Duty fans. It showed in the hands-off demo shown here at E3. The theme of the presentation was the partnership with Microsoft in bringing Dead Rising 3 exclusively to the Xbox One and how the technical capabilities of the Xbox One allowed the team to take Dead Rising 3 “in a more mature, sophisticated direction,” which seems like the last thing it needed or fans wanted.

There were other Xbox One exclusive capabilities touted as well, like Smart Glass integration that allows you to search the game’s fully open world for gun shops and set way points without having to pull a map up on screen. Smart Glass was also used to call in a drone strike and, later, a block leveling explosive airstrike. 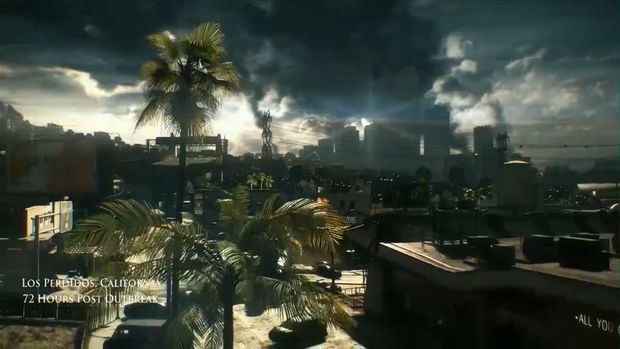 Dead Rising 3 (Xbox One) Developer: Capcom Vancouver Publisher: Capcom Release: November 2013Dead Rising 3 puts you in the shoes of mechanic Nick Ramos who has a penchant for kicking doors open and grunting. He apparently has a :mysterious past.” Haha. The game has evolved to an open world affair. We were shown one of the four districts, which in and of itself was fairly large and varied, including its own Chinatown and a cemetery Ramos desecrated while driving a hearse. Better still, there are no load times.

About three times more zombies can be on screen at a given moment than in Dead Rising 2, letting the game feel well packed with zombies, which can sometimes obscure entire streets. There’s also a focus on the zombie horde mentality in which one zombie spotting you will alert others in the area to your presence. Similarly, you use light and sound to lure them away from you. In the demo we were shown, a flaregun proved quite useful in that task.

Ramos spent the demo shooting between random locales, picking up blueprints and building different weapons. Combat feels a bit less comical than in the previous, more brightly colored games in the series, and Ramos’ personality thus far is bland, full of canned “oh crap”s and “that was close”s. 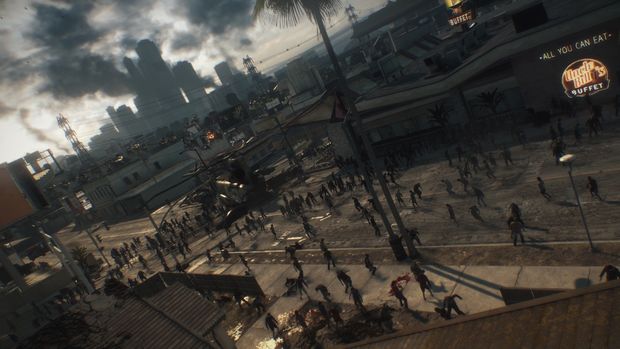 Of course, it does look like Dead Rising when he combined a sword and a gas can to make a flaming sword, but somehow that sort of experimenting seems more an excuse to earn extra Prestige Points (make your own Call of Duty connection here), the game’s experience, to facilitate the upgrade system. There are also perks that can be equipped that come in the form of collectible books.

Any weapons or costume found and used in the game can be accessed at any point in one of many safe houses found throughout the map. In one of these lockers Ramos picked out an amazing shark outfit that was, bar none, the highlight of the demo, because it was practically the only legitimately novel thing aside from eating a hotdog and a beer off a shelf to restore health.

One segment that took place in a sewer felt much more at home in Resident Evil. It was dark, creepier, and accordingly seemed to insist on the use of a handgun with a flashlight taped on, basically turning the game into a third-person quasi horror shooter, though I suppose you could flail around in the dark with a sledgehammer if you tried hard enough. Maybe the flaming sword could provide enough light. 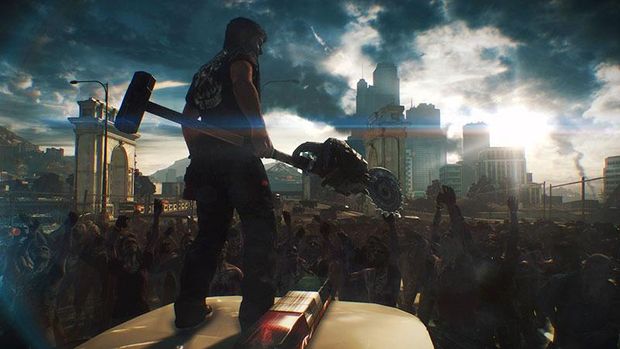 The tone of the game is markedly different, anyway. During one skill execution Ramos stuck his fingers in a zombies eyes and, after several gruesome seconds of effort, ripped half of its head off. The camera zoomed in to this, it was exceptionally bloody and featured appropriately icky sound effects.

At one point, a mysterious, apparently familiar voice reached Ramos over some sort of communication system and informed him there was someone in trouble nearby lighting off fireworks, at which point Ramos kicked into action to save him. It seems like randomly generated events are likely for this open world game. I’m still not sure why he’s running around busting heads for fun in a zombie apocalypse while everyone else cowers, though. I guess it’s because he can.

Combat is, at its core, Dead Rising. You have fun and kill zombies with a combination of typical and atypical weaponry. The open world and larger and larger zombie hordes seems like an appropriate trajectory for the game. Still, the tone definitely feels off. The game, from what we were shown, is less colorful, both literally and figuratively. If it’s still Dead Rising in spirit, they’re being coy about it and thus far mostly presenting things fans of shooters really like. A lot more guns and airstrikes and perks and Prestige Points. Hopefully Dead Rising wackiness is still at its core. If not, you can just wear the shark suit for the entirety and pretend.