What happens in Vegas

For 50 years, the Consumer Electronics Show (CES) has shown off innovations and inventions, demonstrating how technology can be harnessed to improve our lives or just make things a little more fun. I got to check out the show on behalf of Destructoid this year to see what we can look forward to in gaming tech.

CES isn’t like some of the other conventions you might be familiar with, like E3 or PAX. Instead of focusing on gaming, anything electronic is fair game, from drones and 360-degree cameras to 3D printers and e-cigarettes. As a result, CES is enormous, completely engulfing the Las Vegas Convention Center and taking over the Venetian and Westgate hotels as well. It’s way too big for one person to cover, but I did manage to see a lot on the show floor. In no particular order, here are the four coolest game related things I saw at CES this year. Each of the winners was given one of the handsome plaques you can see in the header image.

Retro-Bithas been making hardware that’ll play your old game cartridges for years now, and you might’ve seen its Retro DuoorGen Xconsoles if you frequent independent game stores. The company was showing off several new products at CES, including a second series ofStubbinsplush dolls, andwood or plastic coffee tables with giant, functional buttons that you can plug into a console. The gentleman who was showing me around saved the best for last though, ending the tour of the booth in front of the Super Retro Boy portable console. 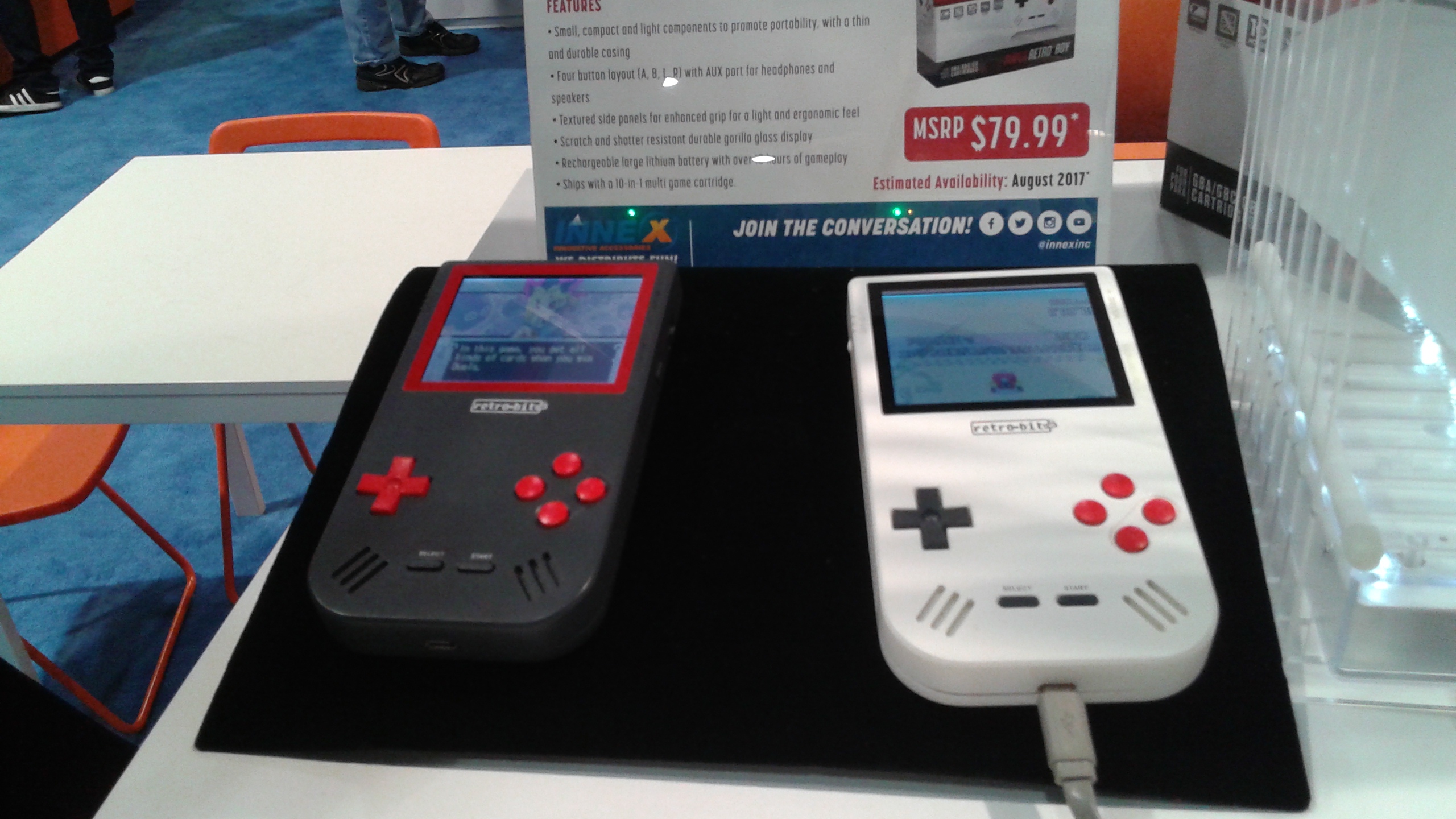 The Super Retro Boy is shaped like a vintage Nintendo Game Boy, and that’s no coincidence. The console has slots for original Game Boy and Game Boy Advance cartridges, and the ones on display were runningF-Zero: Maximum Velocityand aYu-Gi-OhCard game I’m not familiar with. The form factor is nearly identical to the original Game Boy, and should be a huge hit with portable game enthusiasts who still have their old cartridges. The new console has some advantages over the old systems, however. The screen is backlit, and the system has a 10-hour rechargeable lithium battery installed, so you’ll never have to mess with replacing AA batteries.

You may have noticed that the front of the console has four face buttons. The second set above the classic A and B replaces the shoulder buttons that were found on the GBA. I also noticed that the system doesn’t have any way to attach a link cable, which would make games likePokémonless enjoyable. When I asked about these issues, the representative let me know that the design hadn’t been finalized yet, and that the final version may have a link port, and might move or duplicate the shoulder buttons on the sides of the console.

I didn’t get to go hands-on with the Super Retro Boy, but from what I could see the games on display were running just as they would have on original hardware. If you don’t have any original Game Boy or GBA cartridges, the Super Retro Boy will come with a 10-in-one multicart to get you started. If you happen to own a working Game Boy, that multicart will play in your vintage hardware too.

Razer had a great showing at CES, and you might have already seen the story about its triple-screened gaming laptopcalled Project Valerie. I asked about this a little bit, and Razer confirmed you can use one, two, or all three screens simultaneously depending on your needs. The other future tech Razer had on display was its third-generation hardware for its Chroma ecosystem, codenamed Ariana.

Razer’s Chroma system is a little hard to describe if you haven’t seen it in action. Basically, it adds lighting effects to your gaming setup, so if you take damage, your keyboard and mouse might flash red. The second generation of Chroma opened this effect up to other developers and other accessories using the Chroma module. This tech allows programmers to integrate their hardware into the Chroma ecosystem, so if you’d like to have an array of lights surrounding you to indicate where enemy fire is coming from, you can. With the right setup, you can have flashes of light and color that enhance the ambiance of your game and help make it more immersive. This tech is already being built into products like PC cases from Lenovo and Antec, and even a desk with built-in lights from Lian Li.

The third generation of Chroma integrates the lights and colors from the first two generations with a projector, the Ariana. It reminded me a bit of Microsoft’s Illumiroom before I got to see how it worked for myself. Basically, Ariana extends the screen area to cover an entire wall, which provides the player with a vastly expanded field of view. Your focus remains on the small screen, but Ariana improves your peripheral vision significantly. Since it’s only a concept at this point, the only game supported so far is Shadow Warrior 2, though the Razer rep said the developers got it working with less than a week of development time.

I’ll be honest, I thought this was pretty silly when it was being described to me, but seeing it in motion was way cooler than it sounds. The lights surrounding the room added some extra kick to the on-screen explosions, and I could definitely see how having so much extra screen real estate on the wall could help keep foes from sneaking up on you.

Let’s start by saying that this one’s more for the PC enthusiasts out there. If you’ve ever built your own system, you know that keeping your rig cool is a big concern. Traditionally, there have been two ways to do this: either by installing fans to blow air over the components, or by setting up a water-cooling system to dissipate the heat. Both have drawbacks; fans are noisy, water coolers require specialized pumps and can be disastrous if the tubes spring a leak.

Calyosdecided that there must be another way to keep things cool in your tower, and came up with a third option. Its loopingheat pipe technologyis a closed system that is silent, has no moving parts, and is maintenance-free. It uses lightly pressurized refrigerant and a specialized heat sink to provide better cooling than a water system, without the need for a pump or condenser. The heat sink keeps water from condensing on the pipes, so there’s no risk of liquid getting into your system.

Currently, every cooling system the company makes is custom, but it should be possible to retrofit into an existing system eventually. While you can’t currently buy a self-install kit, the Calyos representatives I spoke to said they were working with ThermalTake to build a case that would have their cooling technology built in. If you’re in a hurry, you can buy one of their custom systems now, or wait a few months for the technology to become more widely available.

Samsung had a rough 2016, and the Galaxy Note 7 was a punching bag for comedians for most of the year. Despite that, Samsung was showing off quite a few items that could be of interest to gamers. Its booth included a new gaming laptop called the Odyssey, which used something Samsung calls “Dragon Scale” to keep the underside cool to the touch. There were several 4K monitors on display, including a stunning curved monitor with a resolution of 3440 x 1440 that you can buy right now if you’re willing to drop a grand on a single screen. The main focus, however, was on its next generation of 4K televisions, called QLED screens. The Q comes from what Samsung is calling Quantum dot technology, which it says can display 125% of the normal visible color spectrum, providing a significantly more vibrant picture than last year’s models.

While I can confirm that the picture quality on the new televisions was incredible, the feature that really drew me to the QLED sets is what Samsung is calling the Invisible Connection. This is a special fiber-optic cable that connects your QLED TV to whatever inputs you care to plug in. It hides the rat’s nest of cables and connections all gamers are familiar with, replacing it with a slim, nearly translucent cable about the diameter of a toothpick. I assume elves or leprechauns are involved in the manufacture, because this seems like magic. 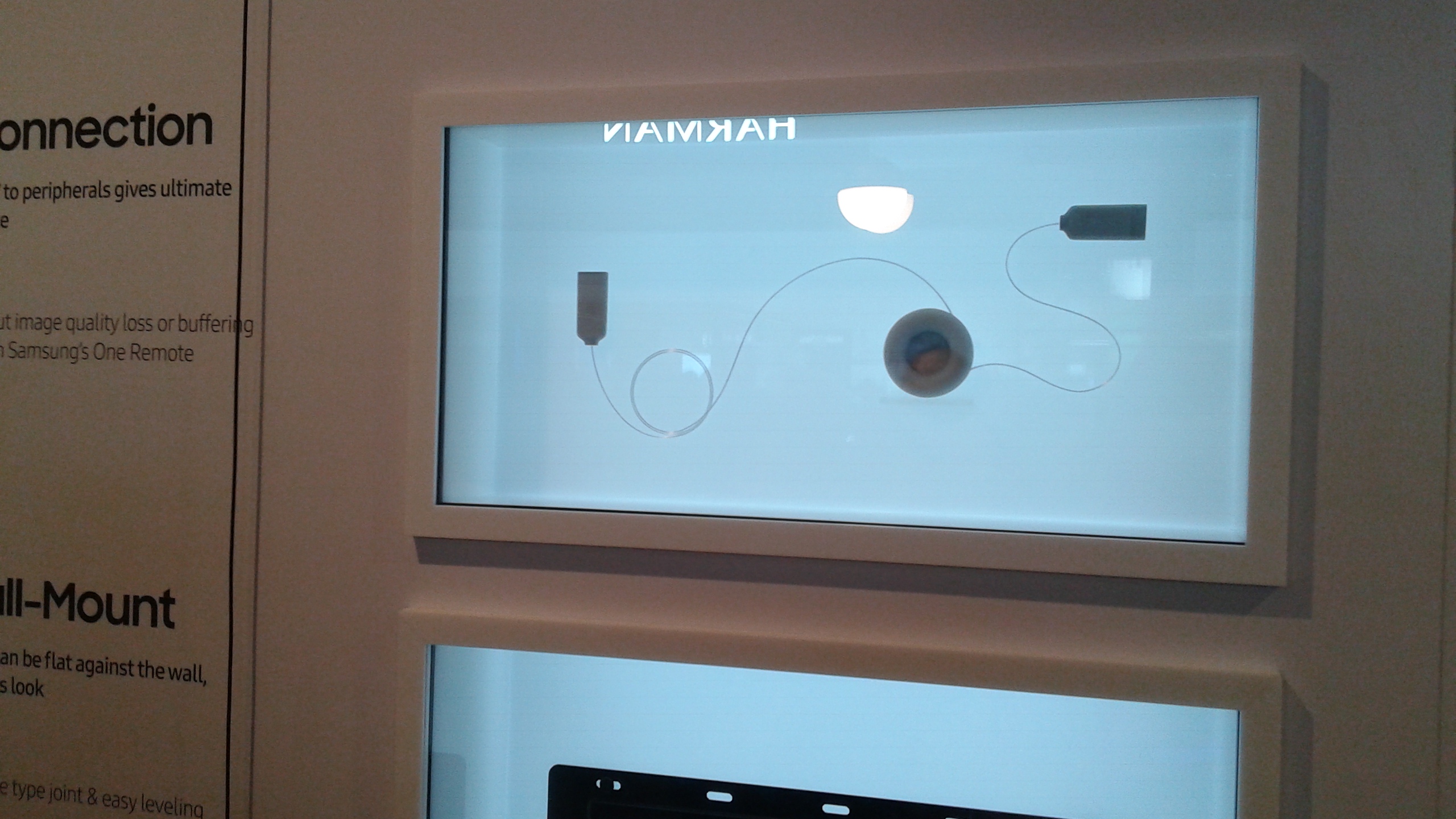 Unfortunately, the Invisible Connection is only compatible with the upcoming QLED televisions, but if it proves popular, I ‘d assume the technology could be adapted to work with other models of TV. I know my wife would be happier if there weren’t a bunch of cables visible under our main television, so here’s hoping this tech expands beyond the high-end models Samsung was showing at CES.