He summarized a recent playtest for the Dry Steppes region

Blizzard is taking a slow and steady approach to talking about Diablo IV, and the longer this potentially-years-away game simmers, the better it sounds to me. The development team’s quarterly update for June 2020 covers a big internal playtest, the open world, multiplayer, items, and other facets.

I won’t recap everything – it’s worth hearing this status update in Diablo IV director Luis Barriga’s own words – but I’ll highlight a few spots. Recently, the team “focused on blocking in all the elements in a region known as the Dry Steppes, complete with campaign content, open-world elements, itemization, a PvP subzone, dungeons, and a cinematic to cap the completion of the region’s narrative.”

On average, in this pre-alpha state, “team members took several hours to complete the campaign content for the [Dry Steppes] region, but those who focused only on the story finished the arc in less than half the average time (and were, of course able to do side content after that).”

Apart from PvP bouts and side-quests, camps – overrun locations that can be turned into outposts with NPCs – proved popular during the session. “For example, one of the camps in the zone was a town afflicted by a curse that turned villagers into piles of salt. Another was a crypt, haunted by a spirit that possesses the bodies of various undead – jumping from skeleton to skeleton until you defeat him.” 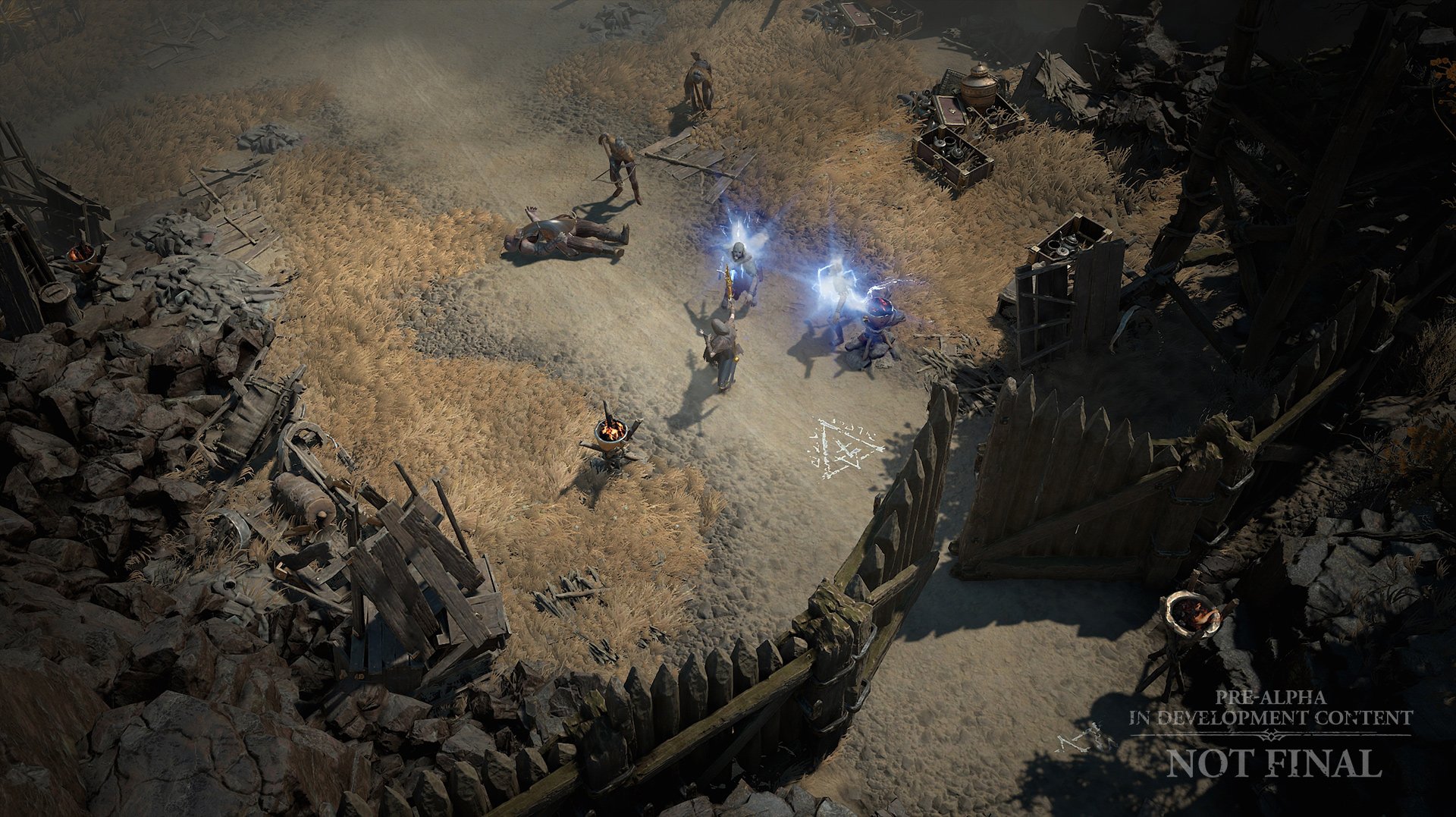 A camp in Dry Steppes.

Barriga admitted that fine-tuning the “seamless” multiplayer in Diablo IV has been “challenging,” and that they’re aiming to “incorporate elements from shared-world games without the game ever feeling like it’s veering into massively multiplayer territory.” It’s a tricky (and divisive) balancing act, for sure.

“We find that the game stops feeling like Diablo and the world feels less dangerous when you see other players too often or in too high numbers,” he added.

It’s worth noting: “dungeons and key story moments are always private,” so randoms won’t suddenly waltz in to kill the mood. In the Dry Steppes playtest, “once story moments are complete and towns turned into social hubs, you’d run into a few people in town. While on the road, you’d sometimes run into a player here and there. And then finally, if you went to a location where a world event was happening, you would see a larger congregation of players trying to defend against an attack by a cannibal horde or trying to take down Ashava, the demonic world boss we showed at BlizzCon.”

Speaking more generally, Barriga said that the two-day playtest and ensuing feedback reinforced the feeling that this group of developers has “the key ingredients for a great Diablo IV.”

“Of course, we still have a lot of work ahead of us and to be clear, we are not at an Alpha or Beta stage yet,” he said. “We don’t typically discuss our early milestones publicly during the course of development, but we think it’s especially important to continue to share our progress during a year without a BlizzCon.” Looking ahead, a “beefier” blog post about items and talent trees is in the works.