DNA splicing will make you a better you in Subnautica

A continuing look at the development of Subnautica

Natural Selection began life in 2002 as a mod that successfully married the first-person shooter and real-time strategy genres. It’s since gone on to eat up the last 12 years of developer Unknown Worlds’ time as they created a sequel, and even an eSports tournament around it. Now, development of Natural Selection II is being handed over to the dedicated community around the game as the studio focuses on their next project, Subnautica.

Subnautica, a vast departure for Unknown, is an underwater exploration and survival game that doesn’t have an emphasis on combat. It made its worldwide debut at PAX East and, despite hiding the game inside a little booth on the showfloor, I saw people lining up every day of the show just to see what this new title was all about.

I visited the team at Unknown Worlds and talked to co-founder Charlie Cleveland to see what the public reception was like, and got some new details on what they hope to achieve with Subnautica. 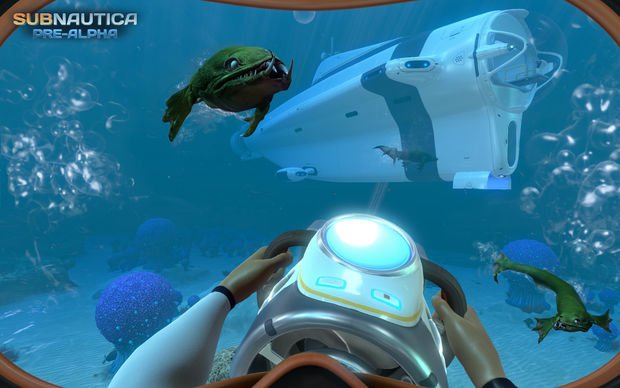 Unknown Worlds is a studio that embraces its community. It was especially important for the team to not only show the game off at PAX East, but to get as much feedback as they could.

“I feel like the response was quite positive to a non-violent sci-fi underwater world,” Cleveland said of the PAX reception. “There was especially a lot of women, a lot of kids, and a lot of parents that all wanted to play that. That was really awesome, because after [Natural Selection II] — I felt it was such a hardcore game and I loved that — but it’s just I want to expand and reach regular people too. I feel like people thought it was a breath of fresh air, and they enjoyed the non-combat elements, and they enjoyed the exploration parts.”

A good majority of the people that were demoing the games at Unknown Worlds’ booth were in fact community, and one member that goes by the name of IronHorse kept pushing this idea of permanence every time people playing the demo would ask. Essentially all your actions will affect the world in some way. A basic example would be a player destroying a coral reef by running their submarine into it. If that happens, it means creatures can’t make their home in it anymore, depleting that region of its formerly native wildlife.

This idea of permanence was a concept Unknown was throwing around, and now it’s something they’re actually implementing because of the response. 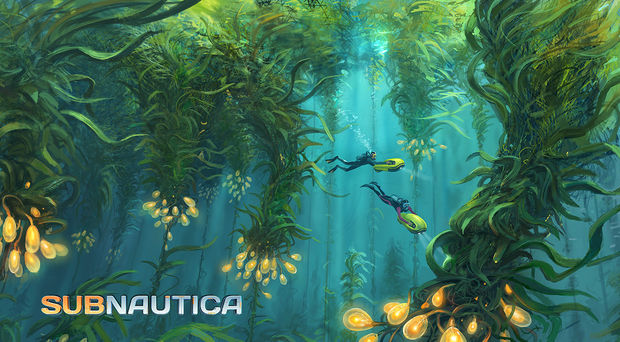 “That idea of permanence really seemed to resonate with people even though it wasn’t in the game at all,” Cleveland explained. “But the way they demoed it and talked about it, they said that every time they mentioned it people got really excited. Which to me is, ‘okay we really have to figure out a way to make that work.’ That was a big shift because we weren’t sure about that before. It was just one of many ideas that we had talked about.”

With this new focus, it opens up many questions for the development team. Specifically, they want permanence but not the loss players typically see in games like say Dark Souls. That said, players can expect a hardcore mode with one life permadeath along with a more casual free mode where they don’t ever have to worry about death. As Cleveland was explaining this to me, he started throwing out ideas of what they could potentially offer players, and it was a nice peek under the hood of game development. One of the more interesting ideas Cleveland mentioned was allowing players to inject a creature with oxytocin (a love hormone) so it would become closer to the player.

All these ideas are great for the development process, but it can also be quite scary for someone in Cleveland’s position. Everything is in production, and you can’t have, for example, the animator just sitting around waiting for some work to drop in his lap. They have to maintain a schedule to get the game released on time, all while maintaining a budget as to not run out of money. 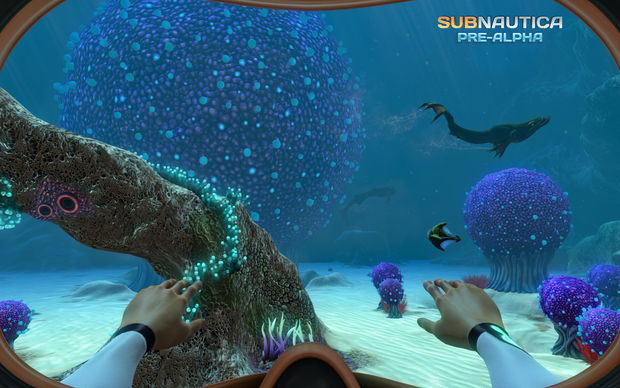 So what kind of game is Subnautica? We’ve grown up always trying to fit games into a specific genre, but that’s not so much the case with game development anymore, thanks in large part to the independent scene.

“For me, it’s about that the thrill, the excitement of experiencing the unknown,” Cleveland said. “Not knowing what’s in the world, how deep you can go, what’s down there, seeing the lifeforms get really weird as you get really deep. It’s basically a really beautiful, life affirming world that you can explore and tinker with.”

Journey was given as an example in regards to the story elements, while the world itself borrows from Skyrim, and there’s building aspects from Minecraft. They’re also borrowing from BioShock as players will be able to inject DNA into themselves. A player could take the DNA from a type of glow fish, for example, so they no longer need a flashlight in dark areas because your body will glow. This in turn means predatory creatures will be able to see you more clearly, however.

“If we can do a game with this art style, non-violent, underwater, where your actions affect the world in a permanent way, I feel like we have enough qualitative data from people that we have a game that people will buy.” 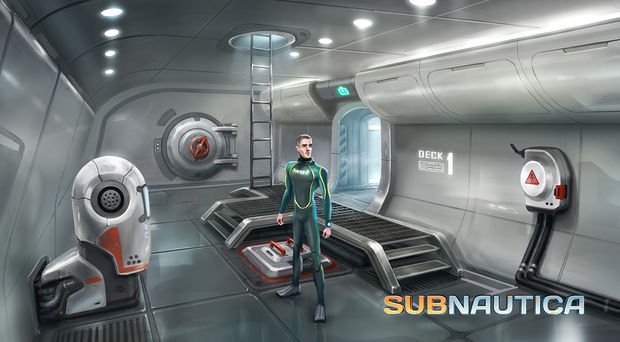 Subnautica was going to borrow another big element from the likes of Minecraft and Spelunky with randomly generated worlds, but that idea has been scrapped in favor of big, handcrafted worlds.

“It’s a huge change for us. Everyone on the team except me was especially excited about that. I’m like ‘GRRR!’ but I understand why, and I think it’s a good decision for us. We’re already having difficulties with areas that felt too generic. And then you’d see a set piece, a really beautiful handcrafted lava-volcano area with caves, and just something very specific and beautiful that if you see that in more than one place you’re just like ‘okay that’s just the same set piece just copied in a different region. It’s not that interesting.’ We definitely risked having this medium ground where the world alternated between generic and copied set pieces.

“There’s a reason why Minecraft and Spelunky can do randomly generated worlds — that’s because their blocks are tiny and their graphical fidelity is low. We’re doing something opposite. We have bigger tiles and our fidelity is much higher. I think if we did a more low detailed world I think it would have been great, but we’re not doing that. At the end of the day we realized we would rather make a very visually appealing world and not have the replayability come from a random map.

“So instead, the way we’re thinking about it now is you start in the same place every time but as you are making choices all through the game it’s changing the world. That’s the idea. We’re hoping, it’s easier said than done. Hopefully your choices will change how you play the game, and so you’ll want to replay it from that perspective. And if you don’t want to replay it, that’s another big mind shift. We don’t have to make a game that has a hundred hours of replayability. I actually really enjoy games that are three hours long like Limbo, Journey, [etc]. I like games that reach a pinnacle of emotional depths so they really capture my imagination, and it’s really short but really awesome.” 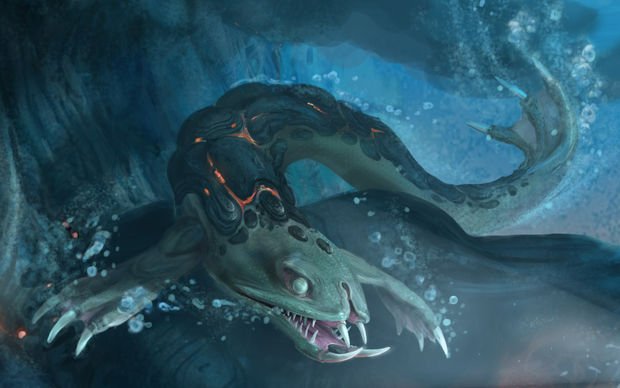 A lot of this is new ground for Unknown Worlds, but perhaps the biggest change for the team is how they’re staying away from violence in general with Subnautica.

“For NS2, we spent so much time fighting each other and just making gun based play. [I’m] just completely bored of that. I’m sure all the people here are too. When I think of things like DNA splicing and taking scientific readings off the bottom of the ocean, to me that’s much more interesting ideas. Something that we haven’t seen very much of.

“The other part is that when I was first prototyping [Subnautica] it was right about when Sandy Hook happened. It was just turning my stomach to think about making another game filled with guns. I don’t believe games cause violence, but I just don’t want to spend my creative energy creating more. So hey let’s try something new! See where it gets us.”

The non-violent approach will also help open up the game to a wider audience. As Minecraft has proven, there is an audience that wants to just build and explore. Still, there are dangers in the wild that you will have to deal with, and it’ll be up to players to figure out how, from just trying to avoid the danger altogether to luring a predator’s food source nearby to distract it. 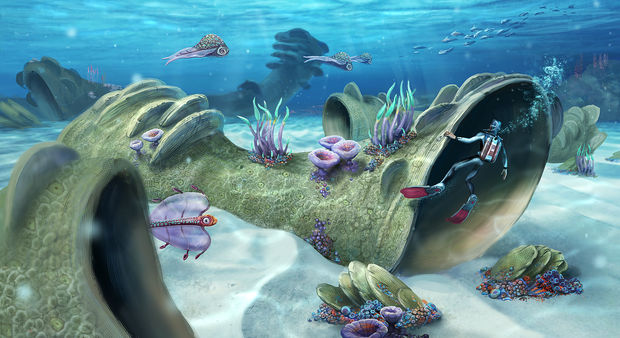 This marks the first of a monthly, recurring series where Destructoid will be bringing you a behind-the-scenes look at the on-going development of Unknown Worlds’ Subnautica. Note that the game will be changing constantly as the team develops the title.

We’ll be following Subnautica‘s development closely over the coming months, up to the targeted August release, and beyond. If there are any specific aspects you’d like to know more about ask away in the comments and we’ll follow up.