Impressions from the closed beta

One of the more prominent reactions from the online community whenDragon Ball FighterZwas first announced was that the anticipation for it seemed to eclipse the already announcedMarvel vs. Capcom: Infinite. The more cynical part of me feared the hype would eventually wane as the weeks rolled on, and a game likeMarvel vs. Capcom: Infinitewould be better received the more we saw of it.

But somehowevery new image, every new bit of info, every trailer, every preview, only served to amplify my excitement. I thought I’d be able to cover this beta without drawing comparisons too closely toInfinitemyself, but after playingInfinitea week and then jumping into this, I had a better feeling coming off of the limited time I had withDragon Ball FighterZthan I had ever dreamed.

It’s just hard to deny a game clearly made with tons of love and attention to detail. 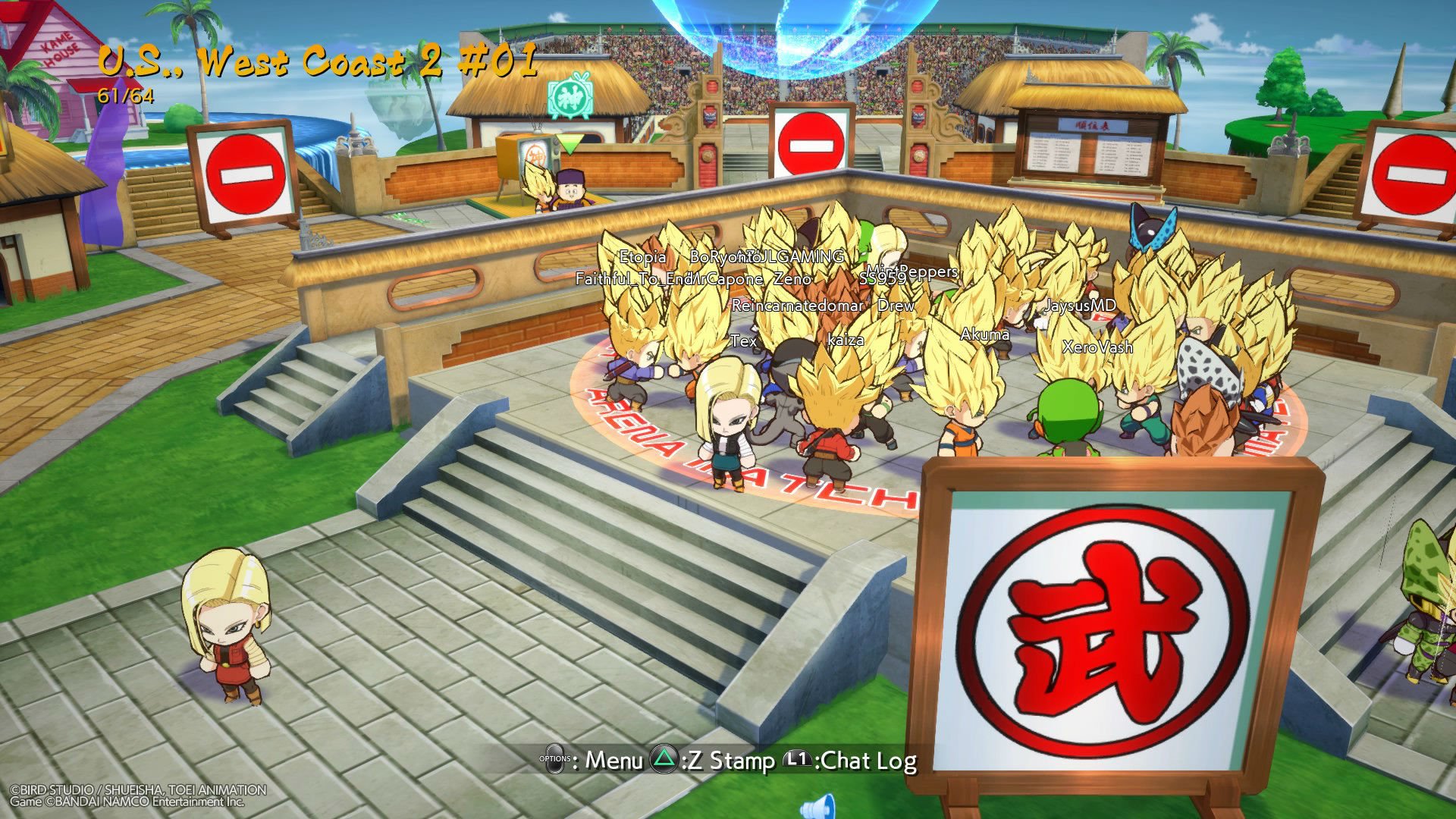 On loading up the beta, of which I was able to play through six hours of, I was greeted with a super cute lobby system I hope makes it to the final title. Players choose a chibi version of their favorite character (I chose the queen, Android 18), and then walk around the World Martial Arts Tournament arena. The beta allowed for spectating, fighting in randomly placed matches, and a small corner where you could watch replay videos. When spectating, your chibi stands on the outside of the arena with their hands in the “You can do it!” anime pose. When waiting for a match, your character stays in a charging ki animation, and cutest of all, when fighting, your chibi punches someone else’s chibi. It’s just adorable. This was a great indicator of the kind of little animations adding tons of personality and color to this package.

Another great detail I hope makes it into the final cut? Each match displayed a frame delay count above the timer, so you know exactly what kind of connection to prepare for before you even throw the first punch. It’s constantly registering the connection (with a 2 frame delay being the best I got, and a 19 frame delay being the worst), so if FighterZ lets online players know the kind of input lag they’re dealing with it’s not only going to help players get better at the game overall, but give them the kinds of quick-adjustment skills easily translatable to other fighting games. It’s also totally in the background, so you’ll be adjusting your play without really even realizing it. You can even ignore it altogether and still have a good time. 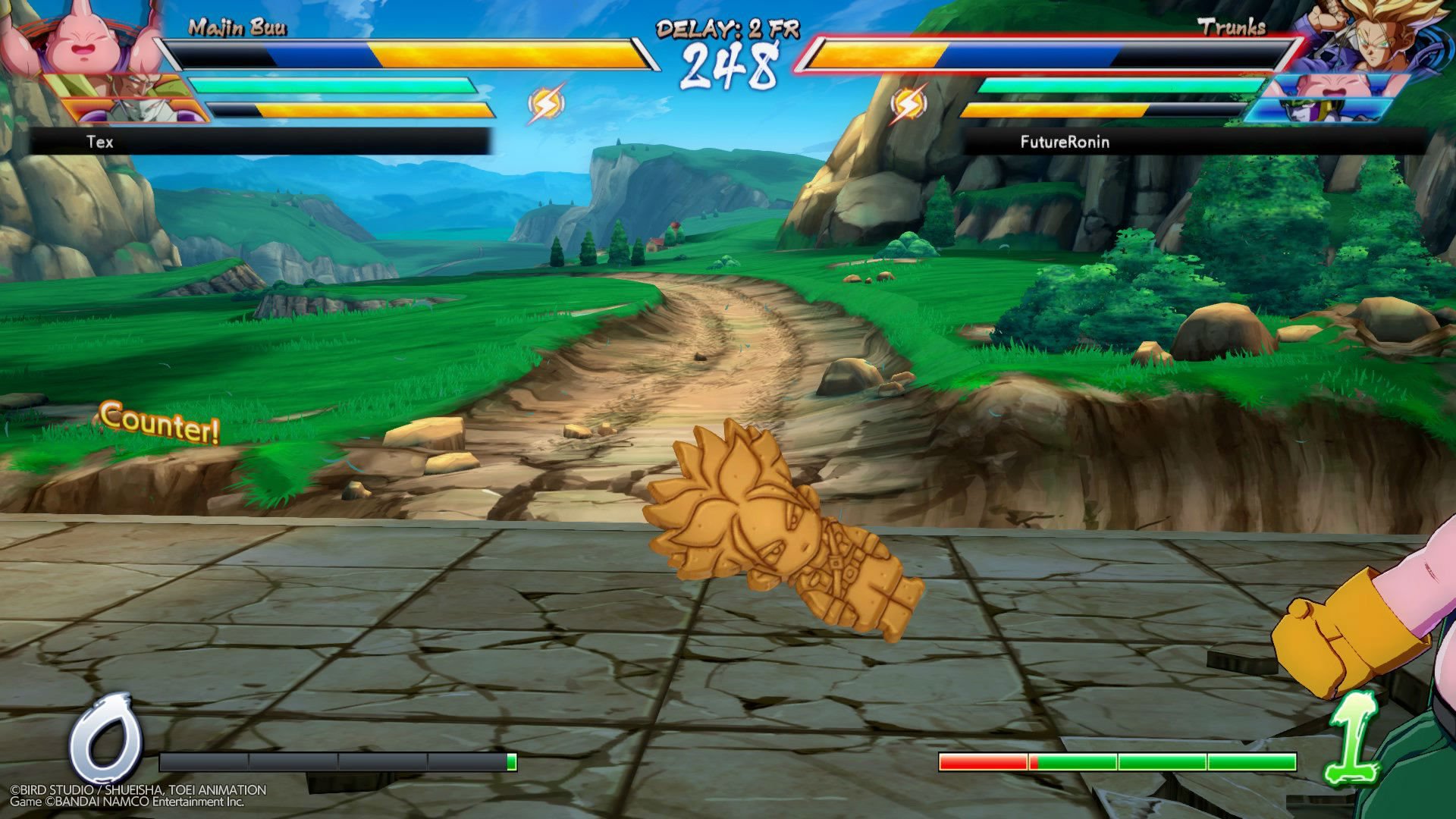 Speaking of a good time, Arc System Works has entirely captured the kind of festival vibe the Marvel vs. Capcom games had become known for. Players at various levels of skill can jump in and easily do cool-looking things. Most character combos (except from the more technical characters like Android 18 and Krillin) are easy to chain together even when mashing buttons, and before long, you and a couple of friends will be throwing full-screen-crossing kamehamehas. Given the fast-paced visuals and moves, there’ll be a temptation to go completely on the offensive. I had a problem my first few matches just constantly trying to rushdown opponents, so I’d heartily get blown up. With the quick visuals and Marvel-esque assist and tag system, I had gone in using MvCstrategies until I realized ArcSys had stealthily improved on some of MvC‘s faults.

The pace may seem fast and chaotic, but movements are deliberately paced. There’s a rhythm to each punch, and many combos can end in either wall bounces, the Dragon Rush (which is a dash yielding a command grab type of attack and launches the opponent into the air as your character gives chase), or a hard knockdown. While there are a ton of projectile specials, the damage scaling on them adjusts pretty well when struck by a combo. So if I were to say, use Frieza to Dragon Rush my opponent into the air, use one of Frieza’s air specials (either his Death Ball or 100% Full Power downward tackle), tag in Android 16 and use a variant of his Hell Flash downward ki special while they’re still on the ground, and finally tag in Majin Buu’s full-screen explosion, it still probably wouldn’t kill the opponent if they had a good chunk of life left. It’s far from the hopelessness of the “one hit and you’ve lost” mentality seen in Ultimate Marvel vs. Capcom 3. 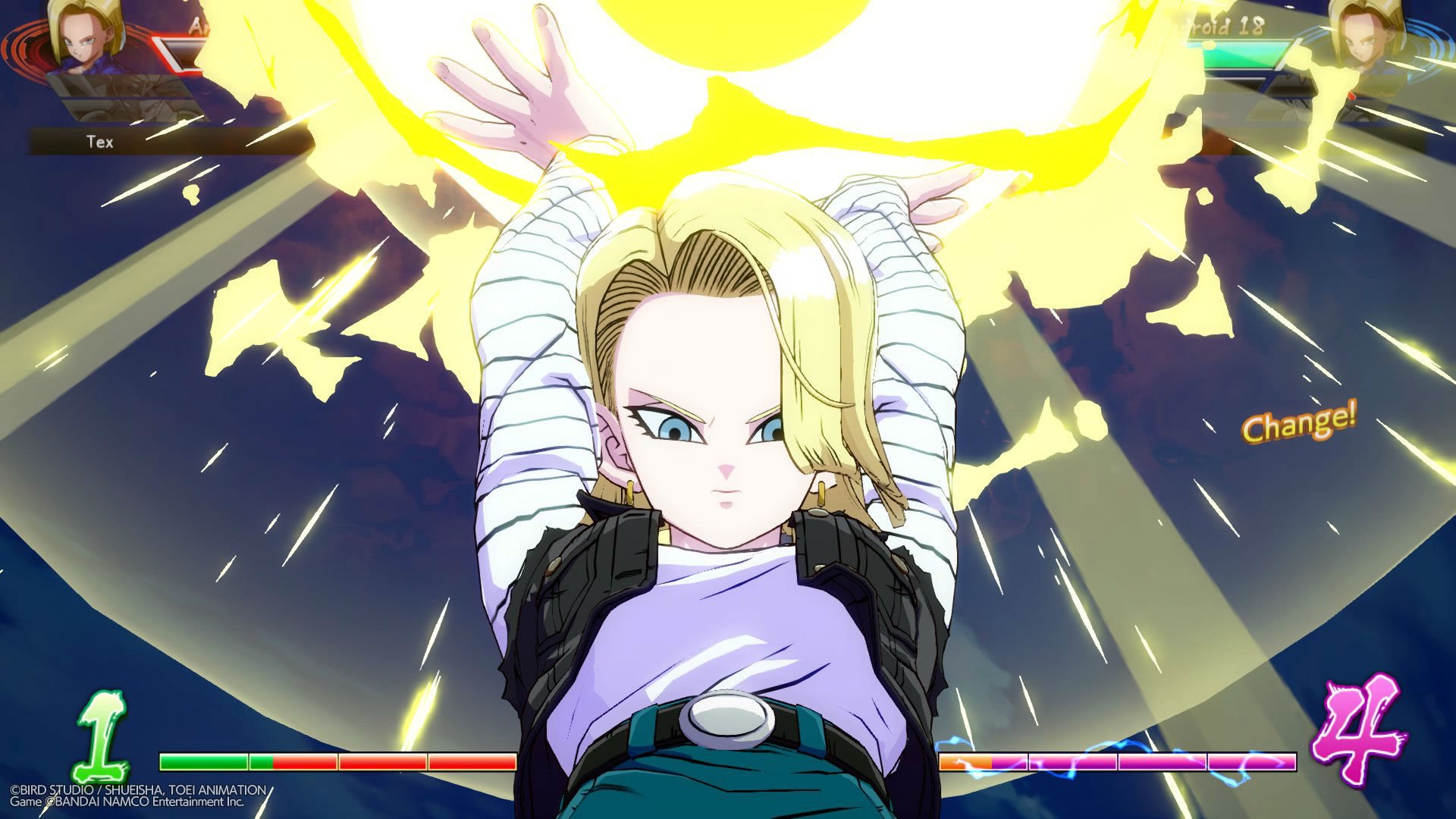 Each of the nine characters available all played differently, and had movesets lovingly informed by the source manga and anime. Goku and Vegeta essentially serve as the Ryu and Ken of FighterZ, with easier-to-pick-up movesets and specials without too much craziness though Vegeta can cross the screen at a faster pace, and Goku can utilize a “warp” super and catch an opponent off guard. Trunks’ normals have a lot of reach, but he doesn’t do much damage and lacks mid-air supers. Cell has the most mix-up potential, but isn’t very popular. Gohan’s quick and speedy, Piccolo’s limbs can lead to some crazy grabs, Android 18 can extend combos even further with well-timed assists from Android 17, Frieza can throw pizzas, Majin Buu is slower but can quickly cartwheel away out of combos, and Krillin is a friggin’ weirdo who throws rocks and Senzu beans.

And then there’s Android 16. By far my favorite character of the beta, and is probably going to be a lot of folks’ favorites too. There’s a reason ArcSys is building a story mode around him, as his playstyle is actually far more approachable than anyone on the roster. He’s a character with okay projectiles, but amazingly effective command grabs. He can even grab a character mid-air and bring them aaaaall the way back down to the ground. He’s the best example of ArcSys’ deliberately paced take on MvC‘s system and just so much fun. 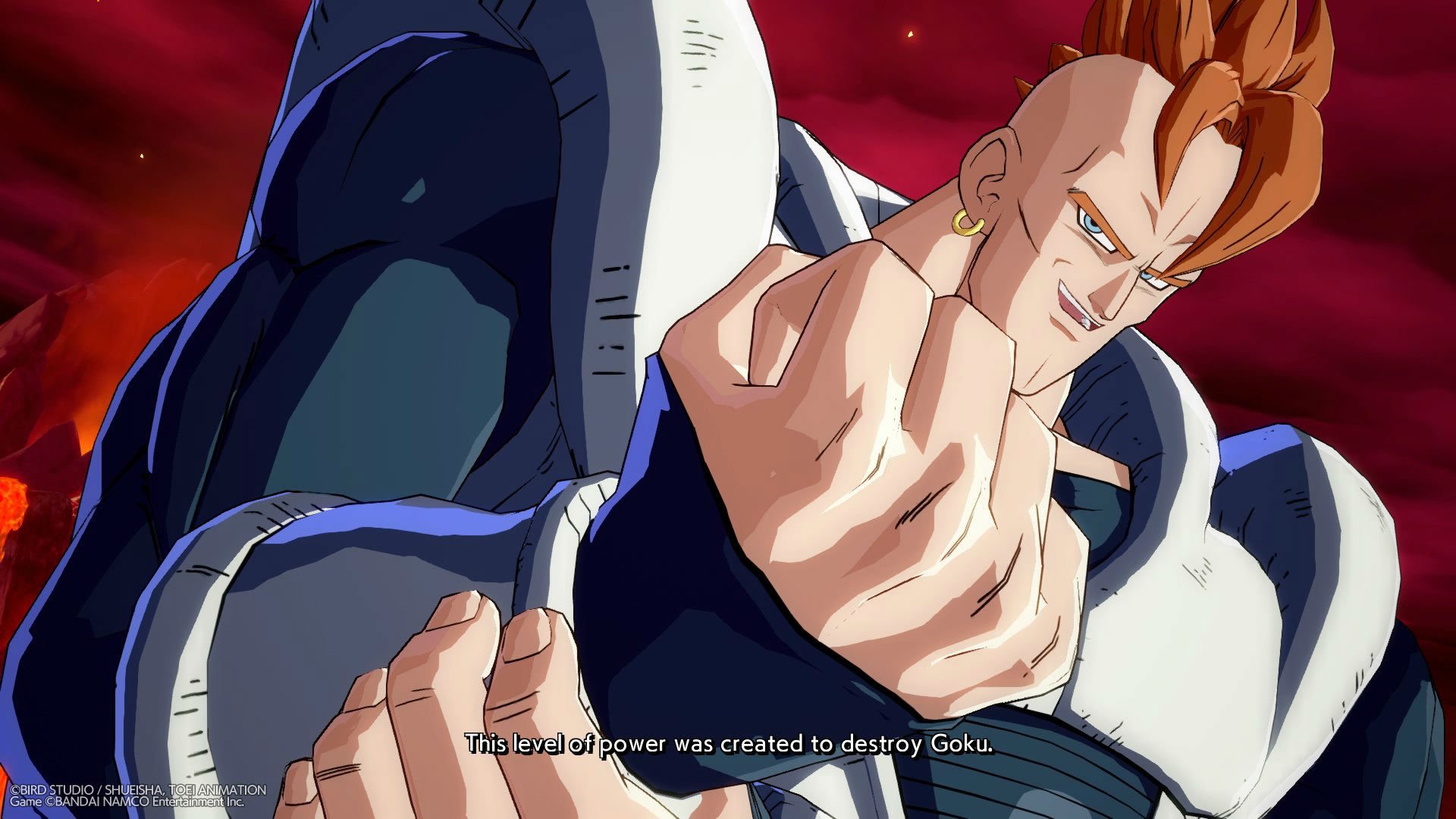 Now it’s not perfectly tuned as of yet as the lack of a push block can get you stuck in a corner (and subsequently blown up), or limit your options to respond. The Sparkling Burst can save you once, but isn’t a full response to this. There’s also a sort of nonsense feel to the super attacks since tagging in a new character’s super will position you at another point in the stage leading to all sorts of wonky stuff. This can definitely be worked through with time, but also reflects the craziness of the show itself. It’s a real toss up.

I remember the first time I played X-Men vs. Street Fighter. It was tucked away in the corner of a small arcade within the theater of my local dead mall. To use a trite phrase, I couldn’t believe my eyes. Characters I knew were being shown through this colorfully chaotic and wonderful new filter, and it pretty much set me out on the path I’m on today. It had made such an impression on me, I still even remember putting a quarter in for the first time. It’s a carnival vibe I had only associated with the Marvel vs. Capcom series to this point, so I can’t believe playing another game brought me back to that very first quarter. It’s the kind of celebration and love of its source material we deserve in a video game.

If Dragon Ball FighterZ can deliver on this outstanding level of promise not only will it satisfy Dragon Ball fans who’ve been dreaming of this kind of fighter forever, but it may even fill the gaps of fighting game fans searching for a new tier of hype.