Akira Toriyama is arguably the most well-known artist out of Japan. His name is synonymous with two of the most popular franchises in the world: Dragon Balland Dragon Quest. The former is his own creation, one that came to life over 11 years in the pages of Weekly Shoñen Jump and created a massive media empire that’s given us anime, movies, and one of the best fighting games ever made.

The other is a series he initially didn’t want to work on, as I found out in the preamble to Dragon Quest Illustrations, a new art book from Viz Media encompassing 30 years of the franchise. He had to be begged to give the project a shot back when Enix and Yuji Horii were trying to get it off the ground. Now, it’s a series that just wouldn’t look the same without his artistic input. Dragon Quest Illustrationsis an illustrious look at all the creations Toriyama has introduced into the Dragon Quest franchise, and while it succeeds at showcasing his talent and creativity, it’s pretty barebones as an art book. 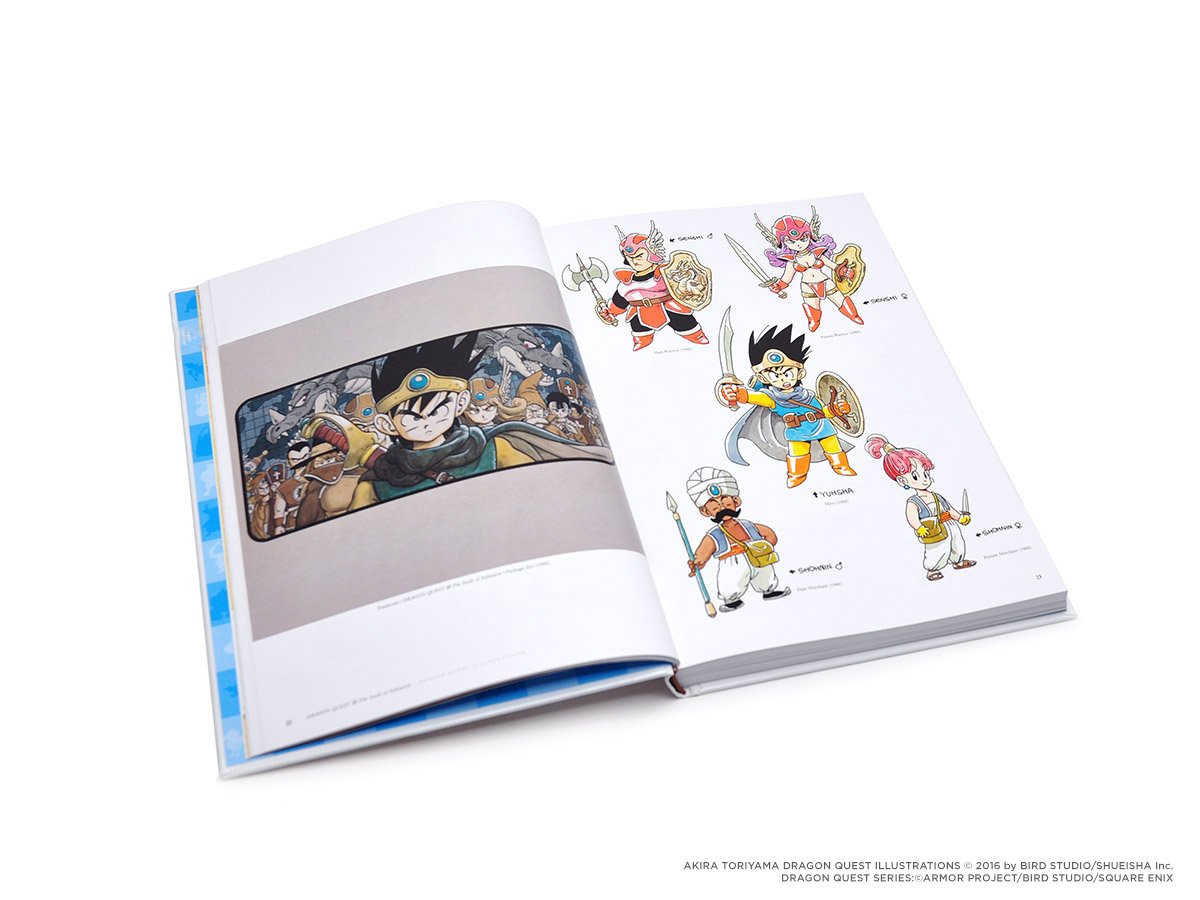 The book cover for Dragon Quest Illustrationsis a great indication of what you’ll find on most of the 240 pages within: character art on plain white backgrounds. The art is presented chronologically, with each game getting its own set of pages dedicated to the characters and creatures Toriyama created for it. Going back to the earliest games and reading through to the most recent is a wonderful glimpse at how he has come into his own as an artist and how his creations have really shaped the world of Dragon Quest.

There are also a few pages dedicated to the box art Toriyama created as well as some magazine covers. Characters and creatures from Dragon Quest spin-offs are here as well, but their sections are quite short and limited to just a few characters each.

If you’re expecting some sort of glimpse into Toriyama’s creative process, you may be disappointed. There are no rough drafts or early concepts of characters. All of the illustrations included here are of the final art found in the various game manuals and promotional materials. There are some alternate color patterns for enemies in Dragon Questand a few cute examples of unused pixelated designs from Dragon Quest II, but most everything in here is the cleaned up/ready-for-display artwork that we’ve been admiring for the past three decades.

Maybe I’ve been spoiled by other art books that really go deep into the process, but as I perused the pages of Dragon Quest Illustrations I couldn’t rid myself of the nagging feeling that it was a bit underwhelming. Toriyama’s art is strong enough to stand on its own and maybe that’s why Viz Media decided to put his work on plain white backgrounds, but something that’s supposed to be covering 30 years of a celebrated franchise, one famous for its character illustrations, should have a bit more production value. There are small notes written by Toriyama on some of the pages, a few different character expressions for a couple of his creations, and a handful of the designs here ultimately went unused, but other than that it’s all just art we’ve all seen before, presented without an ounce of grandeur.

It’s also without his most recent work. Though the hero from Dragon Quest XIappears on the cover, there is no dedicated section for the game. This book was originally published in 2016 to mark the thirtieth anniversary of the series. Dragon Quest XIdidn’t come out until 2017 and as such, the only included art is that of the protagonist. Now in 2018, with the game available for fans worldwide, nothing has changed. More art from the most recent title could have been added to this international release to keep it current with Toriyama’s contributions to the games, but it seems that wasn’t in the cards.

Despite sounding a bit down on the book, I still do like Dragon Quest Illustrationsbecause I am first and foremost a fan of the franchise and Mr. Toriyama’s contribution into making it the iconic RPG it is today. It doesn’t tell me anything about how he went through the process of making each and every character, but it does give me a crystal clear look at the gorgeous final product. Dragon Quest Illustrationsis available starting today with an MSRP of $34.99.

[This impression is based on a retail version of the book provided by the publisher.]