Dungeons II takes a humorous approach to being the bad guy

Make way for the villain

Being the bad guy has its perks. With an entire force of orcs, goblins, and other nasty creatures at your bidding, more gold you can count, and a near infinite supply of dark magic at your disposal — it seems like you’ve got things pretty much handled in your conquest of the world. But fate seems to have other plans. And with a snarky disembodied voice mocking you and narrating your journey, it certainly looks like your quest for power will be a lot more difficult than you thought.

This is what you can expect in the upcoming sequel to Dungeons. During a private session at a press event by Kalypso Media, I got to spend some hands-on time with their upcoming Dungeon Keeping/RTS hybrid title Dungeons II, that aims to take a light-hearted and comedic approach to being the evilest villain in all the land.

Set in a Medieval-fantasy world full of humans and orcs on the brink of war, you play as the Dungeon Lord. Due to a magical spell, you are bound to your throne in a cave, and must rely on your minions to do your bidding. With the humans drawing closer to your realm, you must break the spell by expanding your resources and your army in order to fortify your dungeon, while retaking territory from the humans on the surface.

While this may sound as generic as it gets, and it certainly does at first glance, Dungeons II takes great pride in defying expectations and subverting them. During my first hour, I found that Dungeons II felt very much like a parody of generic fantasy/adventure games. Many of the tropes and cliches are mocked and made light of, despite adhering to them in humorous fashion. Moreover, Kevan Brighting, the Narrator from The Stanley Parable, offers his talents here by breaking the fourth-wall to mock player’s slow progress, and even going after the video games ratings system. I was always entertained throughout, and a lot of that had to do with the game’s comedic tone.

As the sequel to the original Dungeons, you’re tasked with expanding the scope and scale of your dungeon, while keeping your minions happy. As you send your lesser underlings to create rooms for resources, and digging for gold, you have to monitor their happiness levels or else they’ll revolt. By building breweries, you can keep them drunk and content, while paying for their services as well. As you build your base of operations, you’ll eventually be visited by humans from the surface, looking to see what all the commotion is about. From here, you’ll have to set traps and send out stronger minions to confront them and protect the Dungeon Lord.

But here is where things get a little different. Once you’ve built the necessary resources and have a sizable force, you can send your minions up to the surface to retake territory. Switching over from Dungeon Keeper gameplay to RTS style mechanics similar to WarCraft or Dawn of War, the pacing changes up considerably. From here, you can battle your foes and sack their villages, turning the whimsical and lush environment, to barren and scorched wastelands. 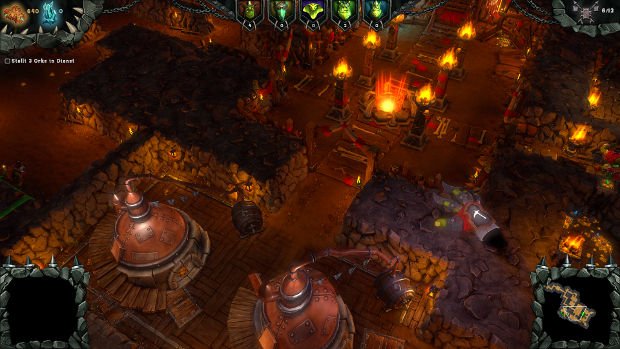 I was very impressed with how seamlessly Dungeons II transitions between the two different styles of gameplay. You can switch between the two on the fly with no loading whatsoever, which makes alternating between battles on the surface and making sure your minions in the dungeon are collecting resources very simple. Though be sure not to divide your forces so readily. If your send all your offensive minions outside, you can potentially leave yourself open to attack, as the lesser minions in the dungeon cannot defend themselves or the Dungeon Lord.

Eventually, the Dungeon Lord and his forces will grow in power and come into conflict with other foes of the fantasy world, such as Dwarves and Elves, and they’ll utilizes skills and tactics that will put abilities as the lord of evil to the test. During my session, I came into contact with a tribe of goblins hiding out from the Humans. Realizing that their resources would be put to better use elsewhere, the Lord recruited them and used their tinkering skills to build devices to defend the dungeon. 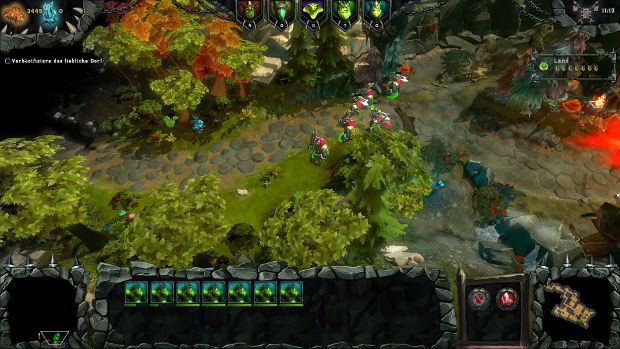 Even though my time with the game wasn’t as long as I would’ve hoped, I came away pretty pleased with what I experienced. Though I’m generally not a fan of RTS titles, I did enjoy my time with Dungeons II. I was very much impressed with the sense of humor on display. It’s always great to play a medieval-fantasy game that doesn’t take itself seriously, and even makes some light-hearted jabs at the genre.

With much more of the game in store, and including four-player online mode, Dungeons II looks to be a very solid and unique take on the classic Dungeon Keeper gameplay. If you’re eager for a game where you play as the bad guy, then you’ll want to keep this one on your radar.