E3's Senran Kagura showcase is both titillating and ridiculous

Unlike Senran Kagura Burst for the Nintendo 3DS, which was more of a side-scolling fighter akin to Final Fight, Senran KaguraShinovi Versus for the PlayStation Vita now finds the player in a 3D plane where enemies can approach from all sides. 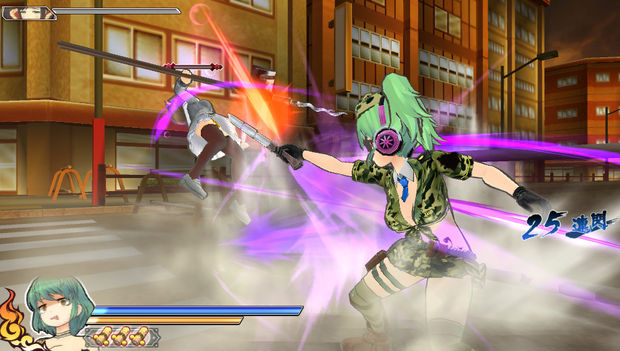 Similar to the previous game, the girls are assigned to five-member factions. There are four unique factions this time around, with the Hebijō school joining the pack for Shinovi Versus. Players will start with only three factions to choose from, unlocking the fourth as they continue to play through Story Mode. Other modes of play include Mission Mode and Challenger Mode. In the latter, players fight against the other characters one after another, whereas in Story Mode, one would have to fight through minions to reach them.

And of course, it wouldn’t be a Senran Kagura game if clothes weren’t ripped frequently (take enough damage and off go your garments). And although the game’s backstory is surprisingly deep, the stripping aspect seems to detract from it, making it harder to take anything seriously. I understand that I am not the series’ target audience but the sheer amount of bouncing and blushing made me feel a little uncomfortable.

Purists should be pleased to hear that the original Japanese voices are in this version as well, now with subtitles. DLC includes two additional characters, weapons, items, and costumes. The items can be placed anywhere on the body, adding an additional layer of character customization. 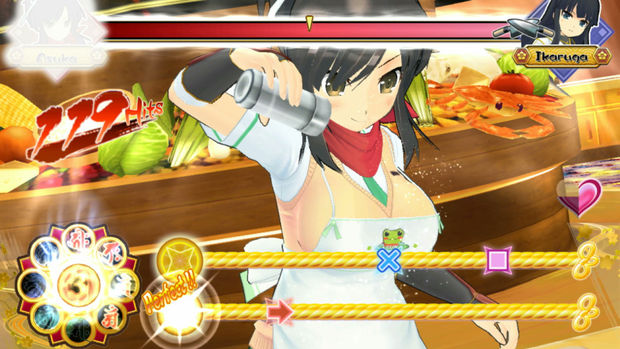 The girls take a break from beating each other up to hold a cooking competition in Senran Kagura Bon Appetít!The premise is that they are competing for a magic bead that grants wishes. And some of those potential wishes are pretty darn silly! I found it particularly funny that it goes out of its way to state how this is not canon. Because the other titles are as solemn as the plague, right?

Bon Appetít! is a rhythm game in which the player must keep track of both top and bottom bars, hitting buttons in time with the music. By creating combos and timing hits wells, the player can earn a chance to trigger a multiplier, increasing their combo’s worth. Miss a step, however, and that boost comes to an end. Knowing when best to initiate the boost added an extra layer of strategy. The levels I played were moderately challenging at first but once I got comfortable with this setup and the beat, I got sucked in. The stage music is based on each of the girls’ theme music, which is all rather catchy.

Every girl makes a specific dish and their score affects the finished product’s look and size. Do particularly well and you may even earn an extended cutscene at the end of the judging round. Some of these skits, like an old judge floating away on a boat of seafood, were so over-the-top that you can’t help but crack a grin.

Of course, the loser of the match has to lose her clothes (all the way down to just her panties in some cases; nipples are censored with smiling faces). Because it’s Senran Kagura and that is what they do. But add in the ability to manipulate the view of the now-revealed Shinobi using the Vita’s gyroscope control and the game started to feel like it was a bit much for me. Again, I am clearly not the audience for this.

Whatever DLC you have purchased forShinovi Versus will carry over to Bon Appetít!, making the game’s roster of 10 girls spike to 22.

Senran Kagura Shinovi Versus is scheduled to release this fall, while Senran Kagura Bon Appetít! will be available via download this winter.