EA wrangled glistening, sweaty hold of the UFC license in a closeted deal with defunct THQ and have a game, EA Sports UFC, in the works for PlayStation 4 and Xbox One slated for spring 2014. Here at E3, we were shown a presentation about the amusingly named title and a brief snippet of pre-alpha footage.

The focus of EA Sports UFC is, as one might expect, realism. All the fighters have had a 3D head scan in order to help represent their likeness in game and the tech demos of facial animation shown off were pretty neat. Nothing as terrifying as Lebron.

Then again, behind me was a row of monitors with animated, subtly moving facial busts like Futurama‘s head museum, all looking at me, menacingly. 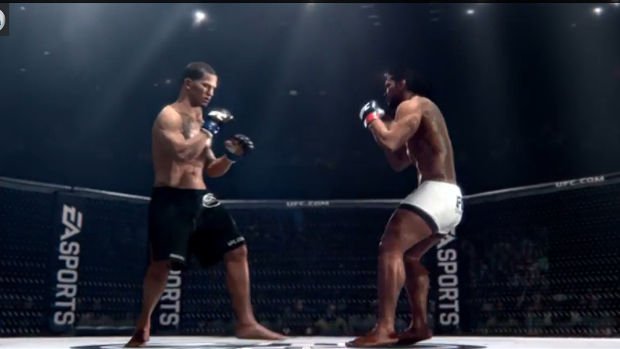 In addition to fighter likeness and facial animation, EA Sports UFC is touting touches like “real time skin discoloration” as the result of submission holds and visible veins that pop out even more distinctly when fighters are exerting force. We’re far beyond the days of joking about developer’s freaking out over player sweat physics.

Additionally, the game will feature real time damage with much more variety than we’ve seen in the past. Before, a player might develop a cut and then several more blows would be needed to make the cut visibly worse and everything was very linear and repeated. Now, a hard-hitting elbow could open a blood fountain 15 seconds into a fight.

The game’s director also touted the soft and squishy body physics of the new game that also our soft human forms to mold over and interact with each other during submissions — no more hands floating next to a character being held.

All of this was a pretty impressive tech display, so hopefully the game itself holds up. The snippet of real time action we were shown looked great despite being pre-alpha. With EA’s new Ignite engine, the players appeared to have sufficient weight and heft and everything appears to make contact. You can even do moves off of the cage.