Elder Scrolls on mobile is a surprisingly engrossing experience

Also pretty to look at

If there’s a collective of mobile titles I point to whenever somebody asks me for a smartphone game that doesn’t cost any money but is still fair to fans, Fallout Shelteris usually the second title I bring up. Since launching more than three years ago, it’s been one of the most successful examples of taking a traditionally console universe and turning into a free-to-play experience. It’s been so successful, Bethesda ported the game to consoles where it continues to thrive. It’s an absolute success story, one the publisher is surely hoping to mimic with Elder Scrolls Blades.

Announced at E3, Elder Scrolls Bladesis a free to play role-playing game that, unlike Fallout Shelter, seeks to recreate a great chunk of the Elder Scrollsexperience with a touchscreen interface. The game is divided up into three different sections: city builder, dungeons, and a procedurally generated endless dungeon. At PAX, I get to try out the dungeon mode in the demo, getting a great feel of how this works in action. 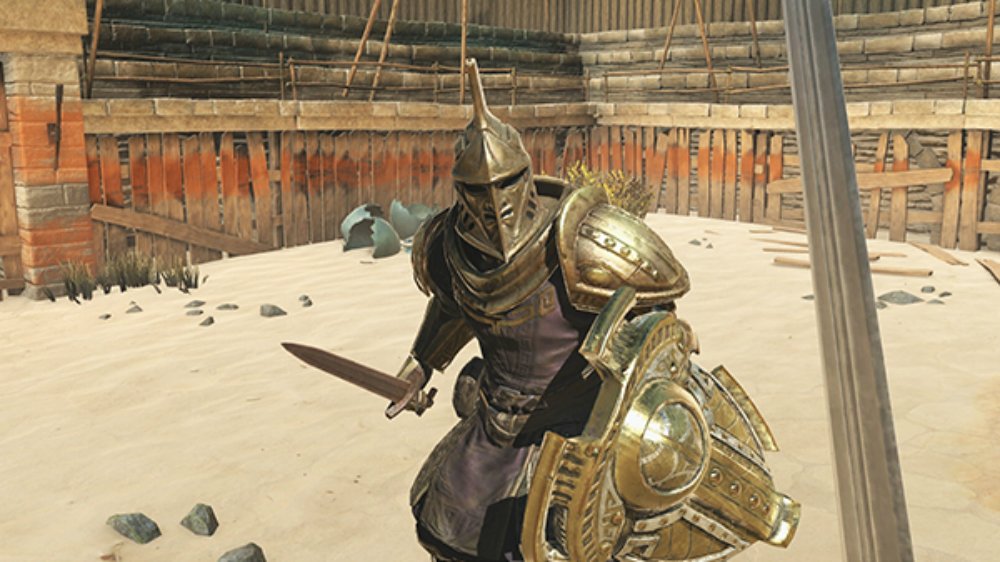 Bladescan be played in either portrait or landscape mode and after about 20 uncomfortable seconds with the former, I switch to the latter for the remainder of my session. It feels far more natural as a two-handed experience, allowing me to attack and block with ease using the on-screen commands. Movement is similar to Life is Strangeon mobile where I touch a spot on the ground and my character moves there. The forest dungeon I explore for the demo looks quite beautiful, like a PlayStation 3 game, but the ground isn’t defined enough for me to always see a clear path forward.

As for combat, I’ve never been the biggest fan of the Elder Scrollsformula but it works well here. Swings of my sword are activated by holding down the right side of the screen with other actions, such as shield bash, magic, and defense relegated to specific buttons on the screen. The buttons are a bit small, but I don’t have an issue where I accidentally press the wrong button. Enemies in the dungeon have their own tactics, but I find a well-timed shield bash is the best way to open them up for damage.

While the path of the dungeon is quite linear, there are few opportunities to venture off the beaten path for secrets and treasure. I find a glowing log not far off the trail, and after defeating a nearby goblin, smash it open and grab a green gem, one of the in-game currencies. In total, the demo takes me roughly 15 minutes to get through, which feels close to the exact amount of time I’ll be able to dedicate to the game in the free moments of my day.

Still unknown to me is how the city builder feature will operate in the game, though it’s hinted buildings will be built based on how quickly I am able to fulfill specific quests. Information on monetization for the title is being kept under wraps, but the Bethesda associate on hand confirms there won’t be any sort of energy meters to have to deal with. Elder Scrolls Blades is expected to launch this Fall for iOS & Android with plans to port the title to PC and consoles at a later date. The game is available for pre-registration today in Google Play.