Motherhood fascinates me. I’m an only child raised by a single mom. Her constant support, alongside my grandmother and aunts, created a web of matriarchal love throughout my childhood (this totally includes embracing my video game habit). I had exposure to masculinity through my grandfather and uncle, but I was predominantly sculpted by strong female hands. Growing up with such an intricate network of motherly influences has shown me countless perspectives of motherhood; still, it’s impossible for me to fathom without creating a life of my own.

I cannot comprehend the depths of a mother’s attachment to her creation — I can only conceive the idea of motherhood, not the reality of it. Such divine development deserves appreciation.I will never know how it feels to grow a human being inside myself, but I admire those who do. That is a bond I will never know. In this regard, I am no different than the machines in NieR: Automata.

Mother Machine’s attempt to confront the depths of humanity through the lens of an overshadowed mother is commendable.Grandiose stories about time, identity, and purpose permeate throughout Automata.They demand most of your attention, and while the complicated reveals are worth the time it takes to mentally process them, there’s much to learn from the recognition of Mother Machine’s obscure plight. 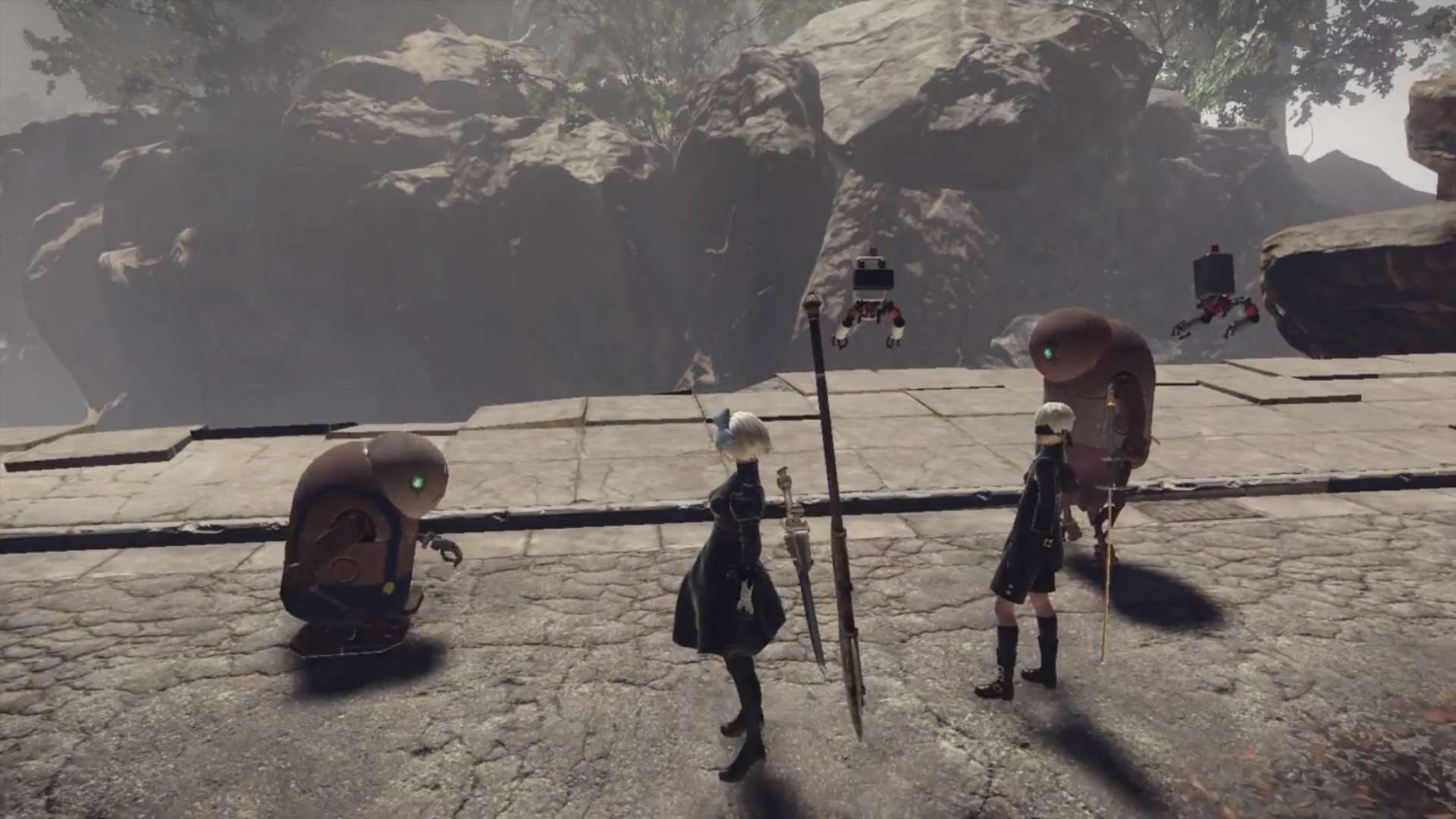 Automata’s premise is as approachable as the game gets: humanity flees from an alien invasion by evacuating to the moon, then eventually sends an army of android soldiers to Earth to take it back. Alien machines were used as weapons to decolonize the planet, but the foreign robots lack another directive. Their prime directive was to destroy all humans; now, with their target gone, what do they do?

Eventually, the machines attempt to emulate the very society they first sought to eradicate. One machine puts makeup on their face in an attempt to generate affection from another. Some machines are self-proclaimed scientists pursuing imagination through invention, big sisters protecting smaller siblings, stamp collectors seeking self-awareness. For the machines to find purpose, they must first understand the logic behind humanity’s own identity crisis.

Good fucking luck with that.

Sex is barely experienced by a romantically defunct human being like myself, let alone a machine looking for purpose; still, the machines engage in the clanking of sexual discovery. They cannot control how others perceive them, yet they continue to cultivate meaning through gaining another’s affection. The machines cannot bear a child, nor can they watch one grow, but their nature is programmed to nurture as humanity is the only life they know to exist.

Mother Machine’s story isn’t captivating. It’s not meant to be. In the Family Squabble side-quest, Mother Machine’s child (aptly named “Child Machine”) runs away after an argument between the two, and so she asks you to retrieve the little robot tot. Compared to the game’s overarching narrative, it’s a small tragedy, but one of Automata’s greatest strengths is its ability to emulate heartbreak at any scale. Refusing the quest is difficult to justify as you’re showered with a number of useful resources as a reward, and seeking out Child Machine exposes you to a tantrum of emulated emotions. 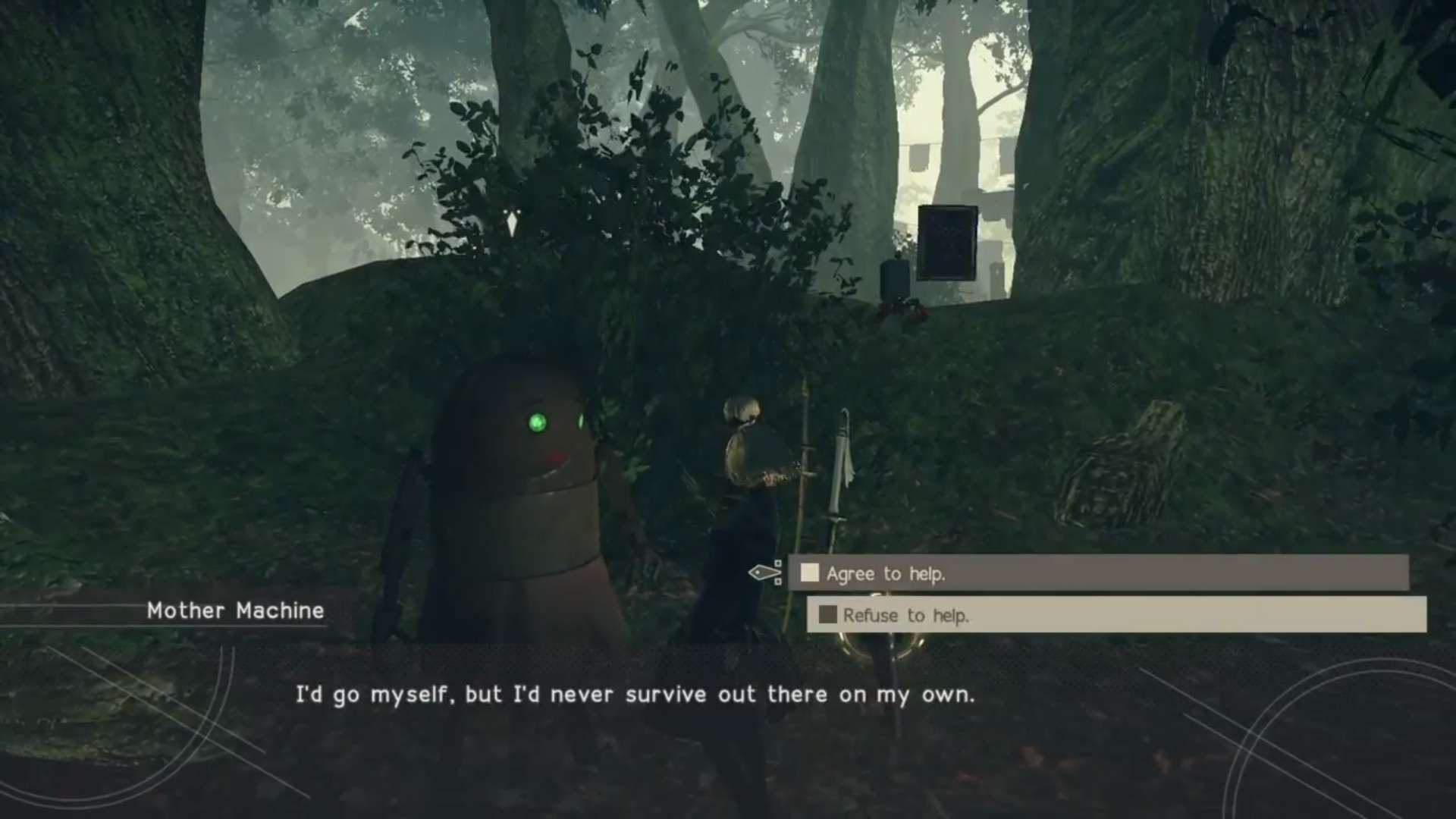 After tracking him down, he gets attacked by ravenous hordes of his own kind. As you fight to prevent his destruction, he screams in adolescent agony. “It’s not fair! I hate my mommy! I HATE her.” Child Machine’s script ends mid-battle. He goes silent. Once the enemies are defeated, he calms down and agrees to come along back to his mom. Upon returning Mother Machine’s child, the metal scamp hops off and leaves you with his mom’s response to your kindness.

“I never imagined how hard it would be to disconnect from the network,” she tells you. “We’re constantly misunderstanding each other. Still, on those rare cases where we connect, it makes me so very happy.”

Mother Machine, in the most unassuming way, reminded me that while mortality is tragic, it affords progress. We may never live long enough to see the true effects of our own actions, but we dodge an existential bullet. The machines reveal a discerning hardship: they don’t grow.

The parent-child relationship exists, unchanged, forever. Their inability to adapt keeps them in a perpetual loop. They are made mothers, made children, and now, out of context, they’re digging through their psyches to try and figure out why any of this feels so important. Immortality and eternity denies what makes motherhood motherhood. Growth. A father sows the seed; a mother grows the plant.

We biological beings rely on our timeline of cyclical identities to facilitate change until we die — an impossible metamorphosis for machines. From newborns to adolescents, teenagers to “adults,” we are constantly changing. Our identities fluctuate, and our sense of purpose alongside it. Before I came along, my mom was a girl in her early twenties living her life. Now that I remain childless in my late twenties, my appreciation for her grows exponentially; the older I get the more I realize how much of herself she gave to me. With or without regard, the very nature of being a mother demands time, money, and body be placed upon the sacrificial altar of parenthood. 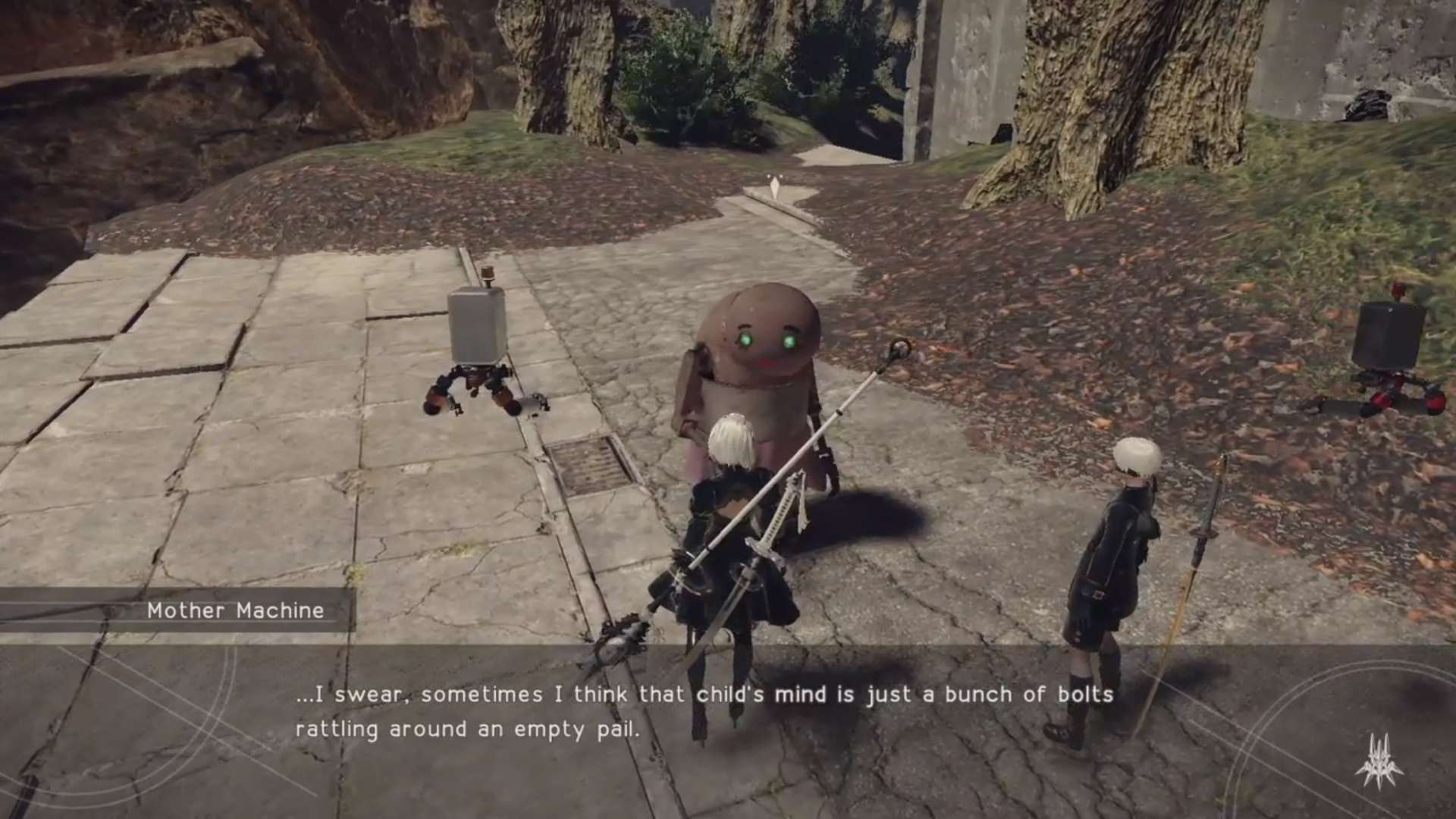 As each year passes by and life continues to add layers of complexity, your level of involvement with your mother changes from reliance to choice — if you’re fortunate enough to make the decision. Our lifelines place value on independence, so the older you get the more it means to spend time with the woman who birthed you. The action of decision is given an implicit weight of importance solely because time is finite — well, for us. Mother Machine doesn’t give a shit about time. She’s only worried about Child Machine. Forever.

The realization turns their relationship into an inexplicable bond that could actually come to an abrupt end. Through misunderstanding, Mother Machine comes to realize loss by considering another life. An alternate reality without her son. Decisions and actions may cause friction, but where there is friction, there is malleability, and through the forge of contention comes growth. If only we had all the time in the world to grow forever.

Whether or not you give Mother Machine recognition by completing the quest, this parent-child relationship exists within Automata’s world. You decide to help Mother Machine. Or you don’t. She stands there worried as she watches you leave her line of vision, and she’ll stand there longing long after.