This entry is all about Rayman Origins. Feel free to share some of your own favorite things about the game in the comments! 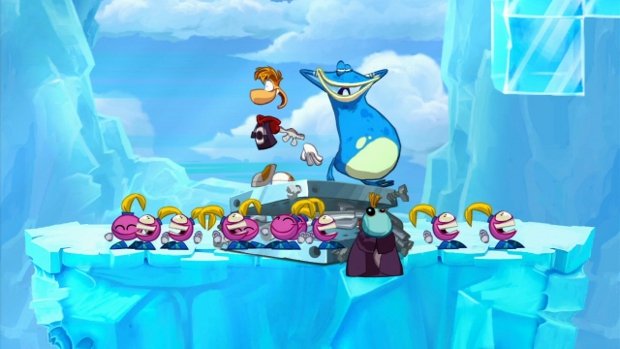 Rayman Origins is just about the happiest game I’ve ever played. Every little aspect of it seems to be built around the sole purpose of making players smile. For example, achieving almost any goal will cause Rayman and friends to break out in dance. Whether he completes a level or simply rescues a few Electoons, Rayman can’t help but celebrate by busting a groove.

Each of the characters have their own dance moves, but Rayman’s got the best moves by far. He seems to really like disco, as much of his dancing takes inspiration from that. He also has this really weird dance whenever he rescues Electoons, where he sort of humps the air a few times while swinging his hands back and forth with a wild grin on his face. It makes me laugh every time.

One of the funniest scenes in the game also revolves around dancing. When Rayman encounters the Magician in the Moody Clouds, the antagonist suddenly drops a funky beat. Of course, Rayman will take any opportunity to break into dance, so he busts out some of his sweet disco moves alongside the Magician. They look to be having fun dancing together before the bad guy runs away unexpectedly while Rayman is still too busy moving to the music. It was all just a clever ruse! And you have to admit, tricking someone into dancing so you can get away is probably one of the best escape plans ever. 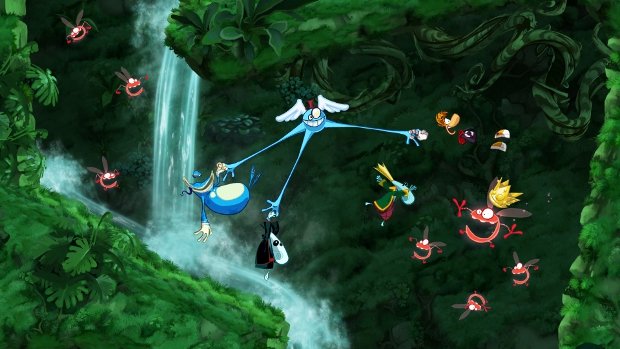 Rayman and friends aren’t the only ones having a good time. If there’s anything that will get players dancing along to the game, it has got to be the King Lums. Lums are the collectibles of Rayman Origins; they’re these happy little yellow dudes who hover in the air and play musical notes when they’re collected. They’re everywhere.

King Lums are a little bigger than your typical Lum, and they wear big gold crowns so they’re hard to miss. Grabbing a King Lum will trigger a short, incredibly happy tune which causes all the other Lums to turn red and start dancing, meaning they’re worth double points until the song ends. Gotta move fast and collect as many Lums as possible before the music stops!

It’s almost physically impossible for me to not dance at least a little bit after grabbing a King Lum. I always catch myself bobbing my head, moving my torso, or tapping my foot to the melody. I just can’t help it; it’s the happiest, catchiest music! 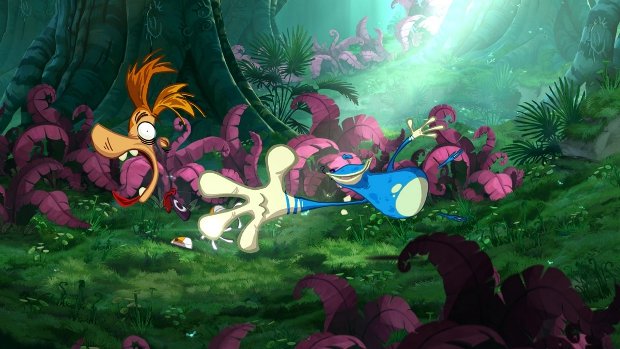 Playing Rayman Origins with friends is a hilarious experience. Technically, everyone is cooperating to finish the level, but things can get competitive very quickly.

You see, not only are players able to punch and slap enemies, but they can even beat their friends up as well. Smacking your friends doesn’t cause damage, but it does make their characters yell out in ridiculously exaggerated pain, which is really funny to watch.

It’s pretty much an eventuality that every cooperative session of Rayman Origins will turn into a slap-fest at some point. It’s difficult NOT to hit your friends, even if it’s an accident, which will inevitably cause them to hit you right back. And thus the friendly fighting begins. Who will win in a slapping contest: Rayman or Globox? There’s only one way to find out! 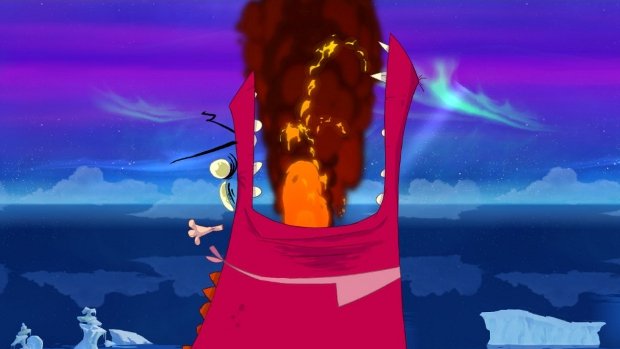 In the belly of the beast

The bosses in Rayman Origins are fantastic. There’s a fat, googly-eyed bird; a thorny plant monster with a huge head; a giant, eel-like sea dragon; and a dragon chef suffering from severe heartburn.

The ailing dragon chef, named El Stomacho, is definitely my favorite one. This boss’s level is called “My Heartburn’s for You,” which is just about the best level name ever. He’s so big that he swallows Rayman and friends whole, meaning the boss fight actually takes place inside his stomach. Rayman will have to avoid streams of flame and rising stomach acid as he waits for an opening to attack. This dude’s heartburn is no joke!

After each attack, there’s a brief cutscene as the camera cuts outside to El Stomacho himself, who looks like he’s about to barf with all of this activity upsetting his stomach. Finally, Rayman manages to escape back out the way he came, as he’s launched out of the dragon’s mouth along with a huge burst of flames.

The massive dragon then shrinks down considerably to a tiny little lizard chef and breaks into dance with Rayman. In fact, all of the major bosses shrink down into these adorable little forms and start dancing after being defeated, and it always makes me happy. They weren’t really bad guys after all! 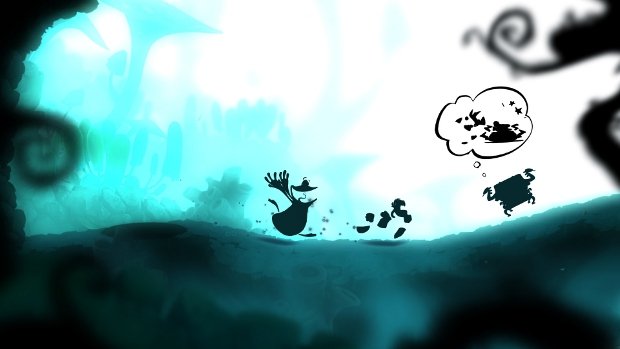 Rayman Origins may seem like a fairly simple platformer at first, as most of the levels are straightforward and dying only brings Rayman back to the beginning of the room he’s currently in. The main game isn’t too difficult.

The Tricky Treasure levels, however, are an entirely different story. Each world has a Tricky Treasure level which is unlocked after freeing a certain number of Electoons. As their name might suggest, these levels are seriously tricky! Each treasure level is a race to the finish where every action counts. Slip up even once, and it could be over very quickly. Rayman only has one shot at success, or else he has to start the entire level over from the beginning.

Some of these levels are particularly brutal. I had to run a few of them over and over again until I knew every move I had to make by heart, to the point where I felt as though I could probably beat it again with my eyes closed. It was like Super Meat Boy levels of punishing platforming in this cute, cartoon-y Rayman game, and I loved it!

Plus, the music for these levels is fantastic! I didn’t even mind that the music was being repeated ad nauseum, because it was so upbeat and catchy. I’d often find myself humming along as I ran, only for the song to be cut short by some choice curse words whenever I died again. 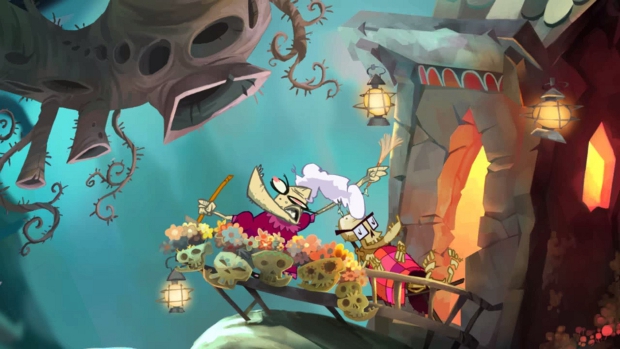 No country for old grannies

I thought the Tricky Treasure levels were difficult enough, and then I came to the Land of the Livid Dead. Holy cow, you guys!

The Land of the Livid Dead is a secret final area only accessible after beating every Tricky Treasure level and returning the crystal teeth to the old man in the Snoring Tree. It’s a dark, gloomy underground graveyard full of thorny, eyeball-laden vines, pillars of flame, and angry grannies! That’s right, angry grannies. The Land of the Livid Dead is populated by irate, undead grannies who won’t hesitate to kick Rayman off their lawn. They’re kind of the greatest thing ever.

This area is an intense mega-marathon to the finish line. Luckily there are checkpoints, but even so, getting to the end is no easy feat. Once again, I got a sense of the crazy Super Meat Boy difficulty of the Tricky Treasure levels, and this quickly became my favorite area in the game.

The level ends with a super ridiculous boss battle against a giant, hairy, many-eyed monster, who is busy painting her nails, singing a silly tune, and bathing in lava when Rayman interrupts her. She lets out a horrified scream (in a much deeper tone than her singing voice), and tries to shake Rayman off of her arms as her spiky bracelets slide around. She’s such an unexpectedly bizarre final boss, and the perfect way to end such a great game.

Oh, and I can’t forget to mention the music from the Land of the Livid Dead, which is heavily inspired by Ennio Morricone’s soundtracks to classic Spaghetti Western films such as The Good, the Bad and the Ugly. It’s my favorite music in the entire game (which is saying a lot, since all of the music is fantastic). Lucky for me, too, because I had to hear that music A LOT.

I’ll round this post out with another wonderful soundtrack selection. While it’s not my personal favorite, the music from the Sea of Serendipity is definitely the most iconic music from Rayman Origins. The tracks “Lums of the Water” and “The Lums’ Dream,” both subtitled “Glou Glou,” feature nonsensical vocals by the Lums. These peaceful, dreamy songs play while Rayman and friends are swimming around under the sea. It’s impossible for me to listen to these tracks without smiling. They’re beautiful and adorable, and they fit perfectly in the world of Rayman.