This entry is all about Metal Gear Rising: Revengeance. Feel free to share some of your own favorite things about the game in the comments! 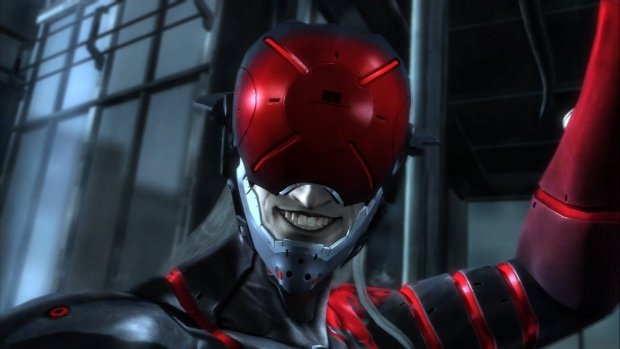 When it rains, it pours

Metal Gear Rising is full of insane, high-energy boss fights. Sometimes Raiden will be up against gigantic war machines which he can climb all over, and sometimes he’ll be in one-on-one duels against villains roughly his size. But no matter what, the fights themselves are always impressive.

My personal favorite boss is Monsoon. He’s a cyborg ninja with distinctive red and black armor and a helmet covering most of his face save for his creepy grin. His weapon of choice is a pair of sais, which he’s quite deadly with. And true to his name, his boss fight takes place in the pouring rain.

His most unique feature, however, is the fact that his body is actually made up of a bunch of smaller segments held together by electromagnetic forces. This allows him to separate his body at will, which he does quite often in order to attack from great distances and to easily dodge incoming attacks. If Raiden tries to attack normally, he won’t be able to land a single hit with Monsoon’s body constantly shifting, separating, and reconnecting at high speeds to avoid injury. Patience and clever tactics are required to even scratch this guy.

After a while, Monsoon will begin demonstrating another ability which allows him to lift and hurl enormous objects. He starts chucking tanks and aircraft at Raiden like it’s nothing, even going so far as to meld a bunch of them together into one giant Katamari-like ball of metal. Things get pretty crazy!

This fight in particular forces the player to master parrying, a skill which quickly becomes essential for survival. If Raiden is unable to parry effectively in the fight against Monsoon, he’ll be taking far too many punches, kicks, and sais to the face to survive for very long. It’s one hell of a fight, complete with an excellent heavy metal-ishtheme song, and it perfectly encapsulates the frantic, over-the-top combat of Metal Gear Rising. 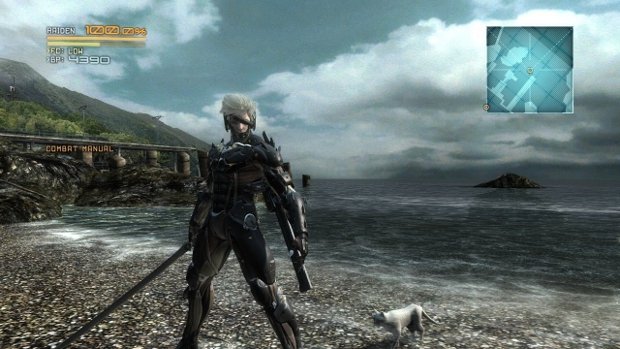 There is possibly no greater character in Metal Gear Rising than the cat. What cat, you ask? You know, the ninja cat! It can be found walking around the beach in R-01. It’s kind of hard to spot sometimes, so the player has to really be looking for it, but it’s totally worth it to seek the animal out.

What’s so great about this small white cat? It doesn’t really do much of anything, just wanders around the beach lazily. That is, unless Raiden tries to attack the poor, defenseless kitty. Don’t worry though, there is no way Raiden is going to land a hit on this cat.

When attacked, the cat will perform a killer backflip and dodge out of the way. Every single time! No matter what attack Raiden throws at this ninja cat, it will demonstrate its impressive evasive skills and come away unscathed. I spent so much time on the beach just watching this awesome cat backflip out of the way of every move Raiden attempted. Had the cat decided to go on the offensive and scratch back, Raiden surely would have been defeated by this nigh invincible feline.

The ninja cat also makes another appearance later in the game, during a long cutscene where Monsoon is having a chat with a weakened Raiden. The camera can be controlled during this scene, and if Raiden looks to his right, he’ll see the cat walk right up to one of the cyborg soldiers. The soldier gets really excited, getting down on the ground on all fours to pet the kitty before it leaves him in disinterest. Then the soldier gets back up and sadly waves goodbye. It’s really adorable and goofy, and it completely turns Monsoon’s serious monologue into a bit of a joke. 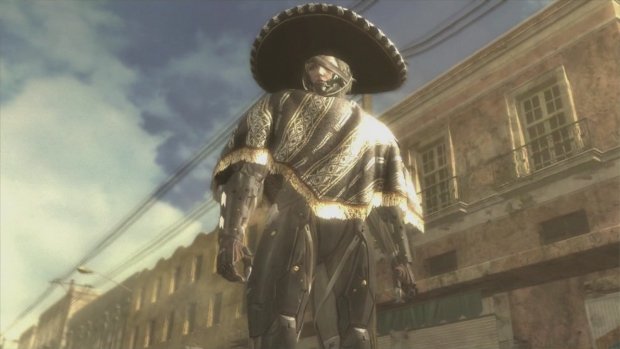 Early on in the game, Raiden has to swing by Mexico to infiltrate a cybernetics lab. He was apparently told to wear a disguise so as not to draw too much attention to himself in this foreign country, so of course he goes the full stereotypical route and decides to wear a poncho and a ridiculously large mariachi hat. Excellent choice!

Immediately after stepping out of his car, everyone around notices his strange appearance and starts freaking out, commenting on his outfit and wondering if he’s actually a mariachi player or rather a cyborg in disguise. He quickly descends into a sewer, ditching the outfit and saying, “Adios, amigos,” as he disappears. It’s pretty much the best cutscene.

Then mission R-02 begins with Raiden back to his normal suit (lame!). I was pretty disappointed, as I was really hoping I would get to play the entire level as Mariachi Raiden. Fortunately for me, the mariachi outfit becomes unlocked as an alternate skin after completing R-02, meaning I could play the remainder of the game in a totally absurd costume. Obviously, I only played as Mariachi Raiden from that point on. I mean, how could I not? 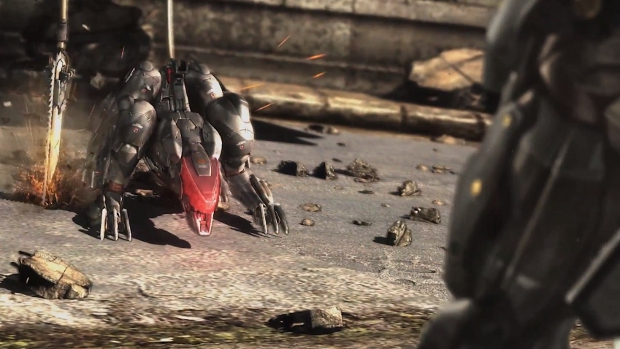 Raiden’s mechanical canine companion, Blade Wolf, is such a joy to have around. He may not be useful for combat (his AI apparently lacks brutality), but he is very helpful for scouting purposes, and he’s a surprisingly entertaining conversationalist as well. He may be a robot, but he has quite a unique personality since his AI was created to be similar to a human brain. He’s especially noble, often questions why killing is necessary, and is always yearning for freedom.

I particularly enjoy Wolf’s dry sense of humor. He always takes notice of Raiden’s jokes and likes to point out that he doesn’t think Raiden is very funny. He’s also quick to pick up on puns and expressions, such as when Raiden said they should “throw him a bone” and Wolf quickly noted that his choice of words was amusing on two levels, since his body is modeled after a canine and canines like bones.

Wolf was even popular enough to get his own DLC chapter where he was featured as a playable character. It’s a pretty neat side chapter which requires the player to be extra sneaky to get stealth kills, since Wolf himself is not that great at fighting (even though he has a giant chainsaw which he can fling around with his tail). I’m glad he got so much recognition as an excellent character, worthy of being playable even though he’s not humanoid. Honestly though, who wouldn’t want to play as a badass robotic wolf? 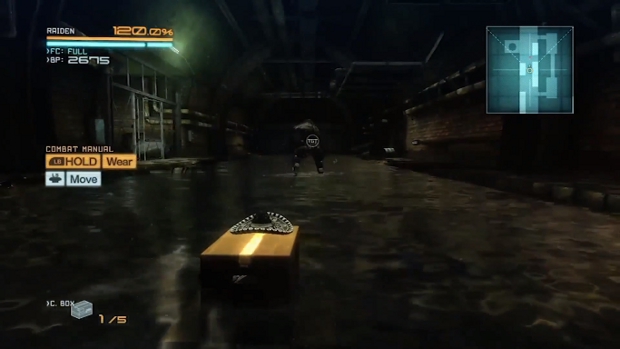 Ah, cardboard boxes. A classic staple of the Metal Gear franchise. They’re back once again in Metal Gear Rising. Raiden can of course find cardboard boxes scattered around which he can hide under and walk around in a most (in)conspicuous manner. And not just cardboard boxes, but metal drum cans as well. Plus, if he’s wearing the mariachi outfit, the boxes and drums he hides under will be decorated with his festive hat. Totally not suspicious-looking at all!

My favorite thing to do is to have Raiden hide inside a drum can while wearing the mariachi outfit and then go into a ninja run. This causes him to fall over and start rolling around sideways inside of the drum can, with the hat somehow remaining firmly fastened to the top. This move can actually hurt enemies and destroy parts of the environment, but eventually Raiden gets sick and has to stop rolling to vomit.

Metal Gear Rising even went a step further with the cardboard boxes by including enemy soldiers which hid inside boxes themselves and could be found and killed for an achievement. There are a total of five of these MIBs (Men In Boxes) to find, and locating all of them unlocks a special wooden sword. The first one I found made me laugh pretty hard, because I honestly wasn’t expecting anyone else to be using the cardboard box tactic. Apparently, it’s becoming quite a popular technique! 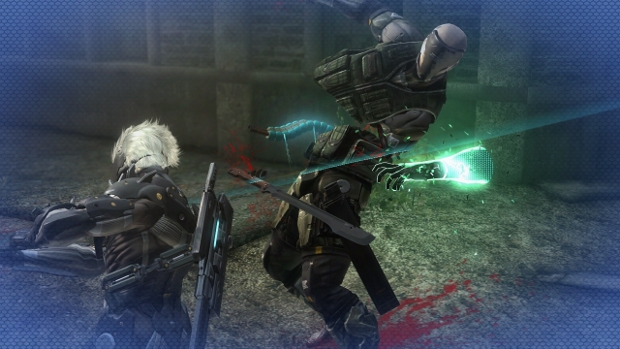 It may sound twisted, but slicing enemies up into tiny bits in Metal Gear Rising feels incredibly satisfying. It probably helps that most of the enemies are machines, and even the humanoid enemies are riddled with cybernetic enhancements, so slicing them up doesn’t really result in a bloodbath of internal organs and icky stuff. It’s mostly mechanical body parts, with a bit of blood splatter thrown in for color. But still, it feels amazing.

Raiden has a special ability which allows him to essentially slow down time in what’s known as “Blade Mode,” so that he can hack and slash enemies with quickness and precision. With Blade Mode activated, a single cyborg soldier can become hundreds of sliced up pieces of cyborg soldier within a matter of seconds, as Raiden unleashes a flurry of sword swipes in every direction. It’s almost hypnotizing to watch it happen.

And it’s not just the enemies Raiden can obliterate. Most of the environments are fully destructible, so even when he’s not in combat, Raiden can enter Blade Mode and slice things up to his heart’s content. I spent a lot of time running around the levels trying to see what all I could destroy, slicing up trees, tearing through cars, turning crates into splinters, bringing down entire staircases. It just felt so satisfying to watch the world crumble at my hands. Mwahahaha!