This entry is all about Red Dead Redemption. Feel free to share some of your own favorite things about the game in the comments! 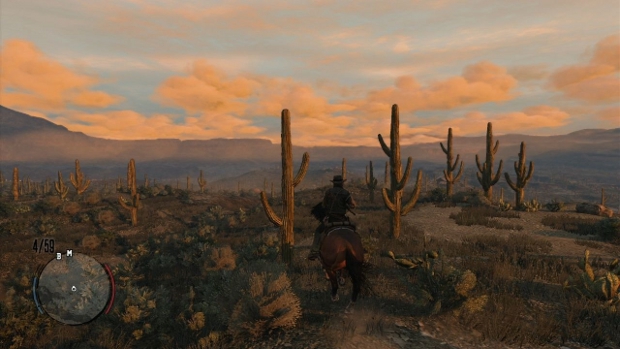 There really aren’t enough games that go for the Wild Western setting, and probably no other game pulls it off quite as spectacularly as Red Dead Redemption. It’s set in an area inspired by the Rio Grande Basin connecting Texas and Mexico, as well as the deserts and prairies of Arizona and New Mexico. It also takes place in a time of Wild West cowboys, horses, outlaws, gunslinging, and saloons, so it basically feels like playing a classic Spaghetti Western film.

The desert vistas in this game are absolutely gorgeous. In fact, my favorite thing to do was just to ride around and look at all the different locations. The sandy expanses, the majestic rock formations, the fields of cacti and desert shrubs, the old Western-style towns and dilapidated structures, and those sunsets… my god. Every inch of this game is stunning. Sometimes I just sat around on top of my horse for a few minutes and marveled at the world around me.

I’ve only been out West once in my life, when I was like five years old, so I didn’t really get to appreciate it as much as I would have liked. I’d love to take a trip around that area again sometime, in part because Red Dead Redemption makes it look so beautiful. It’s rare that a game makes me want to go out and see the world like this one did. 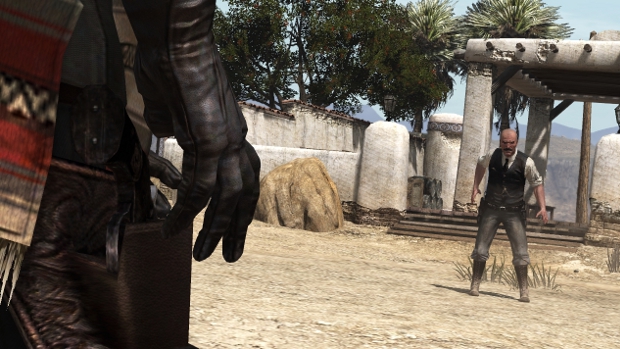 Good old-fashioned duels are a staple of the Western genre, so it’s no surprise they make an appearance here. I’ve been obsessed with Western duel scenes ever since I watched The Good, the Bad and the Ugly, which has quite possibly the most glorious duel ever filmed. Two men (or three, in the case of the film) standing at a distance, their hands readied above their guns, sweat rolling down their faces, waiting for the signal to draw their weapons to see who can shoot faster and become the victor… it’s always such a thrilling scene to watch.

The duels in Red Dead Redemption aren’t quite as long and fancy as the ones from Sergio Leone’s films, but they’re still very satisfying. Some duels take place as a part of the story, but many occur randomly. Marston may be challenged to duels by outlaws just by walking through a town, or if he’s caught cheating at poker, or even if he rudely knocks over a passing stranger. If he accepts the duel, then the standoff begins. The camera shows both participants before coming in close to focus on Marston’s hand hovering above his holstered gun, and then time slows down as shots are fired. It’s very cinematic, which makes it feel even more like an homage to its film inspirations.

I also like that, in some cases, Marston can win by simply disarming his opponent rather than killing them. Doing so generates both honor and fame, while killing only generates fame. It makes me feel good to play as the virtuous Western hero sometimes, so I always tried to aim for my opponent’s gun hand whenever possible. It’s what the man with no name would have done (unless he’s dueling against Angel Eyes, that is!). 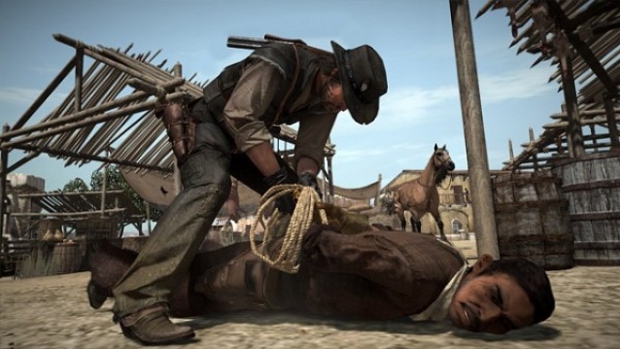 John Marston, with the rope, in the conservatory

Speaking of being honorable, I particularly enjoyed the option of using the lasso to subdue foes. It’s not always the best method, but I tried to use the lasso as often as possible, not only because it means I don’t have to kill as many people, but it’s also just really fun to use.

Bad guys can be lassoed, hogtied, and lifted onto the back of Marston’s horse to take them to jail kicking and screaming. It’s a bit trickier to capture bounties this way, because the player often needs to act quickly before the criminal’s pals appear to help him out. Plus it feels good knowing that it’s possible to solve problems non-violently. I’m always pleased when games give me these kinds of options.

Of course, if the player wants to be a bit more villainous with their lasso, that’s also a possibility. Marston can lasso someone while on horseback and drag them along behind him to kill them, hold on to the rope with the lasso around their necks to choke them, lasso their horses to try and buck them off a cliff, or even go the old-fashioned dastardly route and hogtie someone and then leave them lying on the train tracks to meet their demise. All you need is a bit of creativity to turn the lasso into a deadly weapon. 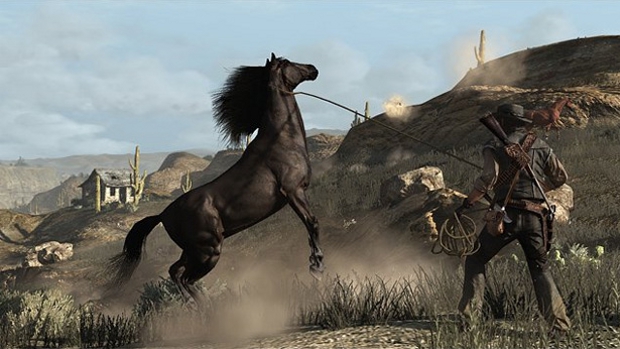 A horse with no name

John Marston wouldn’t get very far without a trusty steed, and luckily there are plenty of horses for him to choose from. While the horses in Red Dead Redemption may not be as memorable as, say, Epona or Agro, they still play a very important role as companions. The game provides Marston with his own horse early on, but it also allows him to steal other people’s horses or even capture and tame wild horses whenever he wants.

If a strong-looking stallion is spotted in the wild, Marston can use his lasso to reign it in and then jump on its back to try and tame it. This was my favorite method of finding horses. I tend to go for the solid white or solid black horses, which seemed to be kind of rare and challenging to tame, but they’re just so impressive-looking. I liked to pretend I was riding around on Shadowfax or one of the Black Riders’ horses.

Many players probably go through a lot of different horses during their playthrough, but I usually tried to keep my horses as long as possible. They tended to be more trustworthy and stronger the longer I kept them around, and I also couldn’t help but feel a sense of connection with my horse friends after a while. I hated to see them get hurt, especially the ones I captured in the wild since so much work went into finding them and gaining their trust.

For something that could easily be seen as a disposable item within the game, Red Dead Redemption sure did a fantastic job of making the horses feel alive and full of personality, something more than just a mode of transportation. 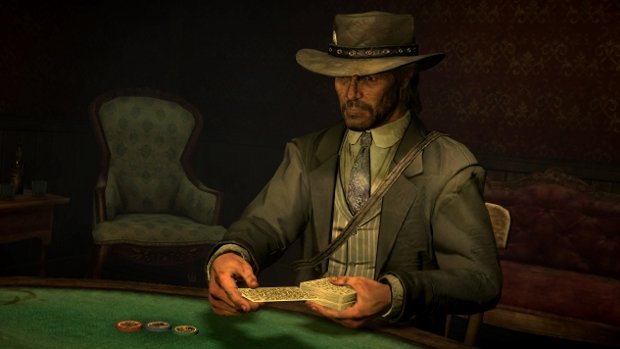 While the story and free-roam play of Red Dead Redemption was phenomenal, I also just could not get enough of the mini-games. Poker, liar’s dice, five finger fillet, horseshoes, arm wrestling, blackjack… I spent so much time playing all of these games in each of the settlements, trying to master them and win money. They’re all really fun and impressively fleshed out.

While I probably spent the most time playing poker, my best game was definitely liar’s dice. I’d actually never heard of it before playing Red Dead Redemption, but I quickly mastered it and raked in the cash. Horseshoes, on the other hand, was definitely not my game. I was terrible at aiming correctly, but it was still fun to learn.

Five finger fillet was also enjoyable simply because I would never want to try it in real life. I value my own hands, thank you very much, but I don’t mind the risk of butchering Marston’s body parts. Although it is kind of strange how his hands seem to be just fine even if he accidentally stabs himself repeatedly with a knife. I messed up so much that I’m surprised he still had fingers! 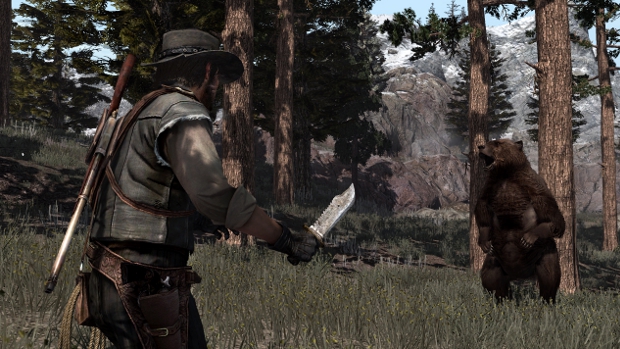 There is almost nothing more terrifying than hearing the snarl of a cougar while Marston is roaming the wilderness in Red Dead Redemption. Cougars are fast and powerful, they can easily kill in one or two strikes, and they’re very difficult to detect due to their tan color which blends in well with the sandy desert environment.

Usually, the player won’t know a cougar is near until they hear the loud, ferocious snarling. The sound always stopped me dead in my tracks, as I desperately tried to search for the location of the animal before it was too late. Then when they pounce, it’s a strenuous fight to the death as I try to avoid their attacks and get a few shots in as they’re running around. Even when I was being careful, they mauled me to death on more than one occasion. The cougars are no joke!

But even the cougars pale in comparison to the grizzly bears. The bears make a loud growling sound as well, but more often than not, I would see the bear before I heard it. I would just be minding my own business in the woods, then turn around and BAM… there’s a big old grizzly bear bounding straight toward me! It scared me every single time, and sometimes I’d even have to pause the game for a bit just to take a breather before confronting the animal.

The bears in Red Dead Redemption are arguably even more dangerous than the cougars. Sure, they’re slower, but they’re so powerful and difficult to take down that I found them to be way more frightening. And usually, once I killed one bear, two or three more would come running out of nowhere to avenge their friend. It was almost certain death once I found myself surrounded by multiple bears. Chill out, bears! I can only handle so much bear at once!