This entry is all about GoldenEye for the Nintendo 64. Feel free to share some of your own favorite things about the game in the comments! 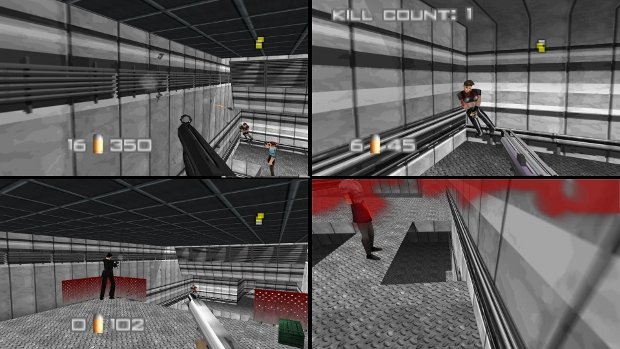 No guns, mines only, final destination

The main reason GoldenEye is remembered so fondly is no doubt because of the multiplayer. Four-player split-screen multiplayer was a big deal at the time, especially for a first-person shooter on consoles. It was actually my very first experience with a first-person shooter. I played GoldenEye so much with my brother, friends, and cousins that we started to develop our own rules and go-to gameplay modes which dominated our multiplayer sessions.

My absolute favorite thing to do in multiplayer GoldenEye is to play “proximity mines only.” Choosing proximity mines also comes with a few guns as well, but my friends and I played where we would only kill each other with the mines. Guns were only to be used to shoot mines, never other players. Of all the weapon types to choose from, and even of all the different types of mines to choose from, proximity mines were the most fun, in my opinion, due to how unexpectedly they can explode. Just toss a mine up on a wall, wait for someone to wander too close to it, and BAM!

“Proximity mines only” matches were especially tense because of how tiny the mines are, making them rather difficult to spot. If a player sees one before walking too close, they can carefully aim and shoot it down, or even toss another mine at it to make it explode. This could also cause a chain reaction of nearby mines exploding as well, engulfing the entire area in flames as players run for their lives.

I always tried to find clever places to hide mines, such as on the ceiling, on the floor, on an ammo crate, or on a glass wall (which I then shot, of course, leaving the mine floating in thin air). The element of surprise when someone walked into a room and suddenly exploded without seeing a mine anywhere in sight never got old. Sometimes a player would even respawn directly on top of a mine, dying in a dramatic explosion immediately after coming back to life. My friends and I would sit there and play with proximity mines for hours, blowing up and howling with laughter every single time. 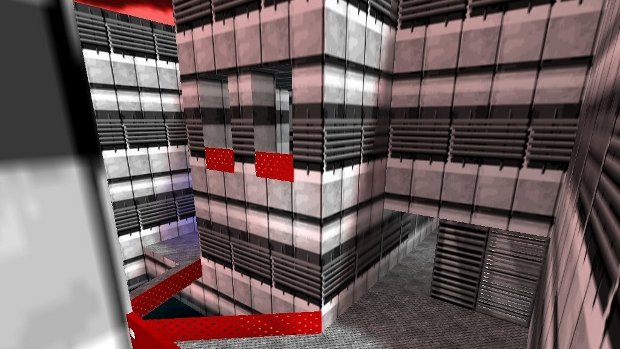 Speaking of multiplayer, the Complex stage was totally my jam. The Basement may have been the best layout for proximity mine matches, but I always felt the most comfortable running around the Complex.

The reason for this was because of the Complex’s secret hiding places. There are a few areas in the Complex where it’s possible to sort of phase through the walls, leading to small rooms where I could hide and wait for people to walk by. Somehow, very few of my friends knew about these hiding spots, so I could wait in safety while they wandered around the building desperately searching for me, then pop out and shoot them while their backs were turned. They would never see me coming, and would get so mad because I surprised them every time. I felt like a ninja.

The Complex also had some of the best sniping spots. Whoever managed to make it to the upper-level room in the middle first usually ended up racking up a ton of kills, since there were windows opening out to several of the main rooms all in one convenient location. There’s also a spot in the room with the spiral ramp where it’s possible to hide in the shadows and shoot people from below. I tried to take advantage of all of these different hiding spots to kill my friends from safe locations and confuse the heck out of them by staying out of sight. Of course, after a while my friends stopped picking that level because they knew I would win! 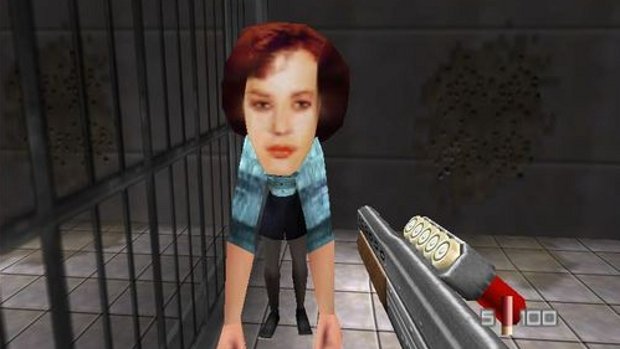 GoldenEye‘s cheat options were a ton of fun to play around with, and conveniently available to choose from a menu on the main screen. Paintball Mode was almost required to be turned on while playing with my friends. All it did was replace bullet holes with splotches of paint, but for some reason, it was the only way we played. I always liked to draw smiley faces out of the paint by carefully shooting designs onto the walls. We also played around with Turbo Mode occasionally, which greatly increases everyone’s movement speed. This made “proximity mines only” even more chaotic!

The weirdest cheat in GoldenEye, though, was called DK Mode. This cheat transforms all of the character models into grotesque shapes which are apparently supposed to resemble Donkey Kong, with huge heads, tiny bodies, and really long arms. The characters look so inhuman and ridiculous that it’s almost impossible not to laugh. I mean, look at Natalya up there. What even is she?

Combine DK Mode with Turbo Mode and my friends and I would be out of breath from laughter in no time at all! Crazy gorilla people zooming around at high speeds, their gigantic heads popping up out of nowhere with their freakishly long arms pointing a gun at me… it’s just too much. I’m so glad Nintendo published this game, if only because it gave us these hilarious, hideously deformed characters as a cheat option. 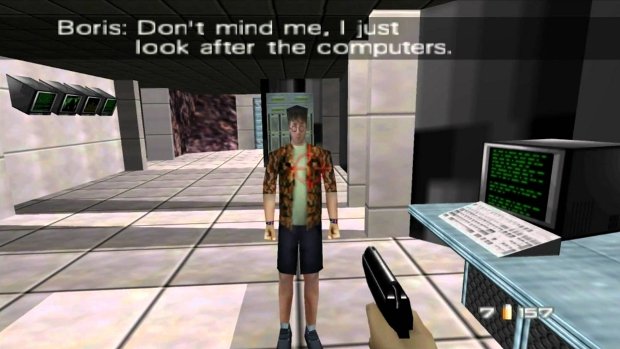 Everyone has their favorite Bond character to choose for multiplayer matches, whether it’s the classic choices of James or Natalya, the villainous Xenia or Jaws, or even the more generic Helicopter Pilot or Moonraker Elite if you’re feeling sassy. Just don’t go picking Oddjob, or else you’re probably going to lose some friends!

My favorite character has always been Boris. He may just be a boring old computer technician, but I loved his bold fashion choice of wearing a brightly colored Hawaiian shirt and shorts for combat. There’s no way to be stealthy while wearing a Hawaiian shirt, which means Boris is apparently confident enough in his abilities to attract the attention of everyone around him and still come out a winner (he is invincible, after all). Or maybe he’s trying to confuse everyone into thinking he’s a civilian. Or he’s simply clueless when it comes to combat situations. Whatever the reason, I love his style and wouldn’t want to play as anybody else! 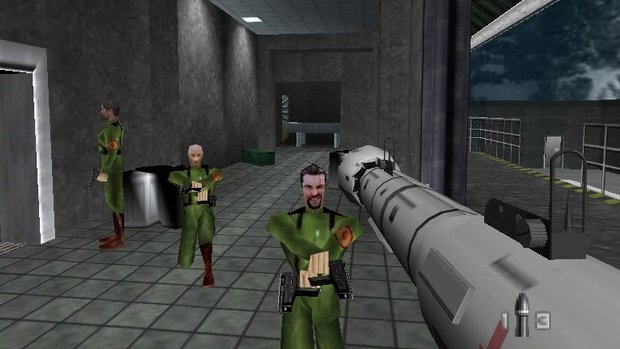 Far from the uncanny valley

One of my personal favorite things about GoldenEye is all the bizarre faces on each of the character models. They’re meant to look like the actors from the movies, and the enemy faces are meant to look like some of the staff at Rare. What they actually look like, however, is more like a cut-out of a real human’s face stretched over a cartoonish 3D model, which I suppose is a technically accurate description of how they were made.

The faces look so weird on the character models though, to the point that it’s honestly hilarious. The enemy soldiers’ faces are especially fantastic, because many of them have these exaggerated expressions that never change. So as they’re rolling expertly across the ground, shooting with a gun in each hand, and falling over in dramatic death animations, they always have that same silly expression no matter the situation.

I think my favorite face is the bearded guy with the crooked grin and what looks like a scar across one eye. I feel like I see him all over the place, and no matter what he happens to be doing at the time, his expression always makes me laugh. I wonder who that guy is? 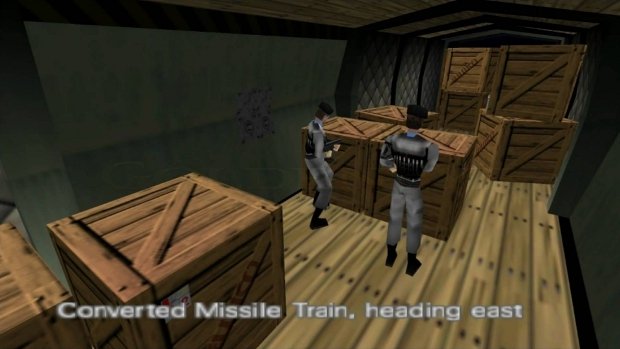 Spies on a train

The multiplayer isn’t the only fun thing in GoldenEye, of course. The single-player campaign is solid as well, taking Bond on missions throughout Russia and Cuba to visit all of the main locations from the film.

There are a bunch of neat missions, including Frigate, where he must rescue several hostages on a ship near Monte Carlo; Statue Park, where he has to navigate a maze of creepy statues in the dark; and the Streets of St. Petersburg, where he drives a tank through the city while trying not to kill too many civilians.

One of my favorite levels is the Train mission. This level was pretty difficult for a few reasons. It takes place almost entirely aboard a train, with Bond moving from the tail end up towards the engine, which means combat happens within confined spaces. Not only are the train cars small, but they’re packed full of boxes and swarming with enemy soldiers, so Bond has to be very careful or else he might end up trapped between a group of bad guys all shooting him at once. The most intense bits are towards the end when he has to move through the passenger cars, since soldiers could be hiding behind any of the multitude of closed doors. Somehow, a few enemies always manage to end up behind me!

The most difficult part of the level comes at the end, though. When Bond enters the final train car, he finds Natalya being held hostage by Ourumov, with Trevelyan and Xenia standing guard behind them. He must act quickly and shoot Ourumov before he can kill Natalya. The other two make their escape (I always tried to shoot them anyway, even though they always manage to get away), leaving Bond and Natalya trapped inside of the train with a short amount of time before it explodes.

The rest of the mission involves trying to find a way out of the train by using Bond’s handy watch laser to melt open a panel in the floor, while waiting for Natalya to hack into a computer in order to locate the Janus secret base. As usual, Natalya is slow as molasses and takes her sweet time cracking Boris’ password, leaving just a few seconds to escape the train before she blows up. This is life or death, Natalya, hurry it up!