This entry is all about Skies of Arcadia. Feel free to share some of your own favorite things about the game in the comments! 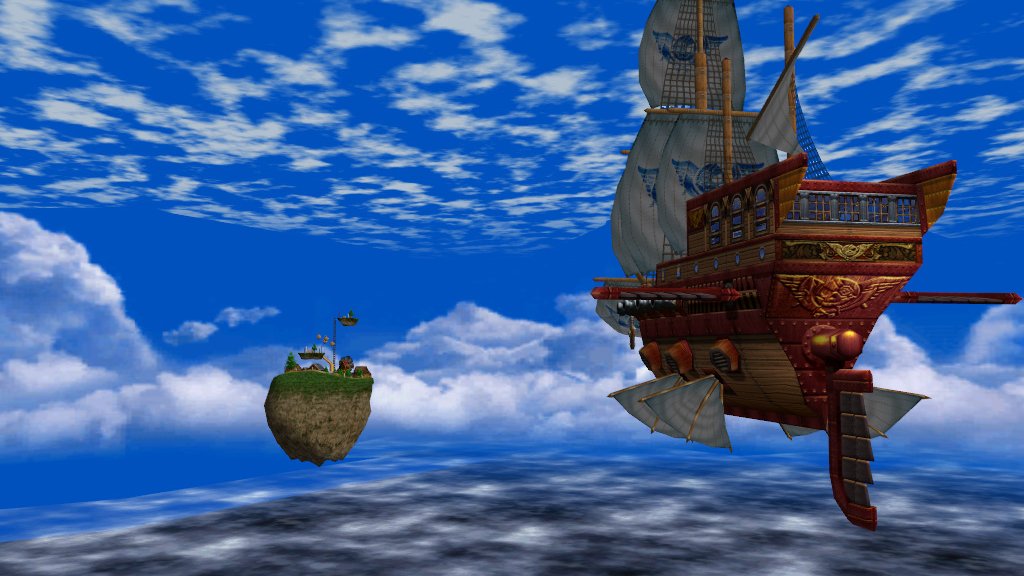 Skies of Arcadia has one of the most intriguing worlds I’ve ever explored in a video game. Civilizations of people living on floating islands, traveling between them via airships, with fish and other creatures normally associated with the sea flying around in the clouds, and entire sections of the world blocked off by powerful air currents and other obstacles that could tear ships apart. It was all very exciting and mysterious. I constantly wondered what secrets lay hidden on the other side of those currents, or past that ominous rift. Would it be possible to descend under the clouds, or perhaps fly even higher into the sky?

Eventually, Vyse gets to explore all of these places, satisfying every last bit of the player’s curiosity. Each new area discovered is a thrilling experience. Everything from the lost civilization of Glacia, the thriving society of Yafutoma that had been cut off from the rest of the world, the terrifying depths lying beneath the clouds, and the bright, open atmosphere above. I kept wondering what I might find next.

The most powerful moment for me was when they dive beneath the clouds and enter Deep Sky for the very first time, by flying through the huge maelstrom known as the Vortex. Entering the land beneath the clouds was unheard of for Vyse and his people, but they attempt it anyway in order to retrieve Fina’s lost ship, even though they run the risk of damaging their own ship in the process due to atmospheric pressure.

The area under the Vortex resembles a deep ocean abyss. It’s incredibly dark and murky, and almost looks alien compared to the bright, airy world above. The crew of the Delphinus must use sonar to navigate the area and locate Fina’s ship, but they also need to be wary of the giant bioluminescent creatures known as Raja which lurk in the darkness! There’s nothing more terrifying than the unknown horrors of the deep. 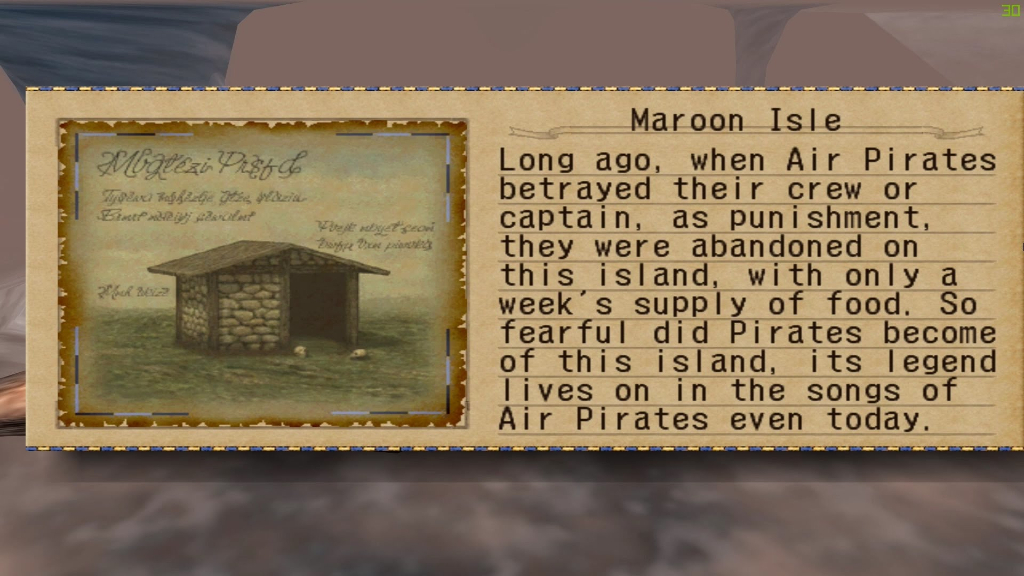 Wonders of the world

Continuing the theme of exploration, my favorite activity in Skies of Arcadia was flying around and making Discoveries. This involves searching the skies for hidden landmarks, rare creatures, forgotten shipwrecks, and other special locations which don’t normally appear on the map. Once Vyse makes a Discovery, he can then sell the information of its whereabouts to the Sailor’s Guild for cash. But he also needs to be mindful of other Discovery hunters, such as the famous explorer, Domingo, who might find them first if Vyse takes too long.

I’ve always been the explorer type while playing video games, keen on visiting every last location and wandering around all edges of the map to see what I might find. So games that try to reward that exploration really make me happy, and Skies of Arcadia is just about the perfect example of that with its Discoveries side quest.

It may not seem too exciting for some, searching for hidden objects which don’t really do anything except float there and are only good for making money, but I found it to be oddly captivating. In the world of the game, Vyse is the usually first person to have found these things. Lost landmarks like the Giant Throne spoken about only in legends, fabled creatures like the Ancient Fish which many believed to be extinct or pure fiction, shipwrecks that no one had been able to locate, slowly fading from memory. Finding things like that in the real world would be truly awe-inspiring, and it made me really get into playing the role of Vyse because I loved the idea of living that kind of life. 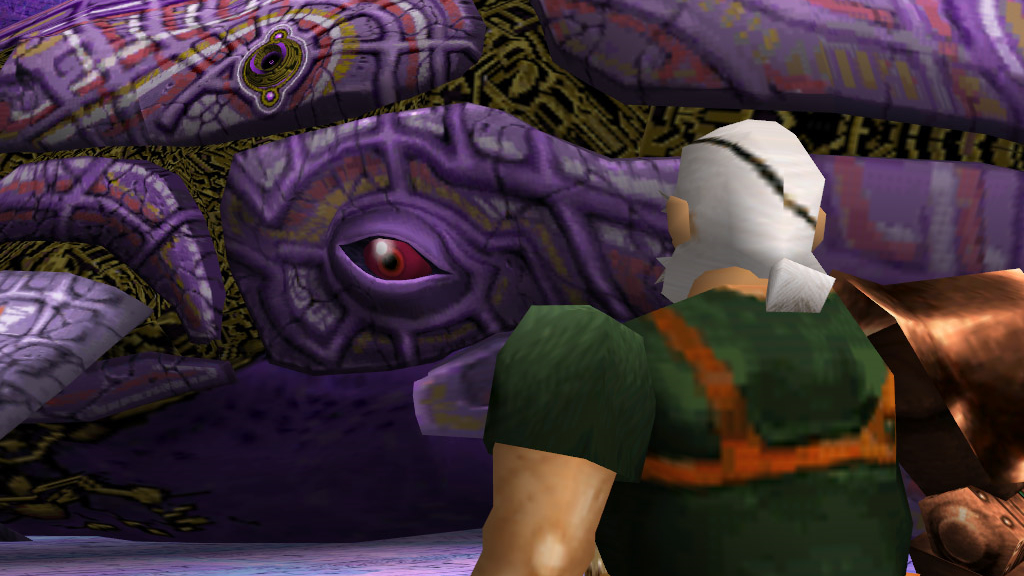 From Hell’s heart I stab at thee

The story of Captain Drachma and Rhaknam is heavily based on my favorite book, Moby Dick, so it’s no surprise that it left an impression on me. But even for those unfamiliar with the themes of Melville’s classic novel, Skies of Arcadia‘s take on the relationship between man and whale was quite powerful in its own way.

Much like with Captain Ahab and the white whale, Drachma had dedicated most of his life to hunting down the giant purple arcwhale, Rhaknam, who not only stole Drachma’s right arm from him but also caused the deaths of his crew, his wife, and his only son, Jack. The hunt eventually proves fruitful, when the crew of the Little Jack confronts Rhaknam and manages to spear it with the ship’s harpoon. Unfortunately, an enemy ship manned by Ramirez takes the opportunity to fire upon the Little Jack while they’re distracted with the whale, setting the ship aflame and forcing Drachma and crew to evacuate.

But at the last moment, as Vyse and the others are getting into the lifeboats, Drachma pushes them overboard. He remains on the burning Little Jack, dragged along by the harpoon stuck in Rhaknam’s back, presumably to his death.

Of course, that wasn’t the last we would see of Captain Drachma. Vyse and crew eventually meet up with him again in the most unexpected of places, the abandoned ancient city of Glacia. Rhaknam had apparently made the place its home, and fled to the icy fortress with Drachma in tow. Realizing that the whale had actually saved his life, Drachma had a sudden change of heart and decided to care for and comfort Rhaknam, who had been mortally wounded during the attack by Ramirez.

Vyse and friends arrive just in time to witness Rhaknam’s final moments, as the whale sings mournfully and sheds a single tear before passing on. Afterwards, Drachma decides to live out his days as a fisherman now that he no longer has to spend his life hunting down his arch-nemesis. Even though the death of Rhaknam is rather sad, it’s still heartwarming to know that the two lifelong enemies were able to make amends. It’s actually a much cheerier end than the one Captain Ahab received. 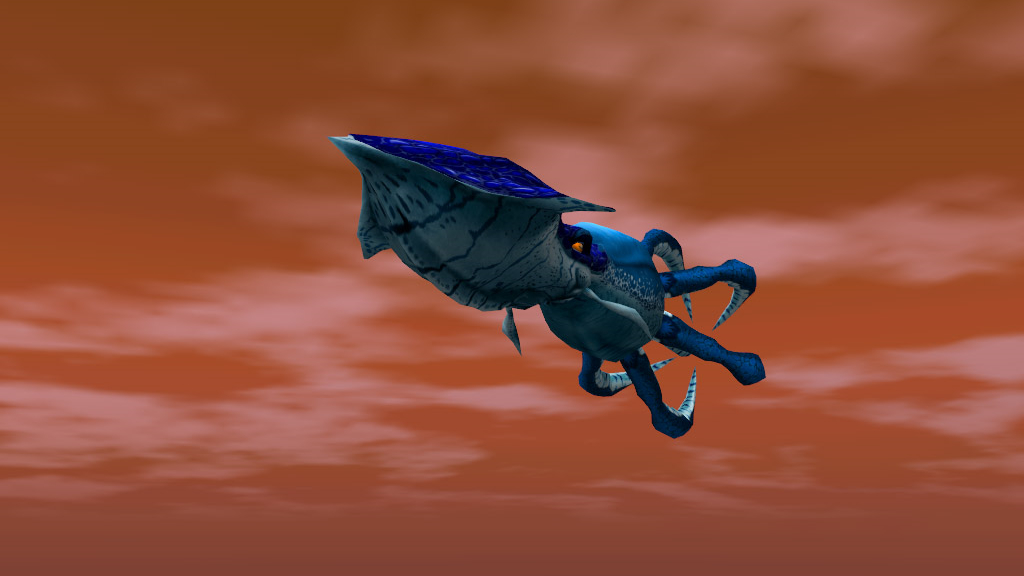 While most of the battles aboard the ship are fought against other ships, there are a few optional engagements with huge, frightening sky beasts which are particularly exciting. My favorite is the battle against a certain blue cephalopod. For a game centered around sailing (even though it takes place in the sky), you just know there’s going to be a giant squid encounter, and Skies of Arcadia doesn’t disappoint. Of course, any game with a giant squid is going to get a shout-out from me, because giant squids are awesome!

Once Vyse’s ship gains access to certain parts of the map, the crew might happen upon an open area with nothing but some floating rocks and an ominous Discovery called the Giant Squid Nest. Nearby lurks a beast named Obispo, a huge blue squid floating lazily through the clouds. Flying up to Obispo, who is larger than the Delphinus itself, will initiate an optional ship battle.

Obispo will attack the Delphinus with huge bursts of ink, but it’s probably no match for the ship’s cannons. Cause enough damage, and the giant squid’s tentacles will begin to fall off one by one, sinking to the clouds below. Upon death, the animal actually bursts into flames and falls out of the sky. I almost expected it to go out in a glorious explosion! 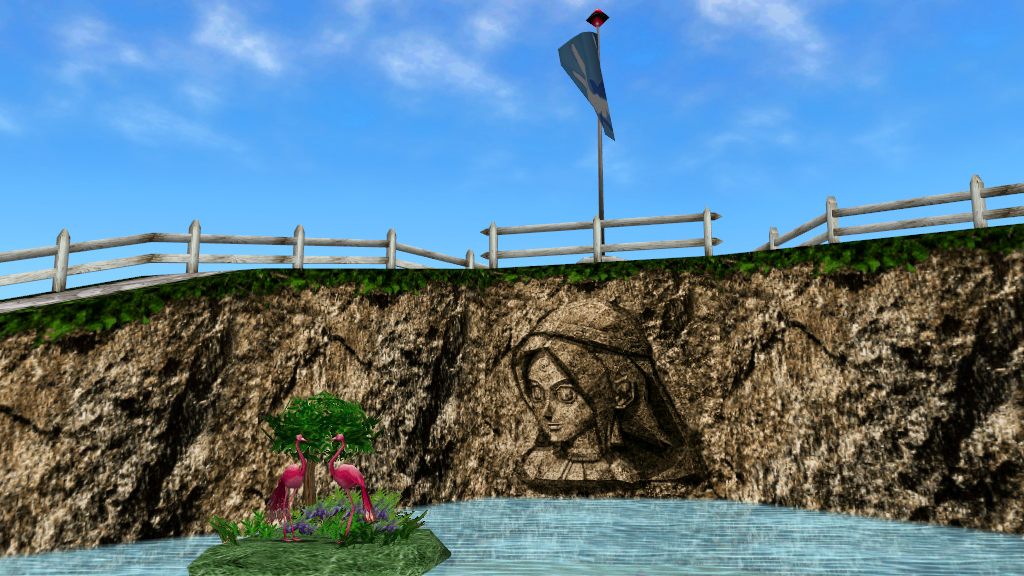 At one point in the story, Vyse finds himself stranded on a desert island where he is forced to figure out a way to survive while rebuilding a lifeboat to escape. This island, called Crescent Isle, later becomes the base of operations for Vyse and his crew. A small settlement is built for crew members to live while not aboard the Delphinus.

But the coolest thing about Crescent Isle is that the player actually gets to customize it to their liking. Players can choose which buildings to upgrade, decide who should rebuild them (which changes the architecture), add decorations like fountains or cliffside reliefs, bring animals to the island (like fish, flamingos, alligators, and pandas), and pick a flag to represent the crew.

I had Kirala construct most of the buildings in the exotic Yafutoma style, with fish and pandas to liven things up. I decided to forgo the cliffside reliefs, because having a character’s giant face looming at everyone seemed kind of unsettling to me. I also went with Fina’s flag design, which features a super happy flying dolphin, because duh.

I loved being able to give the island my own unique flair; it made the place actually feel special to me, rather than just some rock that I could return to every once in a while. I wonder how many others spent as much time designing their islands as I did. 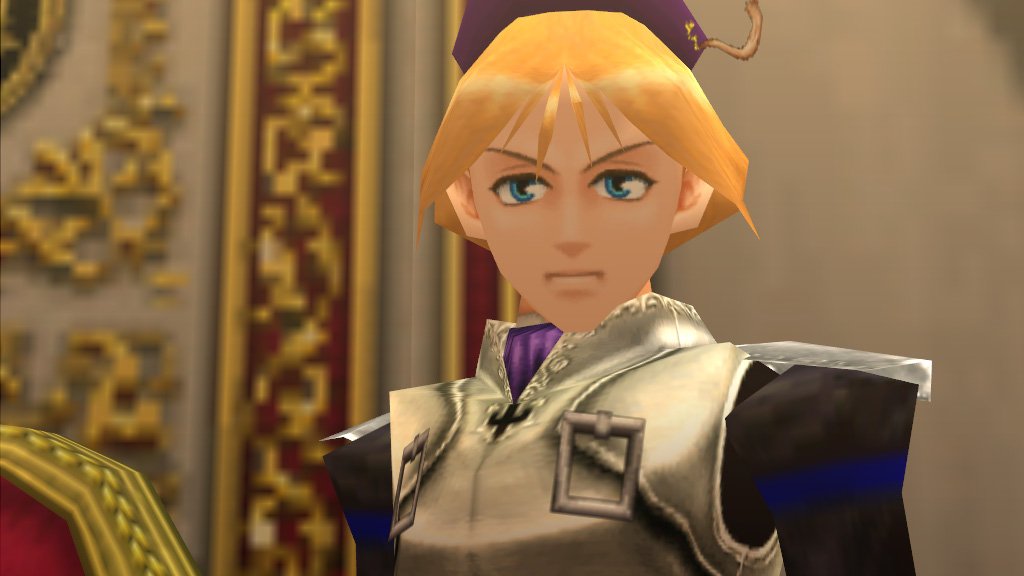 Skies of Arcadia‘s battle system featured Super Moves, which were special attacks that had short cinematic sequences to go along with them. They were all pretty cool. Vyse had a bunch of pirate-themed moves, Aika’s were named after the Greek alphabet for some reason, Fina called upon the power of the moons to help them out, and Drachma straight up body slammed dudes.

But my favorite Super Move belongs to Enrique. Upon activating his final move, “The Judgement,” Enrique summons a huge colosseum full of roaring spectators, announcing, “Your trial shall be swift and just!” as if this is a perfectly normal thing to just suddenly appear out of nowhere. He then calls upon a dragon-shaped sigil on the ground, which opens up a portal in the sky above him to release an actual dragon. The silver beast spirals through the air before flying face-first into the enemy, slamming into them for massive damage as Enrique yells, “Face your punishment!” And then he ends the attack with a confident flourish of his sword.

Wow, Enrique. Way to make everyone else look bad!