This entry is all about Team Fortress 2. Feel free to share some of your own favorite things about the game in the comments! 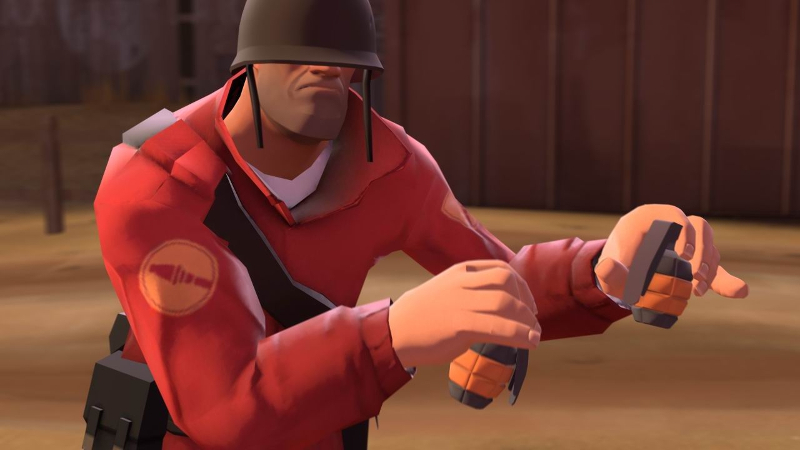 The first thing that grabbed my attention in Team Fortress 2 was its eccentric cast of characters. The Heavy caught my eye first of course, because how could he not? He’s so big! I immediately took a liking to him due to his goofy, yet menacing, personality and his over-the-top accent. And every other character was just as awesome, from the drunken Scottish Demoman, the psychopathic Australian Sniper, the loudmouthed, arrogant Scout from Boston, and the enigmatic Pyro.

Surprisingly, my favorite character initially looked the least interesting to me: the Soldier. He basically looks like the stereotypical type of military character I would expect to see in a first-person shooter, albeit with a slightly cartoonish flair. He was probably the last class I tried out for this reason, but as soon as I started playing as him, I had to admit that the rocket launcher was a hell of a lot of fun to use and I was actually getting more kills than usual.

I also quickly learned that I had seriously misjudged his character. While he is obnoxiously patriotic and aggressive, it becomes quite clear that he’s meant to be a satirical twist on those types of macho military men. He likes to shout “maggots!” and refer to his teammates as “ladies,” but many of his spoken responses reveal that he’s not quite the smartest cookie (“Ich bin I just kicked your ass!”) and he might actually be slightly unhinged (“I am going to enjoy killing each and every one of you sorry sacks of scum!”). This is made even clearer in the Meet the Soldier video, where he lectures a bunch of decapitated heads about Sun Tzu, while somehow getting him mixed up with Noah.

His backstory, which was hinted at in the comics, just made me love the crazy guy even more. As it turns out, he’s not actually a real soldier. He was rejected by every branch of the military during World War II, but due to his rather intense patriotic attitude, he decided to teach himself how to use weapons, bought a plane ticket to Europe, killed a bunch of Nazis, and awarded himself with medals that he designed on his own. Then he continued to call himself a soldier and tried to convince everyone that he really was in the military. It’s a truly inspiring story about never giving up on your dreams, no matter how insane your solutions might be. Shine on, you crazy diamond! 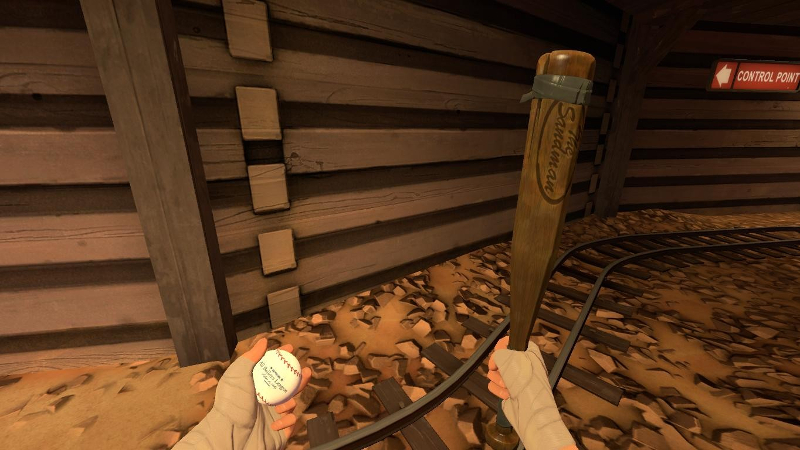 Team Fortress 2 has some of the best weapon variety I’ve seen in a shooter. Every character has their own unique arsenal to choose from, ranging from standard classics like the miniguns and rocket launchers, to bizarre and unexpected items like ham sandwiches and jars of piss.

Everyone has their own go-to loadouts for individual characters, which are usually varied enough so that no two characters in a single game are using the same weapon combinations. It really helps to keep matches interesting, since you never know what strategies the enemy might try using depending on their loadout. I have a few staples myself, including my Battle Medic with the Crusader’s Crossbow in hand, my Pyro with the Degreaser + Axtinguisher combo for easy melee kills, and my Soldier who’s always equipped with the Black Box and Equalizer, even though the latter is a much less impressive weapon than it used to be.

But the one weapon that I have never swapped out since I found it is the Scout’s Sandman. This melee weapon is a simple wooden bat that comes with a baseball. Scout can either bash heads in with the bat, or use the alt-fire to whack the baseball at a target, temporarily stunning them. It has been nerfed and buffed many times since it was first introduced, but has nevertheless remained my favorite weapon to use.

I used to think it was super difficult to aim the baseball correctly in order to hit an opponent, but I’ve used the Sandman so much by now that I almost never miss my mark anymore. Every successful stun I inflict feels so satisfying. Sometimes I get so caught up in it that I forget to switch back to the Scattergun to finish off the dizzied enemy and instead resort to hitting them with the bat a few times and then running off a distance to try and stun them again. Of course, it’s even more satisfying to score a kill with the ball, hitting them in head so hard that they fall over dead. It always happens when I least expect it, and it makes me grin every single time. 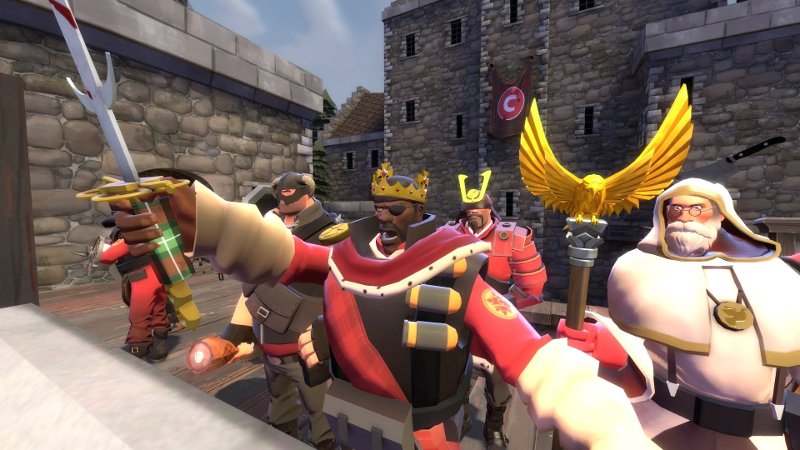 There can be only one

Trying out all the different weapons is a lot of fun, but my favorite game mode actually restricts the majority of them. In Medieval Mode, players can only use melee weapons, as well as a few other thematically appropriate ones such as bows and crossbows. This mode is only available on one map, DeGroot Keep, but it’s so enjoyable that I don’t even mind playing the same map over and over again.

There’s just something fundamentally entertaining about the melee weapons in Team Fortress 2. Having a game mode built entirely around them is genius. Whether I’m raking people over the coals with the Back Scratcher, going crazy with one of the Scout’s bats, collecting heads with the Eyelander, or getting a “FISH KILL!” with the Holy Mackerel, I’m having a good time!

The heavy hitters in Medieval Mode are definitely the Demoman with his sword and shield and the Sniper with bow and arrow (there are even lit torches scattered around the map to light the arrows on fire!), but even so I tend to cycle through the entire team rather than just stick with those two. After all, the Heavy’s Killing Gloves of Boxing are nothing to laugh at, and I’ll take any opportunity to play Battle Medic since the Crusader’s Crossbow is one of my favorites.

Another neat feature of Medieval Mode is the chat parser which (somewhat clumsily) translates all text chat into Ye Olde English. A friendly “Hello” might become “Well met, good sir!” and anyone calling you an idiot might refer to you as an “ill-bred, witless jackanape” instead. It’s pretty humorous, even though it can cause the chat to become a load of nonsense rather quickly. But who needs reliable chat options in a team-based shooter anyway? 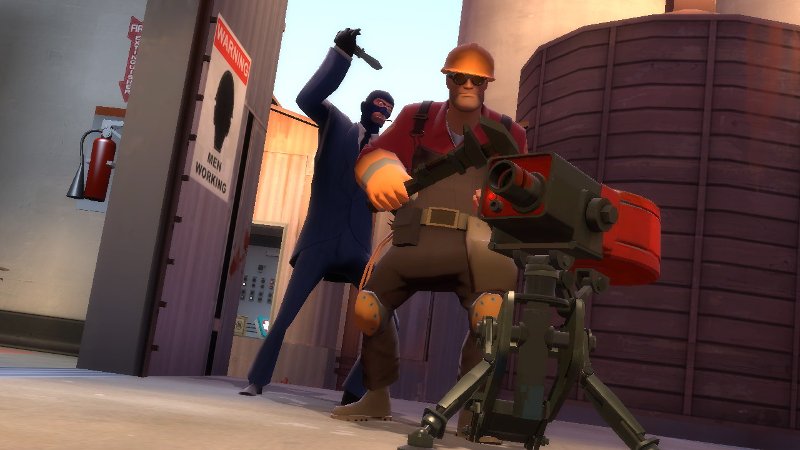 The Spy is such an interesting character to me. His playstyle is typically not what I go for in multiplayer games. I usually like to be in the action, shooting and fighting out in the open and making my presence known. But to be a competent Spy, I have to do the complete opposite.

Yet there’s something surprisingly thrilling about hiding in the shadows as a Spy. He’s almost never a part of the action. He’s either disguised as the enemy and trying to mimic their behavior to blend in and remain unnoticed, or he’s hidden under the veil of his invisibility watch, moving from shadow to shadow and trying to stay out of sight. One wrong step could alert the enemy to his presence and he’s doomed. It gets my heart racing even when I’m just standing there doing nothing, waiting for my Cloak and Dagger’s invisibility meter to recharge so I can move again as enemy Soldiers and Pyros are running past me.

And then there are the backstabs. Pulling off a successful backstab is probably the best feeling one can have while playing Team Fortress 2. Simply backstabbing a single Heavy when he least expects it feels wonderful, but getting multiple backstabs at once can make me feel like a god. Whether I’m taking out a Medic followed by his confused Heavy partner, or a handful of unsuspecting Snipers all perched in the same area, or an entire mob of enemies who are too busy attacking to check for Spies. It’s such a rush of adrenaline, it makes me feel unstoppable! Well, at least until the Pyros find me… 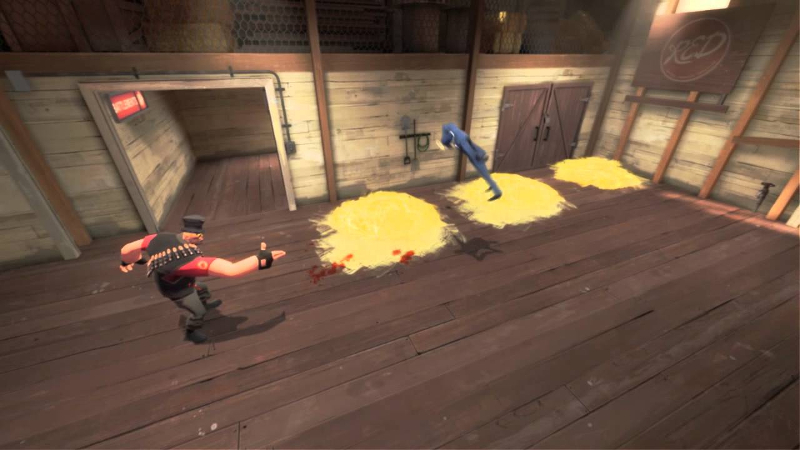 Salt in the wound

I love the taunt kills in Team Fortress 2. Every character has at least one taunt which can one-hit KO an enemy if they’re standing close enough. They can be difficult to land, since the animations take a while (especially Scout’s) and you usually have to be almost touching your victim. But successfully pulling off a taunt kill feels pretty amazing, because you just know your opponent is sitting there thinking, “Goddammit, really?!” It’s an easy way to make people salty.

All of the taunt kills are great, with Scout charging up to hit a home-run, Engineer bashing heads in with his guitar, Pyro performing a Hadouken, Demoman decapitating dudes with his sword, Medic attempting a spinal tap with a bonesaw, Sniper stabbing people with arrows, Spy practicing his fencing technique, and Heavy simply pointing at people to death.

But my favorite has got to be Soldier’s taunt kill, Kamikaze. If Soldier taunts while holding either the Equalizer or the Escape Plan, he’ll throw the pickax over his shoulder, crack his knuckles, grab one of his grenades, and pull the pin. He keeps holding onto it as it explodes, killing himself and any enemy standing near him. It’s the perfect taunt for such an insane character. I actually use it all the time, just because it makes me laugh so much. Sometimes I’ll Kamikaze while waiting for the round to begin, or after claiming victory over the other team as a sort of twisted celebratory gesture. I don’t know how much my own team appreciates it, but I find it amusing. 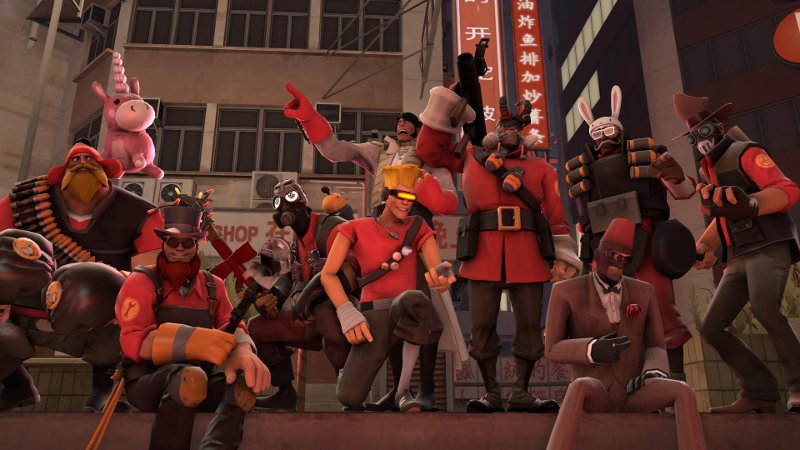 Of course, everyone already knows what really makes Team Fortress 2 great: hats! You might think I’m joking, but I actually really do enjoy collecting them. I used to get so jealous when I’d see another player wearing a really cool hat, and hat drops were so rare that I didn’t have any of my own for a long time. I still remember my very first hat drop, the Mining Light for the Engineer, and how excited I was when I got it. It’s not even a very interesting hat, but I was still psyched to put it on my Engie.

Actually, most of the hats that I found were pretty lame, with the exception of the Handyman’s Handle, a plunger that my Pyro sticks on his head. Even so, every single hat drop I received was an exciting moment. And I still enjoy seeing all the goofy things other players have on their heads, often wishing I could be so lucky as to find them myself.

In fact, Team Fortress 2 remains the only game to this day that got me to purchase something through microtransactions, and of course it was a hat. I decided that I absolutely NEEDED to have the Officer’s Ushanka for my Heavy, and since the chances of finding one randomly are astronomically low, I went ahead and bought it. And I regret nothing, because my Heavy looks totally amazing in his fluffy Russian hat!