Harmonix has thought a lot about how they’ll welcome players to Fantasia: Music Evolved and they’ve decided to add a partner apprentice that will serve as a sort of game guide. Her name is Scout, a talented but impatient apprentice that works alongside the player to fight the force called the Noise.

Scout is fully voiced and animated, and appears as the game begins to help kick off the story. She seems to have a lively personality, wearing a star-covered ball cap and street clothes. Players will cooperate with Scout to save Fantasia. 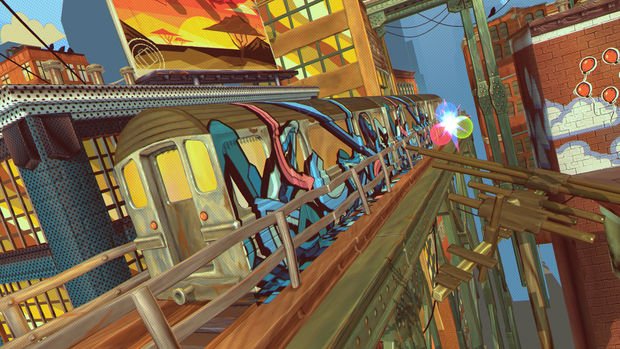 A new hands-on (hands-off?) session had us playing a newly revealed area called The Neighborhood. The scene features urban street art, psychedelic colors, and has a bit of a comic book vibe. Harmonix said that it was inspired by artists like The Who, and by songs like Cee Lo Green’s “Forget You,” among others. The area starts out pretty quiet, but as you move the Muse 3D cursor around to manipulate zones, it starts to come alive, first with radio signals, and later with music that you’ve unlocked.

A play through of “Forget You” had us layering rock guitars and keyboards with Cee Lo’s original vocals from the hit song. Later, we chopped up drum loops in a composition spell, and created a keyboard solo by waving hands in another. 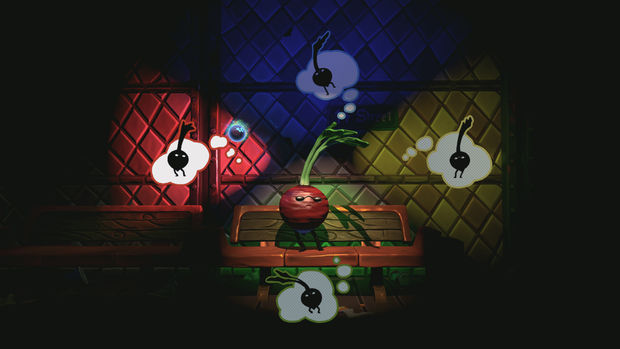 After this, a diversion into a subway stop of The Neighborhood had us doing a freestyle sequencing section with singing vegetables. A turnip and beet had their own vocal tracks, while a carrot dropped a beatbox track. By moving between the vegetables, the player can jam out to create their own loops, making their own track. This performance is then added back into The Neighborhood as background music. In this case, the trio was added to a train that came back around to the scene regularly.

A few new tracks for Fantasia: Music Evolved were announced during our session. Depeche Mode’s “Enjoy the Silence” will be a part of this stage, as will The Police’s “Message in a Bottle.” On the classical side, “The Nutcracker” was pulled from the original Fantasia.

I tried my hand at Drake’s “Take Care.” Things got pretty interesting with alternate music tracks that underscored the entire song with acapella background vocals and beatbox rhythms.