Final Fantasy XIV's Eureka is a step in the right direction, but more work needs to be done

It sure beats out old relic quests

Although the Eureka zone of Final Fantasy XIVarrived roughly a month ago, it’s taken me a really long time to process just how I feel about it.

Billed as a return to old school Final Fantasy XIsensibilities, the landscape has drastically changed as the players took control of the activity. What was once thought to be an enemy-after-enemy chain grind became a notorious monster hunt train.

Let’s take a look at how it all went down and where Square Enix can go from here.

For those of you who don’t play A Realm Reborn, let’s talk a little bit about the relic questline and how it’s evolved over the past several years.

Initially, the relic questline was a sort of endgame activity that players could do to nab a really cool, often iconic weapon from the Final Fantasy lore — you know, like the Curtana and Yoshimitsu swords, or the Gae Bolg spear. It was an exciting moment when you finally forged your purple weapon with the help ofGerolt Blackthorn, after making your way through several endgame battles to actually forge it. The next step, Zenith, required a small amount of currency grinding and gave your newly acquired gear a cool little glow. You could repeat this questline for every job in the game, and it was a small little optional thing I enjoyed doing. Then the real grind came.

The idea was sound. Final Fantasy XIV‘s team wanted players to continue upgrading their weapons throughout the course of the 2.0 edition (or future expansions), allowing them to sort of grow with their weapon they’ve had since the start. The thing is, the implementation of this concept was intentionally intertwined with the concept of extreme grinding, to the point where players had to really “earn” it. As a hardcore MMO player I get it, but the team went overboard. One grind, as was the meta at the time, boiled down to running the same exact dungeon over and over and ending it early (only to head right back in rapidly) because it was the most optimal way to earn credits to unlock the next relic step — that was eventually patched.

Another step forced players to grind FATEs (read: open world events that pop on a timer) all across the world for a very small chance to earn Atma crystals, which were used to upgrade your weapon to the next step. Again, a very cool idea, but the drop rates were so abysmally low that it could take anywhere from 50 hours or less to 200 hours or more to complete it. Another grind involved hoarding pricey materia, another was a repeat of the dungeon grind concept but merely involved trials (boss fights), and so on.

This unfortunate process was repeated in Heavenswardwith little innovation (a few steps were almost exact carbon copies of the steps in 2.0), and that’s around when the playerbase got fed up with it. Personally I was at my breaking point after completing the 2.0 questline with just one full job (I finished Atma on three and dropped two immediately after) and just didn’t have it in me to do the same for 3.0. A lot of folks felt that same fatigue — the team decided they were going to do something completely different for the Stormbloodrelic questline, and work began on the Eureka zone. Following delay after delay, Eureka finally came in patch 4.25 in mid-March 2018, and boy was the reaction polarizing.

Eureka Anemos, themed after the wind element and the first Eureka zone, looks rather inviting. It’s an entirely new activity, with brand new lore (as subtle as it is), which is above and beyond the previous strategy of tethering a relic quest to existing content. It also offers relic armor, something that hasn’t been done before, just in case you want more than a single weapon for your job of choice. The zone itself contains its own questline with scavenger hunt-esque requirements, a new elemental wheel that attempts to provide some form of strategy, as well as two teleportation points to get around quicker. It’s a fully-fledged hub and a lot of work went into it. 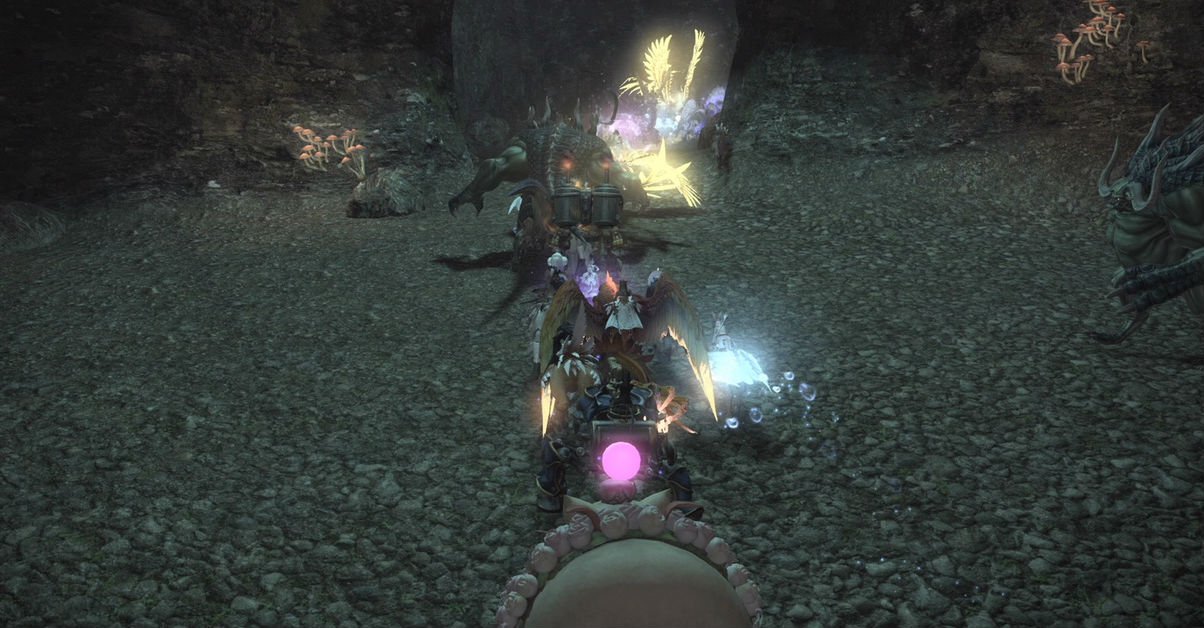 Once you’re actually in Eureka that sense of wonder is brought down to reality. Initially you’re going to be chain-grinding enemies, hopefully with a group, so you can quickly and more efficiently cut through the crowds to earn as much XP as quickly as possible. Players start over at level one (progress is shared across one character and multiple jobs), they cannot mount until they reach a certain level milestone, and they suffer an XP penalty if they die and are not resurrected once they reach a specific level. At first it seems like an insurmountable and endless task if you aren’t in the right group, but players have found a way to bypass this system entirely — NM (notorious monster) trains.

As players found out on day one, leveling up a bit (roughly to seven) and then grinding out Eurkea’s FATEs (read: small boss battles) was the easiest way to basically accomplish every goal you need. NMs provide tomestones (endgame currency), crystals (the main ingredient required for leveling up relic weapons and armor), and lock boxes, which grant random rewards from a cosmetic T-Rex mount to valuable grade VI (the highest currently) materia to slot into gear. There’s no need to grind out regular enemies for slow-going crystals, as you can ignore them entirely in favor of big reward NMs.

See that picture above? It’s called the “NM train,” a line of players who are moving from NM to NM as efficiently as possible, which is basically what Eureka has become. Players are so good at gaming the system that they’ve developed their own trackers — which are created instance by instance and guide players through the next NMs that are ready to spawn. Right now all you do is zone in, shout for a group, and follow the train. It’s less of a grind than before, but that doesn’t mean it isn’t a grind.

While it’s impossible for Square Enix to predict just how insatiable the community would be, they basically drove it to exploit the system by making the general Eureka flow so rote. Games like Guild Wars 2 have pivoted away from the “us versus them” world grind entirely, allowing players to tag mobs and still contribute despite being in different parties. Eureka could greatly benefit from this, forging bonds with players across the entire zone just like how NMs have bonded them together by force.

Although the system has its faults, I actually really like the idea of going into a unique zone and completing hunts (my all-time favoriteFinal Fantasyactivity)with a group. Folks are incredibly helpful, doling out rides for lower level players with tandem mounts and providing raises for dead newbies whenever possible. I’ve done the same for strangers, and have even ran across an entire map, missing out on a battle just to make sure someone didn’t incur a resurrection penalty. I’ve enjoyed it enough to complete threeAnemosweapons and two full sets of armor without going super hard, so it’s doing something right. In that same amount of time I’d be lucky to finish a full Atma set in the Realm Rebornrelic quest.

Eureka Pagos, the snow zone and continuation of the saga, is expected to arrive sometime within the Final Fantasy XIVpatch 4.3 cycle that begins near the end of May. The development team has no doubt been at work on Pagos for a while and likely won’t be able to make any sweeping changes suggested by the community, but I really hope they’re able to fit in some small tweaks here and there and keep people interested and elevate Eureka to reach its full potential — one of the most robust endgame activities to date.