First hands-on of Middle-earth: Shadow of Mordor won me over

I had absolutely no expectations for Middle-Earth: Shadow of Mordor. I’ve never played any of the franchise games, and I knew very little about the upcoming title. But my first hands on was a very pleasant surprise. A mere 45 minutes of play of its sandbox game got its hooks in me and now I’m totally sold.

(For the full rundown, see our initial preview on Shadow of Mordor.)

One does not simply walk into Mordor for the first time without understanding of the game’s structure. Ranger for the kingdom of Gondor, Talion, is well-equipped to do battle Batman-style chops and new Wraith powers. But he can’t do it alone. He’ll need to influence Orcs to take Sauron’s army at its heart, turning it inside out. So while this is a third-person action sandbox, there’s an ongoing strategy game tied to your choices. Using the power of Wraith you’ll build up, orc by orc, until you have own own sizable army. Or tear Sauron’s army down, orc by orc, until you can properly take it down.

What’s interesting is that you’re completely free to decide how you’ll go about achieving this ultimate goal. Every enemy in this huge world can be a part of your army if you work hard enough at it. A screen with orcs laid out by rank lets you dig down and gather intel so that you may use its strengths and weaknesses to your advantage. You can mark any enemy from this screen and then jump into the world to hunt them down and use them as you will. 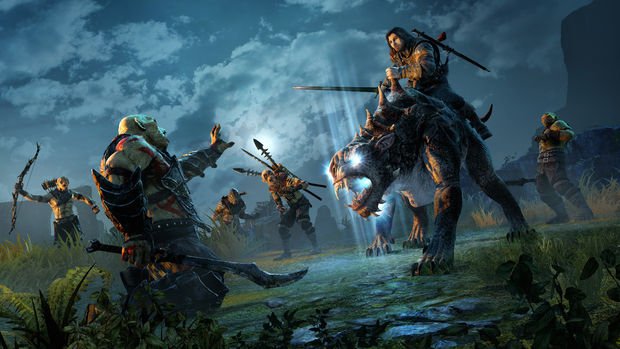 I started out by trying to take out one of the bodyguards of a captain that I wanted to control. Hunting him down could have been easy, but he was completely surrounded in an orc camp, and one mistake could have the entire camp coming down on me. Using fast travel, I got close to the camp’s gate, letting me use some of my Wraith powers to scan through walls to find my target and mark him. Going in, I used stealth to sneak around the walls of the camp, staying close to the leftmost mountains, moving as slowly as possible. Hidden in the grass, I happened upon a platform where my mark just happened to be taking a break, urinating against a camp wall. I thought it would be a perfect time to take him out. I used stealth to sneak up behind him but my takedown attempt was unsuccessful, which had him sounding the camp alarm to warn of an intruder.

Suddenly I was running for my life, using Shadow of Mordor’s free traversal to get as far away from the camp as possible. I had several on my tail, so I took advantage of verticality to hop over the camp walls, scramble up in the mountains, and let my health uncover. Eventually I got back in and found the target mostly alone. Instead of sticking to my original plan of capturing him, I killed him on the spot. That felt good.

I picked another bodyguard from the army screen with the hopes of taking over his mind with Wraith powers to use him against his boss. This hunt was a bit easier, and it let me try out Shadow of Mordor’s Batman-like combat system. Hard hits, combos, blocks, and parries are all here, but the Wraith powers add another dimension with ranged and psychic attacks. All of this at your disposal makes Talion feel like a walking army. It’s no problem for him to take a small group of orcs out on his own, and with careful approaches and proper use of the Wraith powers, he could probably take out a sizable unit alone. 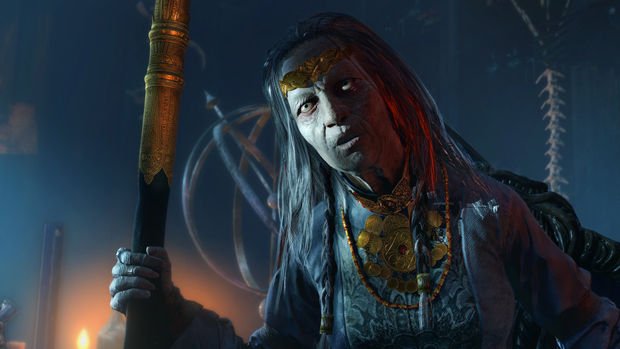 This bodyguard lived — I took his health down just enough to be able to dominate him, making him a follower. From there I was able to command him to go after his boss, the war chief, my ultimate target. I followed my new underling to oversee his mission and saw that while he was strong enough to make a dent in his boss’ life bar, he would die if I left him alone. So I joined the fight and took him down to next to nothing. But instead of killing him, dominated him as well, saving him for an even bigger takedown later. 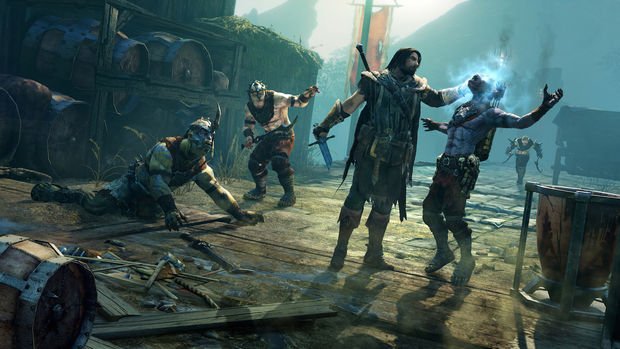 A Monolith rep told me that it’s possible to take a large group of captured orcs together to form a small army to take out a bigger target. Or you could just use their bodyguards to help you kill them all. Or, if you’re good enough, use stealth and/or brute force to take them all out on your own. It’s totally up to the player on how to approach the overall goal, with missions opening up along the way to let them create their own stories. Ridable beasts, customizable weapons, and a world so big that I can’t imagine seeing it all will make this one heck of a sandbox to get lost in.

If you’re a fan of Assassin’s Creed‘s open-style sandbox play, know that this takes it and turns it up a few notches with better combat and an underlying strategy side. Again, less than an hour of play had me wanting more.

Look for more coverage leading up to its release worldwide on October 7, for PS4, Xbox One, PS3, Xbox 360, and PC.