Action game for PS4 and PC

Ninja Theory has felt like a mercenary of late. Enslaved didn’t sell as well as it should have (neither did Heavenly Sword), and so the last five years has been spent 1) making a mobile game for EA-owned publisher Chillingo, 2) trying to reboot Devil May Cry for Capcom, and 3) working on Disney Infinity characters.

“We’ve been lucky that we’ve been able to survive is the reality,” Ninja Theory’s Dominic Matthews told me at gamescom. “We came off the back of DmC at a time that was very different for the console space.” The team tried to pitch a “big AAA blockbuster, $60 game that didn’t get anywhere. The type of games we make can’t be sustained in the AAA blockbuster market anymore.”

“We need to sell about 300K units to make its money back, which won’t be easy,” but it’s a more preferable situation than “needing to sell 5 million.”

Hellblade is the studio’s first independent game, Matthews reminds me. The digital-only PS4 and PC release is being handled by a “small team of 15 people,” including recently-returned Heavenly Sword art director Hugues Giboire, who want to “create something with all the creative spirit of indie development, but still deliver AAA production values.”

The lack of a publisher also means Ninja Theory can open up its process into indie-staple “transparent” development, updating fans directly so people can “see the game evolve.” That’s why it was playable this week, despite it being “kind of a lot earlier than we’d normally show it.” 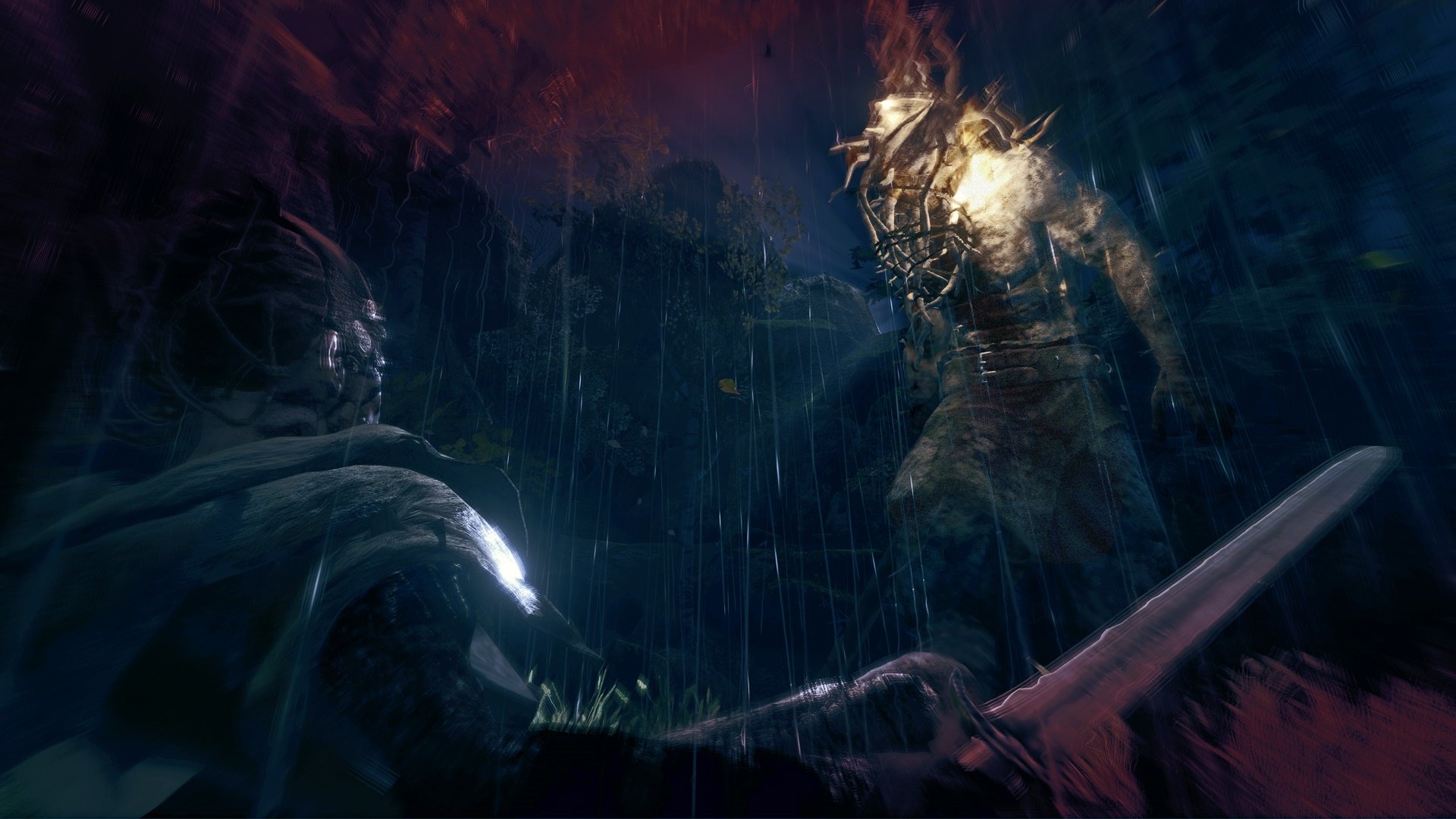 Hellblade is the story of Senua, a Celtic warrior suffering from mental illness that manifests in her world. Her state of mind affects the world around here. The weather gets gloomy, rainy, sky full of lighting and rolling thunder. Beefy, imposing enemies come menacing in one at a time. Working with mental health experts and sufferers, the team is still learning about the “diversity we can bring in with the psychosis element,” “different visualizations” based on “the range of experiences people have.”

But these are not mere hallucinations or effects, as is common in games as recently as Far Cry and Batman. Ninja Theory is focused on “representing this as the reality, because, to [Senua], this is reality. There’s no switch to turn it off and on; everything is real to her.”

It’s an interesting contrast to the frequent stylistic separation between real and unreal. The first Hannibal Lector film, Manhunter, uses excellent visual affects to distinguish how its villain sees the world, versus the objective film reality. The recent TV adaptation does the same with its hero. Here, though, playing as Senua, there is no objective reality to turn to, just hers.

Given Ninja Theory’s past, this then manifests itself more on the nose as a literal “fight your demons,” because it is still a third-person action game (there was a light puzzle in the build I played, too).

I enjoy the focus on one-on-one combat, which restricts the camera and brings it in tighter because you, as the player, don’t have to protect ya neck worry about additional enemies coming in from all sides. In combat there is a quick evade, block (and parry), and a few strikes. Combat feels well weighted. A successful block still feels perilous, as it should with sword just inches away from killing out bangs on your own steel with force.

It does have the draw back of making movement less key, based on the fewer than 10 encounters in this current build. Footwork is important to a fighter, be they using sword or melee, and while most action games don’t make movement too important, the ping-pong between combatants give the illusion they do (I’d argue Resident Evil 4 does it better than the typical walk/roll/sprint).

Ninja Theory has the right approach with Hellblade. It uses the limited third-person perspective to render Senua’s problems physical; and to “tell her story,” which happens to be the story of someone with mental illness, and “represent her character in a truthful way” that is unique to her experience. “What we don’t want to do is reduce [mental illness] to mechanics,” Matthews said, referencing things like Amnesia‘s “Sanity meter.” Hopefully Senua’s story will be a good one.