In upcoming online Vita action RPGFreedom Wars, you are sentenced to a million years in prison. Not a typo. In fact, everyone in this messed up future world is born with a million year sentence. But you can work that sentence down by taking on missions to rescue captured civilians from an attacking alien race.

But mess up on that mission and your sentence goes back up. Actually, this world is so strict that if you run you’re technically breaking the law, and that can increase your sentence.

Freedom Wars is fun. I played a few multiplayer missions recently at a preview event. This is a fully online title, but we went at it locally for now. I jumped in, cold turkey, on a rescue mission where giant alien mechs were stomping around and my teammates were working to cover me while I figured out the control scheme. We had to rescue 3 hostages successfully to reduce my personal sentence by 3,000 years. Not a bad start toward my freedom, eh?

Freedom Wars is a third-person game with a nice, wide view so you’re not always having to man the camera while fighting. That’s great. The control scheme is also great, though you wouldn’t imagine it would work so well on a Vita on paper. But everything’s covered, from the two attacks (you have swords and ranged fire) to weapon switching to grappling. Speaking of the grapple hook, it works for traversal and as a weapon. For the latter option, you can rip enemies down to the ground or hold on to them while you shoot them with ranged weapons.

Those weapons are everywhere, spread out over the field, so when you’re not getting blasted, you can go and nab those pickups to add to your arsenal 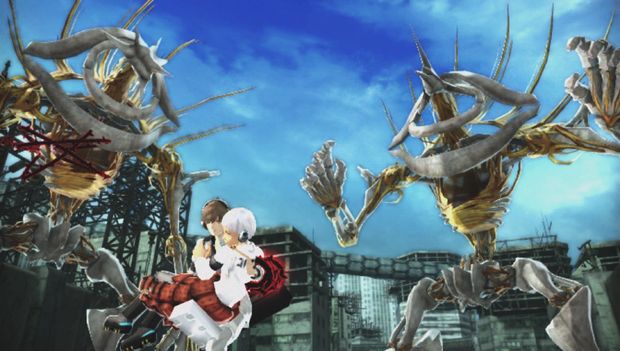 It wasn’t too long before I took down my first large enemy. I was surprised to see that one of the hostages was housed inside! After bringing it down, I picked up the hostage and immediately ran to a safe pod while other players tried to cover me. From the minute you pick up a hostage, the enemies will do their best to take you and the hostage out.

I was the hostage carrier twice more, which kept the heat on, but we succeeded, and now I’m down to anine hundred ninety-seven thousand year sentence. Nice.

I didn’t spend a lot of time with Freedom Wars, but I knew I had seen enough to be completely sold on it. It looks (like a PS3 game!) and plays great, gives me more reason to spend time with my Vita, and fits that multiplayer monster hunting craving I get every so often. There’s even region-based competitive multiplayer competitions planned — that should be good.

But it’s not just a single-player game. Sony tells Destructoid that there’s a single-player side that is some 25 hours long. Great mission-based multiplayer with a bonus full-length action RPG on the side? Sold.