Galak-Z has gone through some changes since we first heard about it. The space shooter from 17-bit Studios (Skulls of the Shogun) has jumped on the roguelike train. I mean space train. Damn. I messed that up.

I messed up plenty playing Galak-Z as well. It took a while just to unlearn Luftrausers flying controls, though that constant fear from imminent danger remains from a multitude of enemies. Peons, Gundam-esque mecha, space spiders. 17-bit’s Jake Kazdal explains that Galak-Z has the best AI around.

It’s certainly aggressive, with a little bit of wiliness. 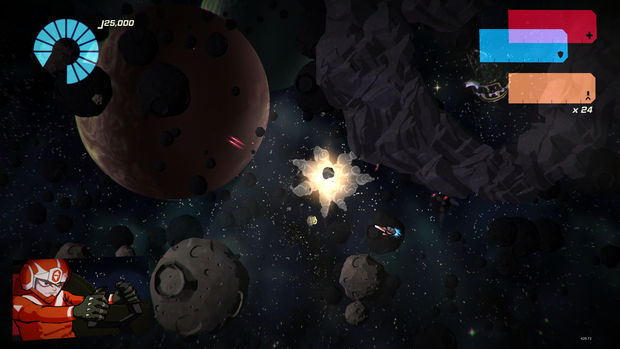 Galak-Z is simple to get into. You boost your ship around with either the forward or reverse thrusters. You start out with a piddly little red laser (that actually looks pretty cool). You have a set of arrows pointing you in the general direction you’ll need to be going to finish the level.

What started out as a finite space shooter turned into a procedurally generated roguelike when the team realized its procedural tools for level creation, meant to abet the process, worked well enough to do string together series of designed rooms into full on dungeons.

You’ll have a set path to get through a level, but you’ll want to explore the far ends of Galak-Z‘s space in an effort to accumulate cash for upgrades and give yourself a better chance at actually beating the game.

The ship controls are already smooth and fluid. I was quickly ping-ponging around and firing lasers while thrusting backwards. You also have an allotment of missiles with which you paint over enemies, Rez-style, and let loose a barrage. But you’ll probably want to save them for tougher foes.

There’s also conflict amongst the main enemy groups, as well as the third-party aliens, so you could drop in on massive space dogfights or try and lure vicious space creatures into a group of enemies and see if they thin each others’ numbers. Enemies also have states of alarm and recognition, allowing you to get an upper hand or maybe even do a little bit of sneaking by.

Combat is already solid and the roguelike elements should prove typically addicting. The art style, heavily influenced by 70’s/80’s sci-fi anime (largely Macross/Robotech) is delightful. It just pops on screen. Explosions look particularly fantastic and so do all the bold colors.

I’m ready to lose a lot of time to Galak-Z, probably on the Vita.