Getting Weird with Wes: A clam with an office, the Citizen Kane of video games, and finger your way to freedom

I can’t seem to get goats out of my life

[Getting Weird with Wesis a series meant to highlight all the bizarre shit floating around out there in the gaming universe. I hate normal things. Join me in celebrating the strange.]

I took last weekend off from Getting Weird with Wes because I was out in the woods, well, getting weird with Wes. What I was doing is not important, but if you live in Harrisonburg, VA, I’d strongly recommend using a filter on your drinking water for a few days. Just to be safe.

Did you miss me? I missed you! So I’m back on my bullshit and bringing you another round of weird games for this beautiful Sunday afternoon. Just read it. I know you have nothing better to do.

This is the story of a clam. A Clam Man. Join Clam Man on his adventures as a Junior Sales Assistant as he talks to co-workers, sits through meetings, and eventually gets fired once his mayonnaise company gets restructured. You know, typical clam man stuff. Once jobless and destitute, Clam Man wallows in despair, wanders the streets in search of meaning, and hits the bar to find some company at the bottom of a glass.

I don’t think I’ve ever had an existential crisis watching a video game trailer until now. Did anyone else tear up a little when Clam Man was lying there, hopeless, on his couch? Dude that hit me hard. D0oes that make it weird? The fact that a cartoon clam person lost his job shouldn’t speak to me on a personal level. Hell, I don’t even like the ocean or its inhabitants, so why should this one depressed clam get to me?

Maybe I’m the depressed clam. Maybe Clam Man’s woes represent the common working man’s greatest fear: Losing meaning. Losing a job is a monumental occasion. It’s the ultimate feeling of worthlessness. Your job comprises such a big part of your life that, whether or enjoy it or not, being told you’re not good enough to continue is such a hit to the id. Perhaps Clam Man is less the story of a weird character who loses his job and uncovers a sprawling corporate plot at the hands of a mayo conglomerate, and more the ultimate incarnation of the working middle class’ biggest source of dread.

The less I say about C. Kane, the better. I know that the whole point of this article is to use my words to describe these games, but man — this is the Citizen Kane of video games! How can a mere mortal such as myself possibly describe something as momentous, as ground-breaking, as incredibly important to the medium as C. Kane without selling it totally short?

Let’s instead speak of its merits, of which there are many. A tree repeats the word “tree” several times as you chat with it. A bangin’ hip hop track plays over the world map, reminding you of the point of the world map, as well as hammering home that it is indeed a world map. A shark makes you punch it in the face before belching on you. This is an actual description of an action in the game:

You smirk, put on sunglasses, get on your skateboard, and do a kickflip off Robodad’s face. He twirls you around and flings you out the window.

I am fully and truly in love. Also, check out this battle screen! 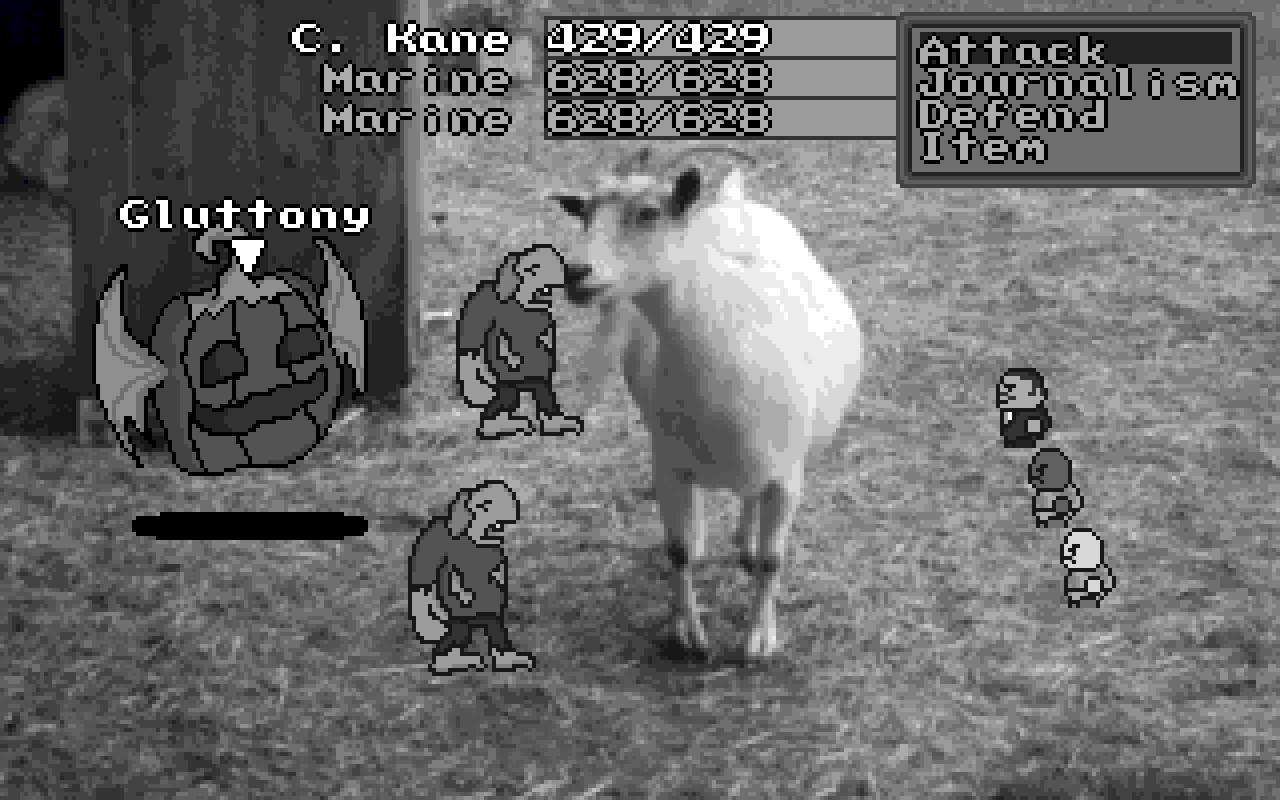 I don’t know whose side that goat is on, I just know I want to be on hers.

I try my best to be a humble man. I don’t brag too often, I try to keep my ego in check, and I strive to lift others up while not looking down upon my fellow man. But I’m about to break that oath and make this proclamation: My finger game is on point. I truly pride myself on being one of the best finger blasters in the game. No man, woman, or childcat platypus other person can withstand the furious fiddle of my phalanges, and few would even dare try.

Freedom Finger really looks to challenge even the best of us.

You’re a rookie pilot on the most fearsome ship in the galaxy. You must use the forceful blast of your finger to shoot down alien hordes to save the galaxy! Fist your way through barriers and really give ’em the business! Grope those slimy space cucumbers and toss ’em off, back to whence they came! The name of the game is using your space-hand as suggestively as possible, consequences and intergalactic law be damned!

Since Nolan North is the Samuel L. Jackson of video games and will take literally any and every role, he features in Freedom Finger. So does John DiMaggio, as well as a couple of other famous names I don’t immediately recognize. So if fingerin’ while listening to a ton of dope beats and famous people talking sounds like your jam, then beam yourself up when it releases later this year.

Just watch where you point that thing. I just cleaned my favorite blue dress.

See any weird shit out there lately? Send it my way, [email protected] Nothing is too weird.