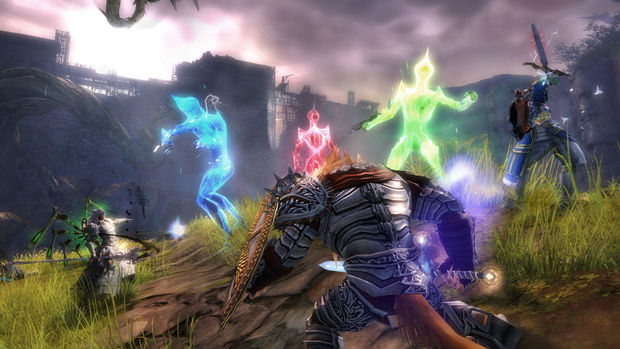 Nearly three years after the release of Guild Wars2, the base game is going fully free-to-play. Instead of following a method where users are required to purchase the core package before they are greeted with a subscription-free scheme, as of today, you are able to download it at will and start playing. To be clear,Heart of Thorns, the upcoming expansion (that launches on October 23), is still a paid affair, and it will also see the introduction of raids — 10-person instances that fans have been wanting for months.

For those of you who are interested, I had a chance to recently speak with ArenaNet’slead designerColin Johansonand presidentMike O’Brien on the new changes.

Opening up the conversation, O’Brien talked a bit about how the core message of the game is staying the same, despite the move to free-to-play. “We don’t want to ask for more money, and all of the additional purchases will stay the same” he stated. Going on, Mike noted, “What we looked at after the release of the core game, is things like ‘how can players catch up with their friends’ and this new model makes that easier to do. We’ve always said ‘if you wan’t Guild Wars 2, just buy the game, and we’ll provide free updates for it for months.’ We’ll continue to do that for Heart of Thorns: just buy the expansion, and you’ll get every update for free.”

Another big new change is the addition of raids, which will make their debut in Heart of Thorns. Speaking on this new adventure,Colin Johanson, keeping with the spirit of the game, insists that “this is our way of doing things differently, even with the traditional format of raids with other MMOs. We’re getting rid of barriers to entry. The way Heart of Thornsis built is by way of masteries, which will upgrade your character beyond the typical gear-based setup of other games. In that regard, raids will still be relevant six months later, and won’t be completely replaced by a new tier of gear.”

Going on, Johanson stated that “although you can’t necessarily PUG (pick-up-group) these raids, they are skill-based. In other words, you can use any combination of characters to complete them.” Upon probing him a bit, asking whether or not it was difficult to design raids around the lack of a trinity (healer, tank, and damage), he responded with, “it’s not necessarily tougher but balance them within our game, but they will be more fun since everyone can fulfill any role. You don’t have to wait 40 minutes for your healer to get online, and you can use any class you want to play. It really is all about skill.”

If ArenaNet and their team can follow through with these promises, an accessible yet challenging raid scheme would be an enticing prospect for players old and new. I’m anxious to see what they come up with when Heart of Thornsfinally comes out.