In the middle of last year Nintendo announced it would try out the whole free-to-play scheme with Steel Diver, to the collective sighs of relief from various Nintendo series fans. Now we have details on just how that pricing model is going to work, and it’s a bit of an odd one.

I also got to play the new Steel Diver: Sub Wars, which is dramatically different from its 2D predecessor. This time around, it’s fully 3D ship warfare with 4 versus 4 multiplayer.

Sub Wars‘ free version includes two single-player missions (with three difficulty settings) and two playable subs (the second is unlocked when you play the single-player). On top of this, the free version can engage in both local and online multiplayer. The catch here is that if you try and play online, you’ll likely be outclassed by better subs and only be effective if you’re 1) talented, 2) playing against other people using some of the starter subs.

The free version is more like a demo with multiplayer when it comes down to it, but those desperate for something to play without spending money might find something to enjoy.

The proper version includes the potential to unlock all 18 submarines, which are unlocked by doing well in multiplayer play. There will also be five individually priced, WWII inspired DLC subs down the line. 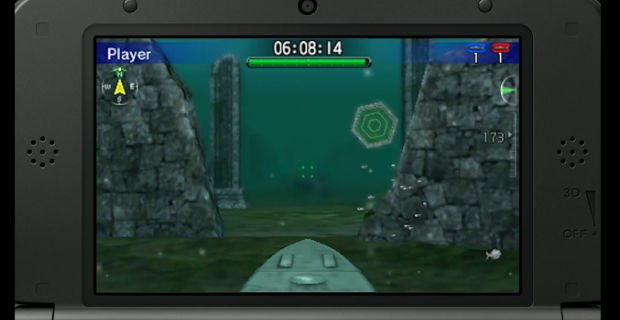 Aside from more ships with different stats that encourage different playstyles, there is an added customization element in your ship’s crew. Crew members will randomly spawn on islands during multiplayer. Pick them up, and you can add them to your stable for various stat changes — +2 to turn rate or +1 to surface speed & – 1 health.

These can factor into your playstyle — if you want to be incredibly fast to the detriment of your health gauge, for example. You can also get a pink and purple daisy pattern (and several others) for your ship and communicate with your teammates on the bottom screen with Morse code (which will come up on their bottom screen as text).

As for the gameplay itself, the four on four multiplayer will be filled with bots if need be. Otherwise, it plays as if you’re piloting the sub in first person. You set your engines to forward or reverse and manipulate your orientation with the circle pad as you putter around and try to shoot off missiles at other sandwiches (I’ve written “subs” too much).