Hours of fun in a bite-sized package, free of charge

Nintendo released a demo for Smash Bros. 4 on the 3DS to Club Nintendo Platinum members last week. Pandemonium in the Smash Bros. community ensued. It’s a relatively small piece of the game — five characters, one arena, two modes (solo or group), and a little sandbag action during loading times on multiplayer matches. Don’t let that fool you though. It’s still got enough content to keep you busy for days, maybe weeks.

Last week’s version of the demo has unlimited plays. The public demo releasing on the eShop tomorrow morning does not. That’s going to be a problem for a lot of you. Unless you plan to keep the demo running on your 3DS until the game comes out on October 3, chances are you’ll run out of plays before you’ve gotten your fill. 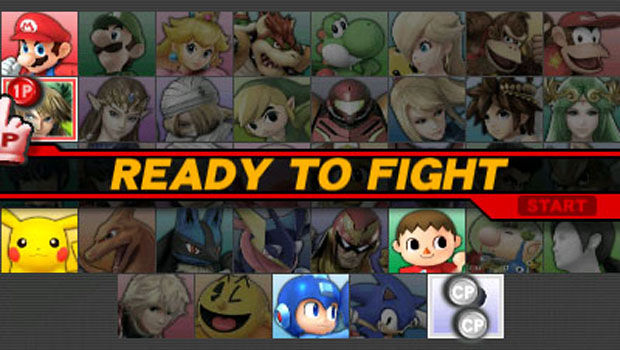 While you’ll get a look as the game’s full starting roster, only Mario, Link, Pikachu, Villager, and Mega Man are playable. The three veteran characters play pretty much as they did in Brawl, with a few tweaks here and there that make them a little more competitive.

Villager is really the star player here. Not only are they the first character in the Smash series who has four distinct character models (two male, two female), but they also offer a play-style that we’ve never seen in Smash Bros. before. They’re not a “projectile character” or a “rush-down character” or a “tank” or some other character type you’ve seen in fighting games before. They’re a “passive-aggressive troll,” and its fantastic.

Everything about them — from their animation to their move set — speaks to the idea that they are kicking your ass by accident. They’re much more concerned withworking on important things like gardening or playing with fireworks. Other than their boxing-glove combo (mash A), almost all their moves involve some non-combat action that just happens to involve hurting someone very badly. From tripping and dropping a potted plant (into someone’s face), to whipping out Lloyd (the mailbox Gyroid) and taking him for an explosive ride into the sunset, Villager usually looks like they’re just pursuing happiness in the ways they always have. If you happen get hurt in the process of those pursuits, that’s probably your fault.

The move that best defines the character is down B. Hit it once and Villager plants a tree. Hit it again and they’ll water it until the tree grows to full size. Hit it two more times and they’ll chop the tree down. The whole process takes a few seconds. Until you see how much damage the move does, you may not think it’s worth the time investment, but it may be the most effective move in the demo. An easy and effective Villager strategy is to knock an opponent off the edge, quickly plant and water a tree near the edge, then wait for them to come back with a recovery. If you time it right, they’ll have have little recourse other than to take the hit and be instantly K.O.’d just as they return to solid ground.

The tree also works as a standing shield against any opponents’ attacks. Smart Villagers will quickly grow a tree to their backs, effectively snuffing out any potential attacks from that direction.In fact, wise opponents will probably stay as far away as possible from a villager who’s got a tree handy. Messing with a Villager near a tree is like bringing a knife to a gun fight. Odds are not in your favor.

The exception to that comes from taking on another Villager. Not only can a Villager use another Villager’s tree against them, but they can also put it on their pocket should it fall nearby. Neutral B allows Villager to grab any projectile, including the tree, and pocket it for later use. As if they weren’t already more dangerous than they look, knowing that any Villager you’re up against may have a tree in their pocket makes the character one of the most unassumingly deadly fighters in Smash Bros.history. 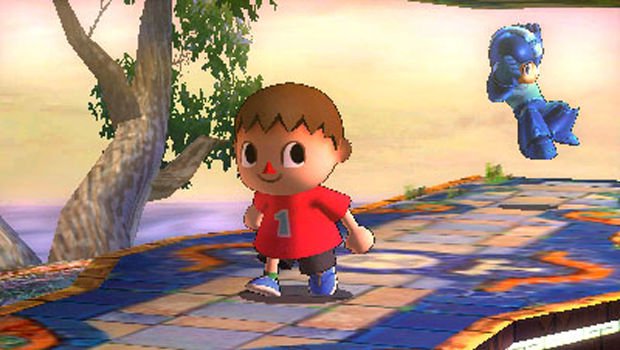 That also makes a semi-skilled Villager player living hell for Mega Man. Most of Mega Man’s A and B moves are projectiles from past games, all of which appear to be pocketable. His side A allows him to run and shoot at the same time, firing those little yellow pellets that anyone who’s ever played his games are abundantly familiar with. Being able to throw projectiles while walking gives Mega Man a unique advantage, but it’s not enough to balance out the ways his moves can backfire.

His Side B (Metal Blade) tosses out his iconic saw attack from Mega Man 2, but if it misses and lands elsewhere, and enemy can pick it up and toss it back at him. His Up B recovery causes his loyal canine companion Rush to appear and offer up a vertical trampoline boost. It’s got great height, but can also be used by opponents who are quick enough to time a tap off Rush’s back before he falls to his probably death.

This makes Mega Man a treat for those who get off on continuity and references to past Mega Man games, but severely limits how effective he can be in combat.Or maybe ZeRo and I just suck at playing him. Regardless, he’s a treat for series fans, which will be enough for most of us. Everything about him, from standing animation to Final Smash is a spot-on recreation of something from past Mega Man titles. I may not be able to win with him as often as with Villager, but I can’t help but love him anyway.

There’s no way to play the demo with items off [Edit: My mistake! Playing on the Omega version of an environment, discussed later in this write up, does in fact turn off items. Thanks for pointing that out Fenriff!]so high-skill-level competitions may not be in the cards for many of you. It’s probably for the best, though. It would be a shame for anyone to miss out on all the awesome items here in their pursuit of tourney-level play. There may be even more items here than in the entirety of the original Smash Bros. 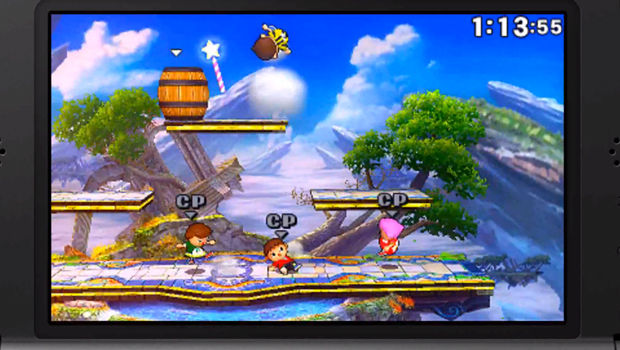 Pokeballs offer a nice mix of familiar faces. I’ve seen Fennekin, Snorlax, Staryu, Dedenne, and Gogoat so far. There are also new, rare Master Balls now that hold legendary Pokemon. The two I’ve seen held an Entei and an Arceus, and they were pretty lethal.

There are plenty of other interesting new high-power items like the Blue Shell (Mario Kart), Fireball (Super Mario Bros.), the Beetle (Skyward Sword), Galaga Boss (Galaga), X Bomb (Kid Icarus: Uprising),Bees (Animal Crossing), Olimar’s rocket (Pikmin),and the Daybreak (Kid Icarus: Uprising). Most of them can kill in one hit, though they are easy enough to evade if you’re ready. They’re joined by items we’ve seen before like the Home-run Bat, Dragoon, Hot Curry, Golden Hammer, regular hammer, the Laser Sword, and maybe more that I probably haven’t seen yet.

Though all those items may make a traditional tournament-level match in the Super Smash Bros. demo unlikely, there is at least on concession for those looking for a more “fair” match. Though there is only one arena (Battlefield), you do have the option to play it in its standard configuration (which includes three platforms) or in its “Omega” configuration which is completely flat, Final Destination-style. If you and your friend agree not to use any items, then you can effectively play some one-on-one matches in the standard tournament style. Good luck on resisting the urge to pick up any weapons, though. The promise of a potential team up with Mother Brain is way too hot for most to resist.

As for the presentation, the graphics run at a consistent 60 fps and look extremely nice — much better than you’d guess from screenshots. I didn’t experience any lag playing the game with three local friends, which is a relief and something of a surprise given how much the game demands of the 3DS hardware.

There’s only two in-fight songs here — the Super Smash Bros. theme and the more rare Melee title music. Both are appropriately rousing, but like many of you, I have a soft spot in my heart for that Melee feeling. There’s also a callback to the music of the original N64 Smash Bros. that plays after you’ve completed a match. Now that Smash Bros. has been out for a while, the series can now reference itself just as much as it does other Nintendo series, and I love it.

I feel badly for the people who will end up with the version of this demo that has limited plays. I have the unlimited version on both my launch-day 3DS and a 2DS I picked up on a flash sale because I wanted the option to play this game with friends wherever I go, and so far it’s been worth it. I doubt I’ll splurge on two copies of the full game when it comes out in two weeks, especially with the Wii U version looming on the horizon, but I do plan on keeping these demos installed for a while. They’ve already provided me hours of raucous multiplayer combat while introducing a few previously uninterested friends to joy of Smash Bros.